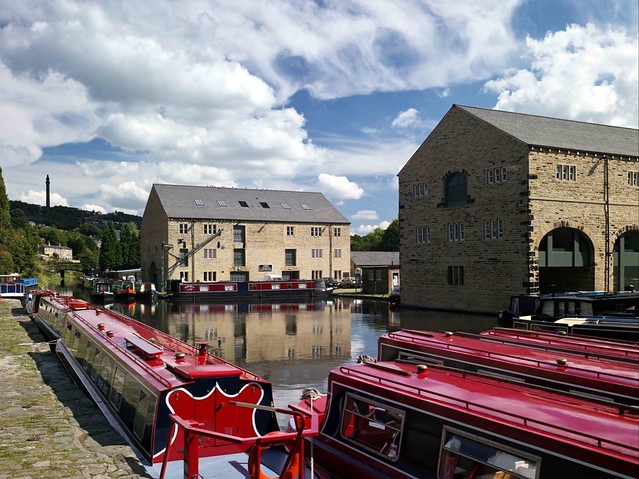 This is an excellent example of regeneration led by local people and businesses, which is rare to find a regeneration scheme that is not either led by the public sector or by a developer. The partnership in Sowerby Bridge has taken a very commercial approach but their interest has been regeneration and heritage rather than development.

Access is the virtue of the place – roads, canals, railway, and now good telecoms have made the rural setting appealing to SME’s drawn by its industrial heritage and rural context.

The strong mix-of-users including workshops, restaurants, offices, the boat yard and sea scouts – but not housing – have ensured that it remains a real place. Major residential development would have undermined this by gentrifying the area although a small amount of housing may have been possible.

The conservation of the existing buildings has been undertaken sensitively and has been successful in bringing them back into use. Some of the early conversion schemes may have been slightly over respectful to the area’s heritage and there is no problem with the more contemporary approach to the buildings.

There is a danger that the space between buildings becomes dominated by cars. Public areas could be better designed and managed as urban spaces.

In 1996 a boat arrived in Sowerby Bridge that had travelled over from Manchester on the newly reopened Rochdale Canal. In the same year the Sowerby Bridge Wharf Partnership was formed bringing together local businesses and leaseholders, English Heritage, The Civic Trust and Yorkshire Forward coordinated by the Prince’s regeneration Trust. This was the culmination of a campaign dating back to the mid 1970s to highlight the importance and the potential of Sowerby Bridge Wharf.

The restoration of the Rochdale Canal had been achieved by stealth, through a series of environmental improvements that had restored sections of the canal even when the reopening of the whole seemed impossible.  Meanwhile a campaign had been fought in Sowerby Bridge to prevent the canal basin being filled in for use as a car park. 1996 may have been the end of these long campaigns, but it was also the start of a process that would see the refurbishment of the wharf and its development as a place for leisure and business.

The first canal boat had arrived in Sowerby Bridge in 1759. The extraordinary thing about this date is that – as children across the UK are taught through the National Curriculum – the world’s first industrial canal, built by the Duke of Bridgewater, wouldn’t be opened for another three years. The ‘canal’ in Sowerby Bridge was not a canal at all, but the end of the Calder and Hebble Navigation, a system, of engineering works to make navigable the waterways running from the Pennines down to the ports of the east coast. Then in 1804 another canal arrived in Sowerby Bridge when the Rochdale Canal was cut through the Pennines creating a link to the textile towns of Lancashire and the ports of the Mersey.

So Sowerby Bridge became the transhipment point between the canal systems from the two sides of the country as well as an important port for the surrounding textile towns.  Just as Sowerby Bridge sits in a pivotal position of the UK’s canal network so it occupies a similarly important position in the history of the canals. It’s earliest warehouse – romantically called Warehouse 4 – dates from 1770 and is one of the earliest canal warehouses in the country. The adjacent Salt Warehouse was built in 1790s and on the slope above the basin is a complete set of buildings including the weighing house, the overseer’s house, stables and extraordinary mixed-use building with warehousing on the lower floors at the canal level, and a Methodist Sunday school above accessed from the high street.

Such is the evident important of the complex that it comes as no surprise to see the wharf cherished and refurbished. However as with so many regeneration stories, what seems obvious in hindsight was anything but at the beginning. Even in 1996 after the battle of the car park had been won, and the campaign to reopen the Rochdale canal succeeded, regeneration was far from inevitable and there were still battles to be fought. One of these was to prevent apartments being built on the wharf, something that had been proposed in a masterplan prepared for British Waterways. Another was to persuade British Waterways that it didn’t need to achieve best value on the site but could weigh this against heritage issues.

The wharf was already is a pretty poor state of repair when the waterways were nationalised in 1948 and it went down hill from there. In the 1970s British Waterways sold a lease on the site to a local person who gave undertakings to refurbish the complex, something that he was never able to do. At the time the people on the site were the Sea Scouts. The lessee let the buildings to three sub-lessees and when in the 1990s pressure from British Waterways caused the head lease be put on the market, it was the three tenants who were instrumental in bringing in the Prince’s Regeneration Trust and forming the Sowerby Bridge Wharf Partnership to spearhead the area’s regeneration.

The problem was that British Waterways were insistent that they were required to make a commercial return on the buildings, which made it impossible for the partnership to put together a viable scheme. Representations were made to the Commons Select Committee on Environment and Transport who made a site visit led by their formidable Chair Gwyneth Dunwoody MP. The committee made it clear in no uncertain terms that the British Waterways position was wrong not correct, opening up the way for the partnership to buy out the head lease so that regeneration could proceed. By that time Warehouses 1 and 2 had already been refurbished by British Waterways but the Salt Warehouse and No. 4 Warehouse were in a very poor state. A cocktail of funding was put together by the partnership amounting to £2.7 Million including funding from Yorkshire Forward, the Council, English Heritage, Lottery and investment from British Waterways. Since that time the two vacant workspaces have been refurbished for business use. The road access to the wharf has been improved and widened and the gatehouse converted to a café with a new sculpture by Roger Burnett on the high street. On the hillsider the overseers house has been refurbished for a dental surgery with the stables below providing creative workspace. The wharf itself is busy with moorings and the comings and goings of Shire Cruisers who operate the boat yard and a leisure fleet from the basin.

The wharf has become a lively part of Sowerby Bridge life. In addition to business space the warehouses include a number of pubs and restaurants, which have become part of the leisure circuit in the town. It is also provides the venue for the culmination of the Sowerby Bridge Rushbearing Festival which involves a maiden, a rush cart and a good deal of real ale.

There were those on the academy visit who questioned why the wharf was not livelier, and wondered whether the partnership was right to be so against any housing development. It is true that the wharf is a real place of work so that the major apartment scheme proposed in the past would have been inappropriate. However it is not clear what harm that a greater mix of uses would do to the attractions of the wharf or to its existing occupiers. This may be slightly symptomatic of the drawbacks of a heritage led approach to regeneration that, for example, bemoans the replacement of timber piling on one of the warehouses from a heritage perspective despite this not being visible and worried about a contemporary lift shaft added to another building. From the perspective of an urbanist there would be value in encouraging some modest development to create a more clearly defined public realm and a greater intensity and variety of uses.

Notwithstanding this, the achievement of Sowerby Bridge Wharf is impressive. It would be impressive in a large city, but to create a regeneration project of this size in a town of less than 10,000 people is remarkable. The Wharf is now home to 270 jobs and a range of start up and relocated businesses. It is testament to the determination of a group of people over many years who have created a special place and one that has transformed the town.