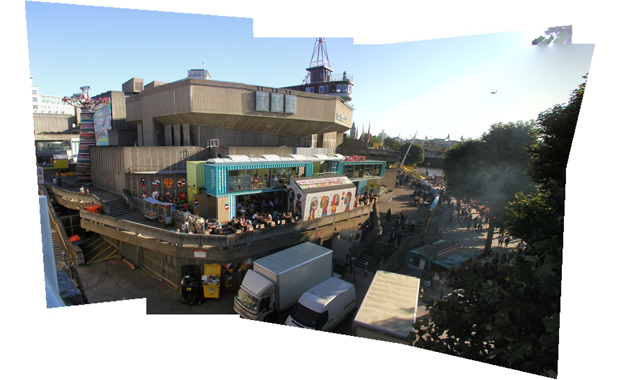 On the 4 September 2012, Academicians gathered at the Queen Elizabeth Hall on London’s South Bank for a tour of Southbank Centre to review the numerous installations created for the 2012 summer Festival of the World. The visit was a second chance for the Academy to review the way in which Southbank Centre has been using their festival programming as a way of experimenting with the use of the site to inform the brief for possible longer-term changes. The first visit was at the end of summer 2011 during the 60th anniversary celebrations of the Festival of Britain. Steven Smith of Urban Narrative, the tour guide, has been working closely with Southbank Centre on the festival programme for the last two years.  Many themes were explored during an enjoyable evening spent exploring the site.

Festivals
Southbank Centre’s creative director Jude Kelly is working with the idea of the festival as a way to connect Southbank Centre with its origins in the Festival of Britain, and as the most relevant form in which to present contemporary arts of all kinds. The festival format enables the exploration of artistic work to take place both within the formal venues of Hayward Gallery, Queen Elizabeth Hall, Purcell Room and The Royal Festival Hall, and in the vast number of large and small spaces that surround the venues, both internally and externally. This approach to artistic programming has transformed Southbank Centre from being a set of venues, foyers and public spaces into a much more complex and engaging total arts place. Public spaces have become animated by events, previously closed or disregarded spaces have been opened up for public use, a whole neighbourhood of London has become infused with a sense of creativity and joy.  There is much that urbanists can learn from this curatorial approach to managing the city.

The Ephemeral
An essential characteristic of festivals is that they are time limited, normally lasting just a few months. Festivals are a special time where the normal rules of life are set aside or relaxed to allow the unconventional or experimental to be explored. Most importantly a festival is concerned with the creativity of the ephemeral. Event and performances are short lived, props are disposable, and installations are torn down after the festival is completed. The temporary nature of the enterprise imparts a certain lightness that allows for experimentation at very low cost and for places to be profoundly changed very quickly.

There is bias in the training of the environmental professions to assume that addressing major urban issues requires ponderous changes to be made to the city fabric or what might be called the material city. The Southbank Centre experience suggests an alternative approach, which prioritises making change through the creative use of events, performance, props, and temporary installations or what we might call the ephemeral city. The Southbank Centre experience is a reminder that it is the ephemeral that animates city life and that focusing creativity in this area can result in profound, effective change achieved quickly and at very low cost. Additionally the approach provides live evidence to inform the brief for more permanent changes that may be required. It suggests the joyful idea that a transformative festival to inform the urban design process should precede all major projects.

Changes from Two Summer Festivals
Below are just some of the changes that have been realised through two years of festival work:

Stairs
The multilevel landscape of the 60’s buildings has for many years been considered difficult to access and navigate. Two new temporary staircases have been installed. One linking Festival Square to the Hayward Gallery was completed in 2011. A second, incorporating a performance stage, linking Queens Walk to the QEH and to the main access staircase to the garden. Both seem to provide natural linkages suggesting more permanent connections might be desirable in these locations.

The Waterfront
Installations on Queens Walk bring the festivals onto London’s South Bank promenade creating the opportunity for incidental public interaction with the Southbank Centre’s cultural programme. This year the waterfront works included, Rainbow Park by Adam Kalinowski, an installation of World Crates by Lyn Atelier telling the fascinating story of art changing communities around the world, and a new ticket office providing a new point of access and information to the Southank Centre arts programme.

Undercrofts
For 50 years the undercroft spaces below the QEH foyer have been underused or closed off. This year stores and temporary workshops were relocated and an ‘artists village’ created as a place for interaction between the many hundreds of artists, volunteers and Southbank staff who work together to realise the intense programme of festival events.

QEH Waterfront
The wall of the QEH facing the river seemed to have potential for more activity. In 2011 a Portakabin located here (a left-over installation from works to the Royal Festival Hall) was transformed into a lively Indian beach cafe. Spurred on by the success of that experiment this year a more substantial Mexican restaurant has been created in a container based installation designed by architects Softroom.

Icon
For the last two years artists Pirate Technics have selected the Waterloo Bridge side of the QEH as the location for a major iconic installation as a symbol for the festival as a whole. In 2011 they created a magnificent Fox as a celebration of the British landscape. This year a work called Under the Baobab Tree celebrated diverse cultures gathering.

Hungerford car park
Temporary venues, and funfair rides have transformed the utilitarian car park to create a brief exuberant escape from daily life. Here we can see most clearly the power of the temporary to transform places.

Conclusion
The Southbank Centre approach provides an alternative way of orchestrating urban change by prioritising ephemeral change before considering the need for more resource and time consuming upheaval to the material city.

Royal Festival Hall
The Royal Festival Hall is perhaps the most permeable public building in Britain with every part filled with ever-changing activity both internally and in the surrounding external terraces and spaces. Some of the events are organised and staged by Southbank Centre, others seem to happen spontaneously as the public adopt the space for meeting, learning, creating, dancing, chatting and work. It serves as a model for the interaction between the fixed (Grade I Listed) fabric of the building and the fluidity of constant ephemeral change that animates the use of the space.

The QEH Roof Garden
Originally designed as ‘The Sun Deck’ above the QEH foyer, this space had been closed for many years due to lack of access and supervision. A low cost lift, a pop up cafe and a remarkable instant garden organised by the Eden Project and St Mungo s charity created London’s latest new public garden space.

Handrails
A simple process of wrapping the great blocks that form the handrails to the buildings with printed cloth has created a surface for temporary graphics and word installations that temporarily transforms the architecture.

Terraces
Working with artists to explore the site has resulted in installations in found locations selected by artists. In 2011 Ben Kelly created a dry stone wall installation near the Hayward entrance. In 2012 children from Hounslow Heath Infant and Nursery School, working with artists Small Earth, transformed the terraces into a surreal installation of their imaginations entitled London Earth Creature. The works have transformed perceptions of the walkways from being utilitarian access ways to being places for play, for quiet contemplation or a family picnic.

The Hayward External Gallery
Opening the QEH Roof Garden also reopened a long forgotten external gallery space on the side of the Hayward Gallery. Two years of installations have reclaimed this space as an outdoor gallery.

Festival Square
A diverse programme of markets, food festivals and bandstand events has filled Festival Square with people and life throughout the summer.