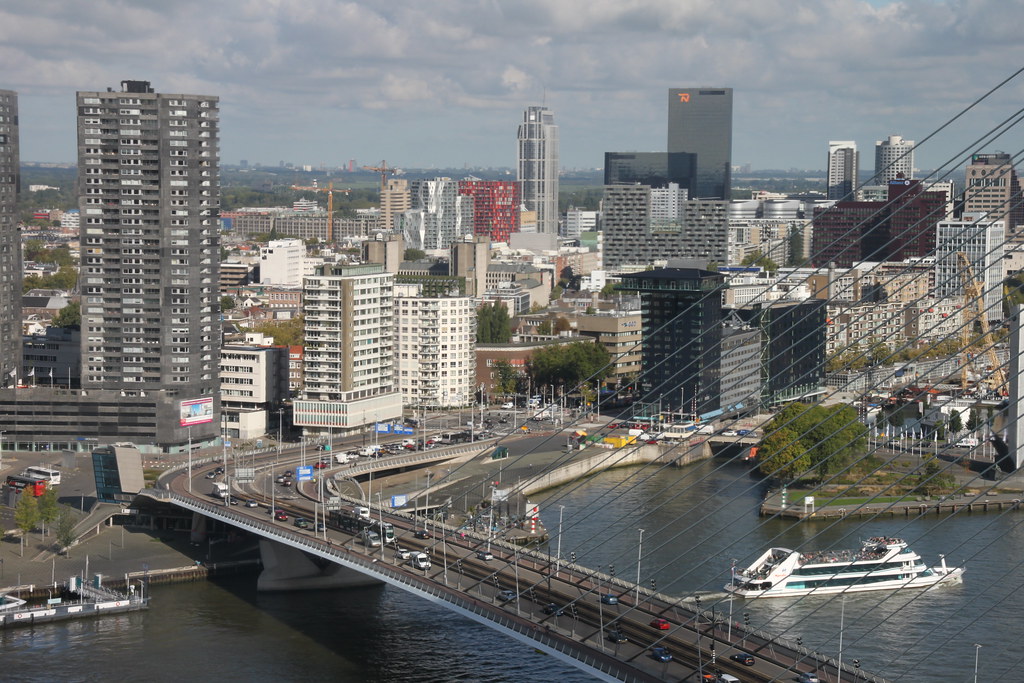 1. Level of autonomy
A high level of self-determination, with reliable income from the port in which it shares, and substantial landholdings to meet the needs and aspirations of the community, and provide additional income. This concentrates responsibility and authority, making decision-making easier and quicker.

2. Leadership
Key figure of the Mayor, appointed by Government, as in other major Dutch cities, and thus outside the local political structures. (There is no chief executive). The Mayor is appointed for six years, separate from the local electoral process, and can be reappointed for a second term. Citizens have direct access to the Mayor, who has no portfolio and no overt political agenda, and can focus on achieving the agreed objectives of the city. The Mayor engages directly with people, groups and businesses as issues and priorities demand.

3. Clarity of roles
A clear allocation of responsibilities between public, private and third sector agencies, co-guided by a strong adherence to shared objectives. The municipality takes responsibility for ensuring the necessary physical and social infrastructure is in place to support the investment in commerce, industry and private housing by private developers. The municipality provides and maintains a high standard of public space, and developers respond by commissioning lively and attractive buildings.

4. Urban quality
Social and economic objectives can be realised by making the city more attractive – to live and invest in. This is not just an aesthetic objective, but improving the quality of the buildings and spaces is seen as one way of enticing the middle class and their economic influence back into the city centre.

5. Positivity
The city encourages new initiatives – in public activities and private enterprise. It tries to find ways of enabling new ways of thinking and doing, and will waive standards and obligations, if
it seems appropriate. Beneath the strong visions and the master plan that will implement it, there is a culture and tradition of just doing things to see what happens.

6. Culture of openness
Very little seems to be hidden, and very few places seemed off limits. We saw very few security staff. The school visited showed no concerns, and the children were happy to see us and hear us
speaking English, rather than being fearful of the presence of strangers. When we visited a building site we were invited in – with appropriate but not overbearing security – we were
welcome to look around. We didn’t feel special – it all seemed natural.

Rotterdam is the second largest city in the Netherlands, after Amsterdam, with a population of just over 600,000. It stands within the intensively developed region that spans the Provinces of North and South Holland and Utrecht, known as The Randstadt. Its history is influenced by its historic function as a port at the confluence of the River Rotte and the Maas. The damming of the former is how the City got its name, and the line of this dam can still be followed in the street plan of the city centre.

The trading wealth of the city was supplemented by the entrepôt and processing industries that grew up alongside the port, especially food processing. The importance of the port led to the heavy bombardment of the Second Wold War. This and the firestorms that followed razed the entire city centre and much of the surrounding area. The early Twentieth Century Town Hall and Post Office were among the few surviving buildings, more as a result of their robust construction than the apocryphal story that the Nazis had decided to preserve them for future use.

By the 1960s, the port was becoming too small and shallow for the increasingly containerised international merchant fleet. The City and the Port Authority, with central government help, acquired and developed large areas of land downstream as Europoort. This not only allowed the port activities to continue and flourish, but today provides a large and reliable income to the public purse of the City. The relocation of the port has also released over 1.5km2 of land and buildings for reuse and redevelopment. Investment in road and public transport connections is helping to attract public and private investment to this area, and the economy, now growing after the post 2007 recession, is beginning to respond.

The structure of local government in the Netherlands gives large cities like Rotterdam a distinct advantage over smaller settlements and competitor cities in many other countries. The City’s Mayor is appointed rather than elected for periods of six years and is both the leader of the Cabinet and the chief executive of the staff. This separation from local politics and the electoral process not only concentrates authority but encourages long term and consistent stewardship of the public purse and policy. The lack of direct democratic control does not seem to be a problem, and citizens’ access to the Mayor, and his (currently a man) ability to directly support citizen activities, seems popular. The stability and certainty that results is evidently attracting new and returning businesses to the city, following a period when Rotterdam had been losing businesses and jobs to what were considered more attractive cities in the Netherlands, Germany and beyond.

The Rotterdam strategic vision adopted in 2007 and running to 2030 has informed the current spatial master plan that focuses on three parts of the City: the city centre; the former port, now the Stadthavens (City Harbour); and the southern side of the City. The city centre has been transformed over the last decade and will probably continue to improve with a tapering level of city involvement, allowing greater focus on the Stadthavens, and in particular the south side (Rotterdam Zuid), which has suffered the greatest severance and deprivation.

The main improvements in the city centre are guided by three ‘keystone’ objectives:

The realisation of these objectives is already evident in projects completed and underway throughout the city centre, such as:

The success of these initiatives is reflected in the city’s rising up the ranking of liveable cities; the New York Times voting Rotterdam one of the World’s 10 must-visit cities; and endorsement by The Rough Guide of its rapid improvement.

The strong leadership of the Municipality by the Government-appointed Mayor is reinforced by a Cabinet of five full-time Aldermen with direct responsibility for the staff and management within their Directorates. The Mayoral appointment is a carefully prepared process which follows canvassing of candidates and negotiation with, and acceptance of, local parties. Unpopular, and therefore impractical, appointments are unlikely. The Mayor is appointed for six years, with an opportunity for reappointment. This takes the role out of the local political arena and encourages a strong focus on the quality of local services and the achievement of local objectives rather than national political objectives.

This is further strengthened by the considerable autonomy of the Municipality in plan-making and decision-taking, its extensive landholdings that help to secure new development, and the reliable and substantial income it gets from the port, parking charges and development of publicly-owned sites.

The rebuilding of the city centre after the War was an opportunity as well as a challenge. It was not successful in all places, however. The centre was developed on American city planning lines with an extensive layout and discrete mono-functional zones. Many of these areas are now being revisited. The City has taken the trouble to learn from other cities and explicitly acknowledges the influences it has used. It has also welcomed experts from around the World to visit and advise, and has used this advice to shape its future plans and policies. These external perspectives have helped the City to recognise its assets; built heritage, such as the Van Nelle factory complex which is now a World Heritage site; the distinctive linear open spaces that follow the line of existing or past singels – the canals of the old port. It has also addressed its liabilities:, the mono-functional zones and high level road and rail links which severed connections between the city centre and the southern side, now being removed; the redundant former port areas that were attracting crime and anti-social activity; and the continuing challenge of the low-lying waterside land on which the City stands.

The city’s land ownership and commitment to an attractive city has stimulated the commissioning of innovative and distinctive new development by leading Architects. The rebuilt Centraal Station, the Erasmus Bridge, and the De Rotterdam ‘vertical city’ complex on Wilhelminapier set a high standard for others to follow. The new Markthal, remarkably the country’s first covered market hall, is nearing completion on Binnenrotte. Located next to the extensive open market, the new building includes shops, flats and parking in a megastructure that adds another innovative form to Rotterdam’s character, opposite the equally distinctive Blaakse Bos (the cube houses), and Blaaktoren (the pencil tower). This willingness to explore new urban forms has so far avoided mere novelty through the rigour of the design and construction, and the confidence they display in offering new forms of accommodation.

Balancing this urge to innovate are examples of adapting existing buildings to meet modern standards and expectations. Traditional tenements are being converted into family houses in the regeneration of Kartendrecht, industrial buildings are being adapted for new employment and social uses here and in ZoHo, and the listed Justus von Effen, an historic 1920s apartment complex, has been restored and adapted for modern residential use.

The relative prosperity of Rotterdam and the Randstadt region in the European and global contexts masks the fact that until recently the economy had slowed dramatically, and the Municipality has had to accommodate a 70% reduction in central government funding. The City has held its nerve however, and remained focused on its principal aims, with an adjusted timetable for implementation. The confidence this generates is evident across the public and private sectors at all levels.

While we were dependant on our hosts for the programme and the people we met, we found a unity of purpose and expectation that is unusual and powerful. This unity is helping to focus everyone’s efforts on the City’s agreed priorities, and the adjusted implementation programme is allowing meanwhile uses to flourish with broad support, adding to the vitality and variety of the city centre and creating new business and community development opportunities.