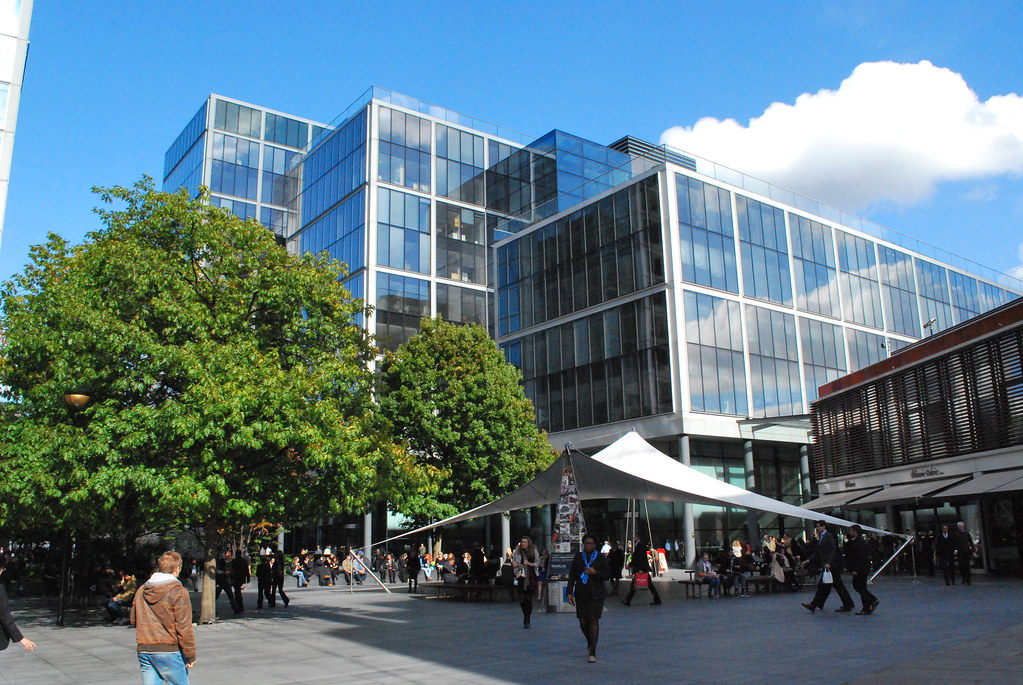 Privatised Public space
This development raises a lot of important questions about the nature of privatised public space.

Tensions of real v manufactured ‘life’
The level of control required by the developer generates a relatively sanitised space into which carefully selected ‘life’ has to be injected rather than it occurring naturally as with more organic or uncontrolled spaces.

Invitation across boundaries
The boundary condition is always interesting in urban design terms. In this case the tensions at the border between ‘the city’ and the East End remain sufficiently tangible to make this an inviting space.

Giving back
Sufficiently generous contributions to the wider good by the investors can pay dividends in terms of public perception of the ‘brand’ and relationships with the surrounding community.

Potential vulnerability of shared-space
The success of spaces such as this must be vulnerable to a change in personnel or management regime and could change rapidly if the great efforts of the agents were to be curtailed.

The Wikipedia entry for Bishops square defines it as a ‘large commercial property development in the Spitalfields area of London. Previously owned by Hammerson it is now owned by JP Morgan. It sold for £557 million in 2010 and has been cited as an example of ‘privately owned public space’. So this is of particular interest in urban design terms as we continue to debate the issues around the meaning of public space. Designed by Foster and Partners this development sits on the site of the annexe to the Old Spitalfields Market. The original two-storey market buildings along Brush Street have been retained, with some incorporated into this scheme, along with the listed Horner Market Building, to the east. The latter is linked to this development by a covered lightweight canopy.

The accommodation is housed in four simple parallel rectangular volumes of six, eight, ten and thirteen floors, with the lowest block closest to Brushfield Street to the South. The main blocks of offices are linked together with three separate glazed atria which are not publically accessible and three of the blocks have roof gardens with cafes and bars for the occupants. In terms of the ‘place’ that we are assessing there was a certain amount of discussion, and confusion, as to where the boundaries might be drawn. We came to the conclusion that it was essentially the new buildings, some 1.1 million square feet, together with Lamb Street to the North, Crispin Place which joins the development into the Old Market, and Bishops Square, the small plaza on the SW corner of the block. Theoretically this does not include the main body of the Spitalfields Market in the old Horner Buildings directly to the East, but given the way in which these spaces merge it is impossible to see them in isolation.

We were welcomed by the Estate Management Team who are employed by CBRE, the managing agents for JP Morgan. We were treated to a fascinating presentation by the people who manage the public space, and who were clearly much more enthusiastic about the market, the events, the stall holders and working with the local community than about the million square feet of offices above.
It was, we were told, a brave commercial move to cross the eastern city boundary of Broadgate into the East End. Having done so, the developers seem to have been very keen to take control of the environment around them. This would need to include the precise management of the ‘street’ and a close relationship with the locals to the east, Brick Lane and beyond, to avoid potential conflicts.
The way in which they chose to do this is by developing a programme for the public space that includes events, activities, exhibitions and performances that are organised and managed by the estate management team. This has had many positive effects. The streets and plaza are lively, vibrant places; they are constantly busy and therefore feel welcoming and safe. And the strategy provides wide ranging opportunities for engagement with the surrounding communities.

In a way the recent recession has helped the cause, markets became hip and cool for the young professionals who took to spending their Sunday afternoons at Borough Market or Broadway rather than scouring the boutiques of the Brompton Road and Chelsea. The idea of being in close proximity to the Georgian terraces of Fournier Street and the curry houses of Brick Lane became fashionable.
We were told that in undertaking the management of the estate, CBRE set out to establish an extremely high quality environment that would provide a working environment that reflects the high standards of the buildings and a dynamic interaction between the buildings, the office population, the area of public space, the restaurants, homes and shops, public gardens and the local community. “The estate team aim to provide occupiers and retail tenants with an extremely efficient, safe, secure and clean environment at the best value for money”. This is a telling mission statement and is precisely what we found at Bishops Square.

Bishops Square and Crispin Place is a relatively sterile place. The architecture that forms the spaces is crisp indeed in grey steel and glass and the public space is sharply detailed in shades of grey to match. The vibrancy of the Old Spitalfields Market next to it is a marked contrast. The designed ‘streetscape’ does recognise this and the new market connects the performance space defined by the masted canopy, through the arcade of small retail outlets, into the Spitalfields Market. The boundary between the old market and the new is blurred and the whole space is busy at any time of day and animated with stalls and quirky shops of all kinds.

The history of the area is fascinating. Spitalfields takes its name from the hospital and priory, St Mary Spital that was founded in 1197. Lying in the heart of the East End, it is an area known for its Bohemian spirit and strong sense of community. It was in a field next to the priory where the market first started in the thirteenth century. The area has always been recognised for the wealth of cultures represented. Spitalfields served as a microcosm of this polyglot society, the ‘melting pot’ fusion of east and west. Historically it played host to a transient society composed primarily of new immigrants.

Evidence of the people and communities that have given the area its unique character can still be seen, the Huguenot church, a Methodist chapel, a Jewish synagogue and a Muslim mosque stand amongst traditional and new shops restaurants, markets and housing.
The Charnel House – a vault or building where human skeletal remains are stored – was built in the early 1300s as a crypt within the cemetery of St Mary Spital Priory. For more than 200 years it was the repository for bones to be relocated in consecrated ground to allow further burials in the hospital graveyard. Exposed during the development the vaults are now on display and accessible for visitors. At a later date it is known that Dickens walked through the market and it is likely that he based Fagan on a man he often saw in the area together with his boys.

It has to be said that the Estate Management Team take their task very seriously. There is a terrific events programme which celebrates the history of Spitalfields and the cultures of the Bangladeshi, Somali, banking and media communities. The events include Boishakhi Mela, the Bangladeshi New Year celebrations, which processes form Bishop Square across Commercial Street and onto Brick lane, now the second largest street festival after Notting Hill. There are dance events, concerts and films, lunchtime concerts, tea dances and tango. And for the bankers there was the Great Row, a race between finance and legal companies using rowing machines to row the 200 miles representing the perimeter of Lake Malawi to raise money for a hospital ship for the lake. Some of the Salsa and Bollywood events are proving to be too popular and have to be constrained or abandoned as victims of their own success.

Due to the fact that the investment here is predominantly in the office space with a rent roll of £37 million as compared to the retail space which generates £2 million a year, the owners can afford to be generous. They do not have to, or they do not choose to, maximise the profit from the shops or the stall holders and can consequently curate the space to be as vibrant and interesting as possible. This is then to the advantage of all the office workers and all the visitors to the area. They spend apparently, about £150,000 a year on subsidising free events. They have also installed some very good public art – Kenny Hunter’s I-Goat and Cecil Balmond’s H-Edge are both exceptional.
They are doing a lot of things right. There are incubator units for businesses and shops, they work with the universities SETsquared programme, sign up to the Council’s ‘Real Deal’ – no sweat shop products, zero emissions and green audits.

To some extent this whole venture could be seen as an exercise in taming the locals and sanitising the space to satisfy the bankers. Alternatively it could be seen as a real effort to make a contribution to the area, to make improvements to the public realm and to give back something to the local communities.

For several hundred years, Spitalfields has acted as the ‘moat’ between the City and the East End. As the city expanded its wealth through banking and finance, the East End had to endure poor investment, high unemployment and immigration allied to problems of housing and infrastructure. The decision to relocate and then redevelop the Spitalfields Fruit and Vegetable Market site changed the landscape significantly. The arrival of major City of London institutions such as Allen + Overy, ABN Amro Bank and Royal Bank of Scotland introduced some 6,000 professional staff into the area. The result has been dramatic with existing businesses receiving a much needed financial boost and new businesses setting up. One of the objectives of the developer, through its management of the spaces, was to create an interaction between the newly arrived ‘white collars’ and the indigenous locals although their attitude to the nearby Bangladeshi and Somali communities could in some ways be seen as patronising.

Have they created a ‘Great Place’? Although we may question the motives they certainly tried. So is this an example of how this might be done? Given that Bishops Square and the other public space around this development is indeed privately owned and managed there are some valuable lessons to be learnt here about the extent to which everything can or should be controlled and where the edges can be blurred.