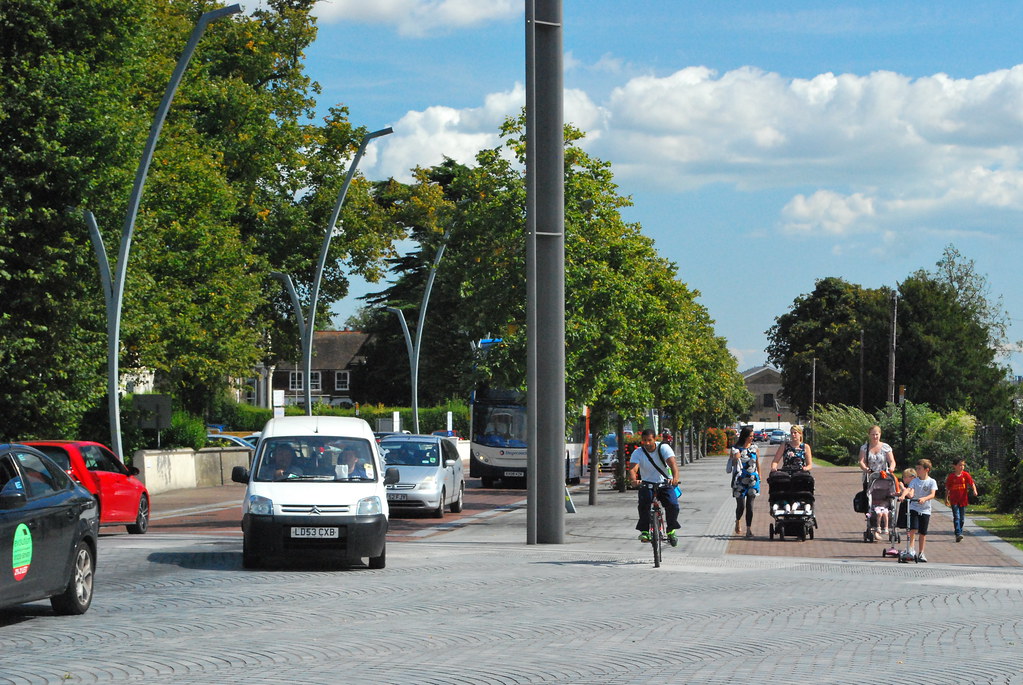 Risks can reap rewards
Successes can be had when councils are prepared to take risks and make bold decisions in urban design, not just traffic terms.

Design is only part of the end-product
Exemplary streetscapes do not always bring immediate regenerative effects.

Public Artwork to accelerate
The integral use of environmentally focused public artwork can engender rapid adoption of a project by the local community.

Two-way is a better way
Two-way streets reduce both the speed and volume of traffic.

The Government earmarked Ashford as a major future growth area in their Sustainable Communities Plan in 2003. This called for the doubling of the population over the period to 2030. Importantly the implementation of the High Speed Rail link to London, decreasing the journey time to just 38 minutes, created an opportunity for economic development of the town.

A number of ideas were explored for enlarging the town centre, leading to the conclusion that a carefully planned approach connecting the expanding centre to the new International Station would best benefit the town.

The centre was surrounded by an inner ring road which was four lanes wide in places. This significantly constrained the development of the town centre and degraded the environment. The one-way road system generated a need for numerous controlled crossings, which resulted in stop/start traffic behaviour, traffic speeding ‘to beat the lights’, noise and pollution. The ring road was used as a way to by-pass the town and it created a physical barrier to extending the town centre and its regeneration, physically represented by guard rails dividing pedestrians from the traffic.

It appears the ring road was previously used as a race track (literally) at night, by youngsters, further reducing pedestrian comfort and safety in the evenings.

The Elwick Road element to the south of the centre was planned to not only address these significant problems but also to promote development of the area, as an expanded and improved shopping offer of the town centre.

The subject of this assessment is Elwick Road, the third ‘shared-space’ scheme the Academy of Urbanism has assessed in three years. The others, Exhibition Road in Kensington and Park Lane in Poynton were equally ground-breaking in concept and robust and elegant in execution. These three exemplify a new approach to road design that cannot easily be compared with other streets that are successful in their own, rather different terms.

Elwick Road is an outstanding success in modifying driver behaviour and creating a humanized street in which the various users have shared priority. The performance of the street in reducing the traffic intrusion and making it possible for pedestrians and cyclists to integrate safely and to enjoy passing along the road, was self-evident.

The scheme has been in place for a number of years but it still reads as forward thinking and innovative.

The scheme was design and planning-led; not highway engineer led. This is a very important distinction and has clearly led to a startlingly different result. The highway finishes were designed by a landscape architect advised by highways consultants (including Hamilton-Baillie Associates). This is how city streets should be designed.

Elwick Road is very much an important feature of the regeneration process in Ashford, though that regeneration has been held back by the recession. Therefore, the street does not yet measure up in the terms Academy Assessors would normally expect to see in successful streets. Elwick Road is yet to be developed along the south side. There are plans for additional retail units and a leisure complex around Elwick Square, located about half way up the street. This will both extend the town centre shopping and also further improve pedestrian flows from the retail core. Space Syntax was commissioned to advise on the masterplan of the expanded centre.

It was encouraging that the Highway Engineer with responsibility for the project clearly understood the design intentions and fully supported the scheme and its objectives. Notwithstanding there was some evidence of maintenance backlog, but this did not diminish the clear success of this leading-edge approach.