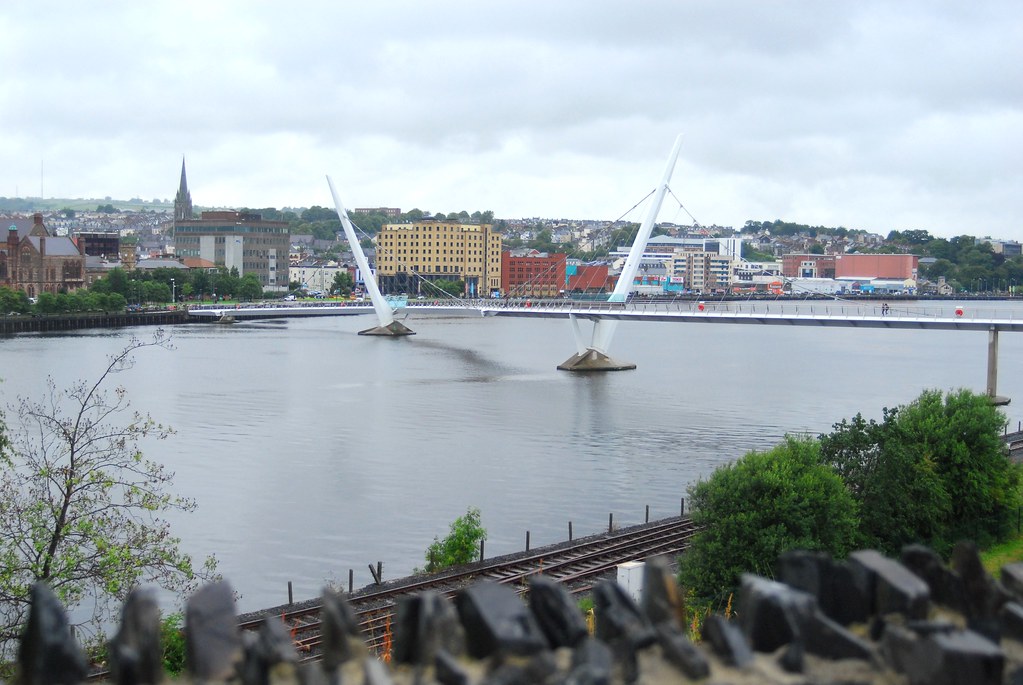 1. Bridging the cultural and physical divides
The first and most obvious lesson from this project is that a bridge, and particularly one as beautiful as this, has enormous impacts on its surroundings. The link is both physical and cultural but in this case is much more important than either.

2. Popular culture can transcend barriers
Ebrington reminds us of the significance of culture-led regeneration but in particular illustrates how popular culture can be so effective in breaking down barriers across social and generational divides.

3. Perseverance and communication are key
The most powerful lesson here is that through sensitive dialogue and long-term commitment in both time and effort it is possible for a place to reinvent itself and in this case to become a quite exceptional place.

This place in Derry ~ Londonderry, Northern Ireland, consists of two extraordinary elements, the regenerated, reimagined and repurposed Ebrington Barracks and the new bridge that links this space to the old walled city.

Ebrington is a vast space, previously a parade ground surrounded by nineteenth-century military buildings and enclosed within the defensive walls of a ‘star fort’ on the east bank of the River Foyle. This has been converted beautifully by the introduction of high-quality engineering, excellent materials, lighting and public artworks and by the preparation of the redundant buildings for occupation by new ventures, into a significant and impressive public space.

The bridge physically links the two banks of the River Foyle providing not only a valuable path for cyclists and pedestrians but also an exciting shared space. Its distinctive form, representing a human handshake across the water, joins all communities living in the city in a gesture of reconciliation and peace. The bridge deck is made up of two elegantly curved halves, each supported by an array of suspension cables from an inclined pylon. The result is of course spectacular.

Funded substantially by the European Union through its PEACE III programme, the bridge was designed by the brilliant bridge building architects Wilkinson Eyre and opened in June 2011. It has since won numerous awards for its elegant engineering but its lasting legacy is rather more important.

The bridge is the latest shared space created in a growing list that includes St. Columb’s Park and Pennyburn Play Trail as well as cultural venues such as the Nerve Centre and the Playhouse. It is heavily used by walkers, joggers, cyclists and tourists and has also, in pure practical terms, halved the walking time from the bus station (Cityside) to the Rail Station (Waterside).

The PEACE III programme has delivered job creation, urban and rural regeneration, social inclusion and cross-border co-operation. “But at its heart lies the human element of encouraging meaningful contact between the two main communities and the commitment to tackling sectarianism, racism and stereotyping by building relationships and fostering dialogue” – Pat Colgan, Chief Executive, SEUPB.

The other element that makes up this unique place is the new public space that the bridge connects with. For over 160 years, Ebrington Barracks was a massive British military complex in the Waterside area of Derry ~ Londonderry which was effectively hidden from the rest of the city behind fortifications and barriers. It has now been reinvented as a major cross-community public facility which played a major role in the City of Culture programme of 2013 and continues to find a wide range of uses for the city and the region.

The new public space is linked to Derry ~ Londonderry’s Guildhall Square and the walled city by the Peace Bridge. The former parade ground area forms a vast central space for outdoor performances with smaller spaces for other events. Opened in 1841 as a walled ‘star fort’, Ebrington continued as a military base through two world wars and through the ‘troubles’ until 2003 when it closed and was given to the public and placed under the management of the local regeneration company ILEX.

Given its associations with the British past, a site like this has strong potential to divide communities. Yet the regeneration process has succeeded in making it a place with strong cross-cultural potential which has already been demonstrated. During the celebrations of Derry ~ Londonderry as the first UK City of Culture, the site hosted what might arguably be called a ‘cross-cultural tattoo’ as well as a BBC concert and the Turner Prize. In this way, the cultural significance of the ‘place’ began to be neutralised, modified and reshaped.

ILEX continues to hold responsibility for securing the economic, physical and social regeneration of Ebrington. Working in close partnership with the city council, this includes the facilitation and promotion of a wide range of events from rock concerts to graffiti festivals, choral events and skateboarding championships. But it is also focused on the physical regeneration of the built environment and the encouragement of new investment and business ventures into the area.

The repopulation of the still largely empty properties around Ebrington Square is just beginning. There is a wonderful micro-brewery and associated bar/restaurant and rumours of a boutique hotel. Infrastructure is being installed around the site to deliver employment opportunities and residential development. This project is well on its way. The whole venture has been fraught with difficulties embedded in the historic animosities. One particularly moving anecdote is relevant here. As part of the quest to become City of Culture, a local arts centre produced a film entitled ‘Voices’ which captures tensions and divisions within the city but also its vibrancy and enthusiasms for new intercultural dialogues which would override past segregation. In the film, two middle-aged locals highlight the double name of the city with ‘I am Derry’, ‘I am London-derry’. Following this, a young teenage skater jokes ‘I am LegenDerry. During 2013 the ‘LegenDerry’ moniker gained huge traction and was adopted by many elements of the town and now locals can enjoy a coffee in the LegenDerry Warehouse Café in the city’s main square.

Ebrington and the Peace Bridge, together perhaps with the Embankment and Shipquay Place at the Guildhall, have produced a great place, thoughtfully conceived, elegantly realised and enormously important to the people of LegenDerry and for the region.

It is extremely difficult to capture, in a few paragraphs, the complexity and significance of this place but this example of the pursuit of neutrality in place-making is hugely significant and relevant elsewhere.