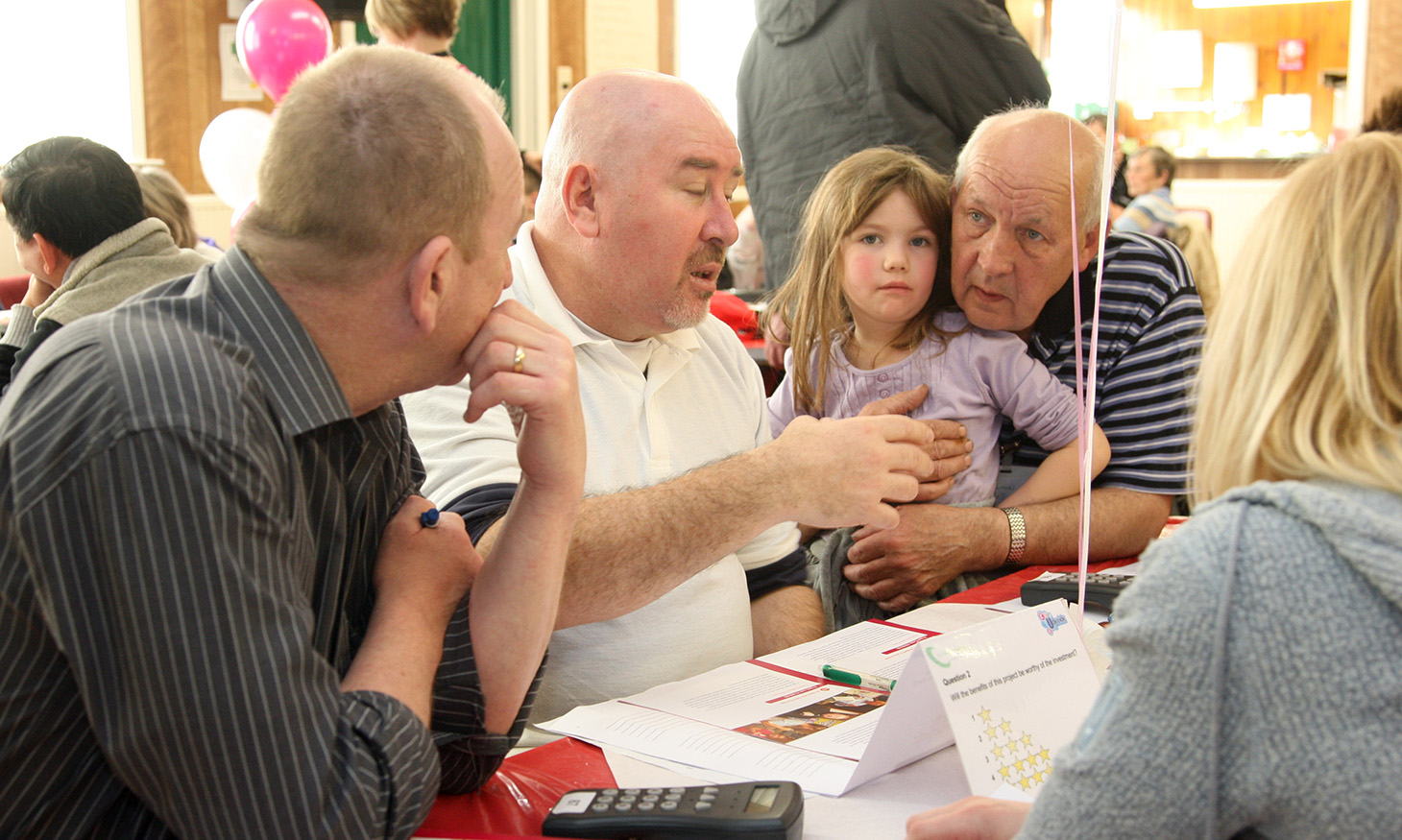 Handing over to the local community decision-making on how to spend public money may seem at first sight politically daring. Young Urbanist Katy Hawkins speaks to three leading practitioners of participatory budgeting to explore how this increasingly popular process may lead to more civic engagement and greater democracy.

Participatory Budgeting was conceptualised in Porto Alegre in Brazil 1989 and has since swept across Latin America and beyond. Whilst the rules of engagement and the design of the participatory budgeting process varies from place to place, it follows a common structure. A proportion of a national or local budget is allocated to the participatory budget and citizens, with the help of relevant experts, are then invited to pitch proposals for initiatives considered beneficial to the wider community – such as functional repair work or socially-minded outreach activities. The community is then invited to vote online or in person, and those ideas that secure the most votes are added to the cycle of implementation.

Increasing in popularity internationally, today there are over 1,500 participatory budgets around the world including significant slices of expenditure in some large cities. The newly elected mayor of Paris, Anne Hidalgo, has allocated the largest sum of public money in Europe for a participatory budgeting process – €426m between 2015 and 2020, about 5% of the city’s investment budget. New York City, a long-time advocate of participatory budgeting, has furthered its reach to include public housing, enabling residents to vote on how funds should be spent to improve their homes and communities. Today, Poland is one of the newest countries to hype over the initiative.

So, why has it become so popular? For those sceptical of participating in civic processes, participatory budgeting claims ‘real power over real money’. It produces tangible outcomes and results structured around relatively short timelines. It is an embodiment of direct, deliberative democracy.

In English public policy, participatory budgeting exists as an arm of the sometimes impenetrable Localism Act (2011), emanating with it ideas of the Big Society. Here, it is formalised into a comprehensive structure, relatively void of technical language, making clear the role that both participating citizens and municipalities play. It is a structure based on mutuality, where the two parties can meet in the middle and in which both stand to gain.

Moreover, the process has reportedly worked to increase transparency and accountability in terms of public spending by the local governing bodies involved, thus increasing citizens’ understanding and trust. While participatory budgeting is used in England – in Newcastle, Durham and Tower Hamlets, to cite but a few examples – it is often on a relatively small scale. Although Hazel Blears, secretary of state for Communities and Local Government from 2007 to 2009, was a core supporter, it never quite took off as the then Labour government had intended. Following a decline during the austerity of the last few years it is again rising up the agenda, particularly in Scotland where it has become linked to a wider devolution of powers to citizens. Until 2012, The PB Unit was the lead agency working for the UK government, but today this work is being taken forward by PB Network, an independent body advocating learning and innovation in the field.

Jez Hall, who helps co-ordinate the PB Network, spoke of how he was led to participatory budgeting on a learning visit to Porto Alegre. Hall describes how he was inspired by the passion, energy and coherence of the participatory budgeting process. “Knowledge that existed in communities and which was locked up in the town hall – whether [it was held by] those with design skills or elected politicians – was able to amalgamate. A truly co-designed deliberative space, so different from tokenistic consultations in the UK,” says Hall. 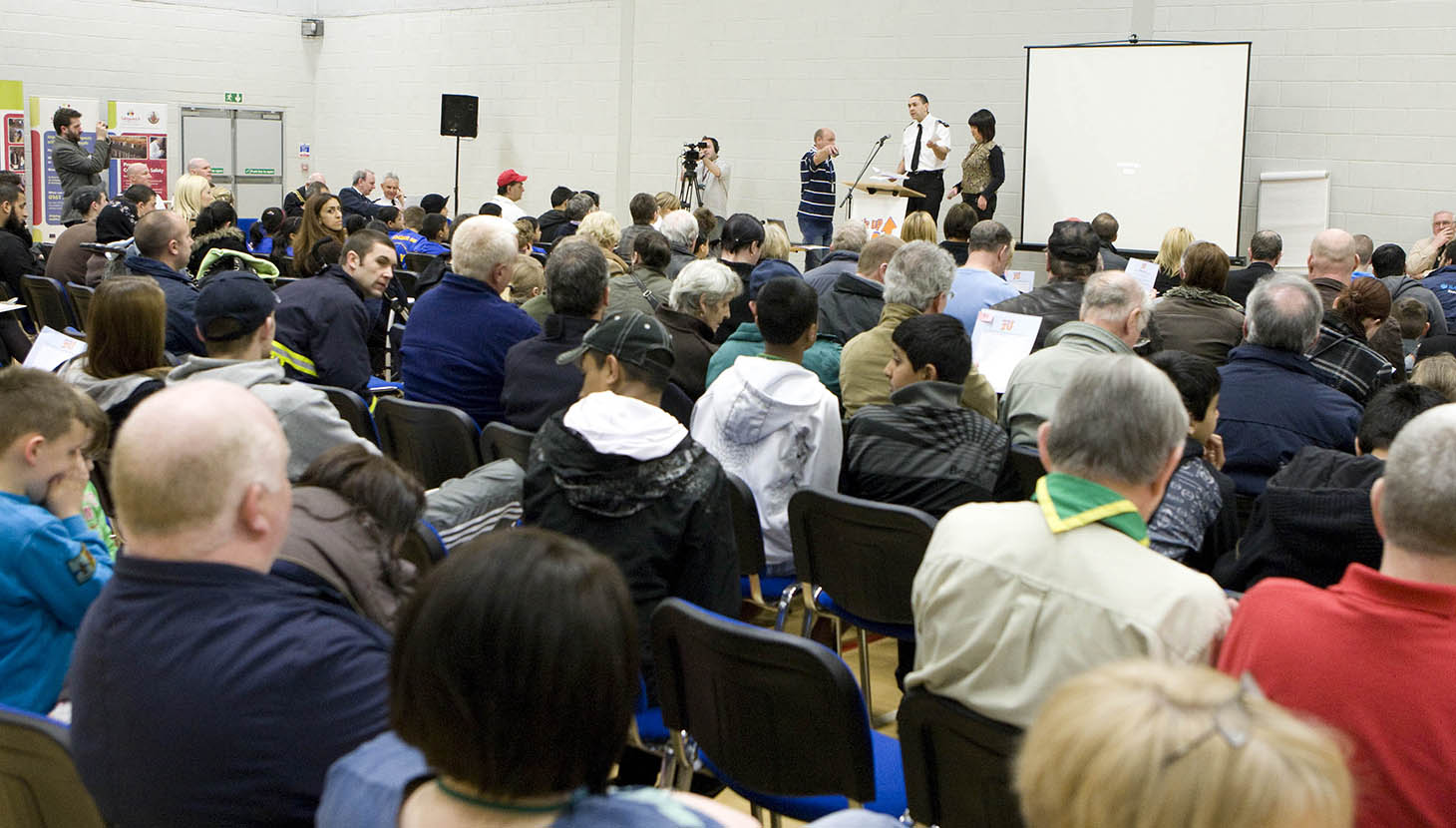 He goes on to argue that: “The UK is one of the most centralised democracies in the world, which sees communities relegated to argue from a deficit position. Participatory budgeting usurps this and allows for innovation to pop up in an unexpected way.” Known sometimes as a ‘Community X-Factor’ or ‘Citizens’ Dragons’ Den’, Hall refers to it as an asset, not deficit-based model. The traditional UK format for participatory budgeting asks that participants give a three-minute pitch of their idea in front of a community audience, who then vote for the ideas they like. This, he says, acts as a positive space for the community to exhibit itself and achieves a near reversal of the archetypal community meeting set-up, which can often feel reactionary.

Furthermore, Hall describes how the very act of a community congregating together in a common space, in which they are made to listen to one another’s proposals and enter into a dialogue, works to build consensus and social capital by way of increasing understanding and in triggering unplanned collaborations. And it’s not just fellow citizens that attendees begin to understand more about. “One of the most common responses from the participating community is ‘I never understood how hard it was to make these decisions,’” says Hall. Thus the meetings act as a form of perspective-taking, whereby citizens are made privy to the often- difficult choices and constraints faced by government. Being a part of the process works to close the gap in understanding between the ‘hard to reach’ politician or council officer, who talks in technical bureaucratic language, and the ‘hard to reach’ community member, with their own more pressing, day-to-day concerns.

However, concerns are often voiced about the competitive structure of the initiative, which many fear could be at risk of becoming something of a popularity contest based on the profile of the individual and the skill of the pitch. Jez Hall remains confident in the process. “Whilst people might come into a meeting with the intention of voting for their friends, the very act of listening unravels this intention,” says Hall.

What can we learn from elsewhere?

Maria Hadden, head of the Chicago division of The Participatory Budgeting Project (PBP), praises the inclusive nature of the process. “Participatory budgeting enables those who cannot participate in regular elections because of barriers like age or legal status to exercise a key component of our civic culture by making informed decisions to improve their communities,” says Hadden, whose non-profit organisation supports advocacy for, and implementation of, participatory budgeting in North America.

So, what are the solutions for dealing with lacklustre attitudes towards democracy? For Josh Lerner, chief executive at PB Project, it is turning these processes into something of a game, which he highlights in his new book, Making Democracy Fun. In the book he advocates clear structures and rules when designing democratic approaches to public participation, including competition, collaboration and measurable progress – qualities all belonging to a successful participatory budgeting process. In this vein, Hadden continues: “PB makes engagement real and easy with clear expectations and paths to participation.” In short, it takes a form that’s accessible and inclusive in nature, thus quashing the idea that it is only the educated, ‘usual suspects’ who can, and will, engage in such a process. Moreover, she continues: “There’s an honesty to the process that people sense that draws them in, and the focus on local dollars and local improvements keep them coming back.” 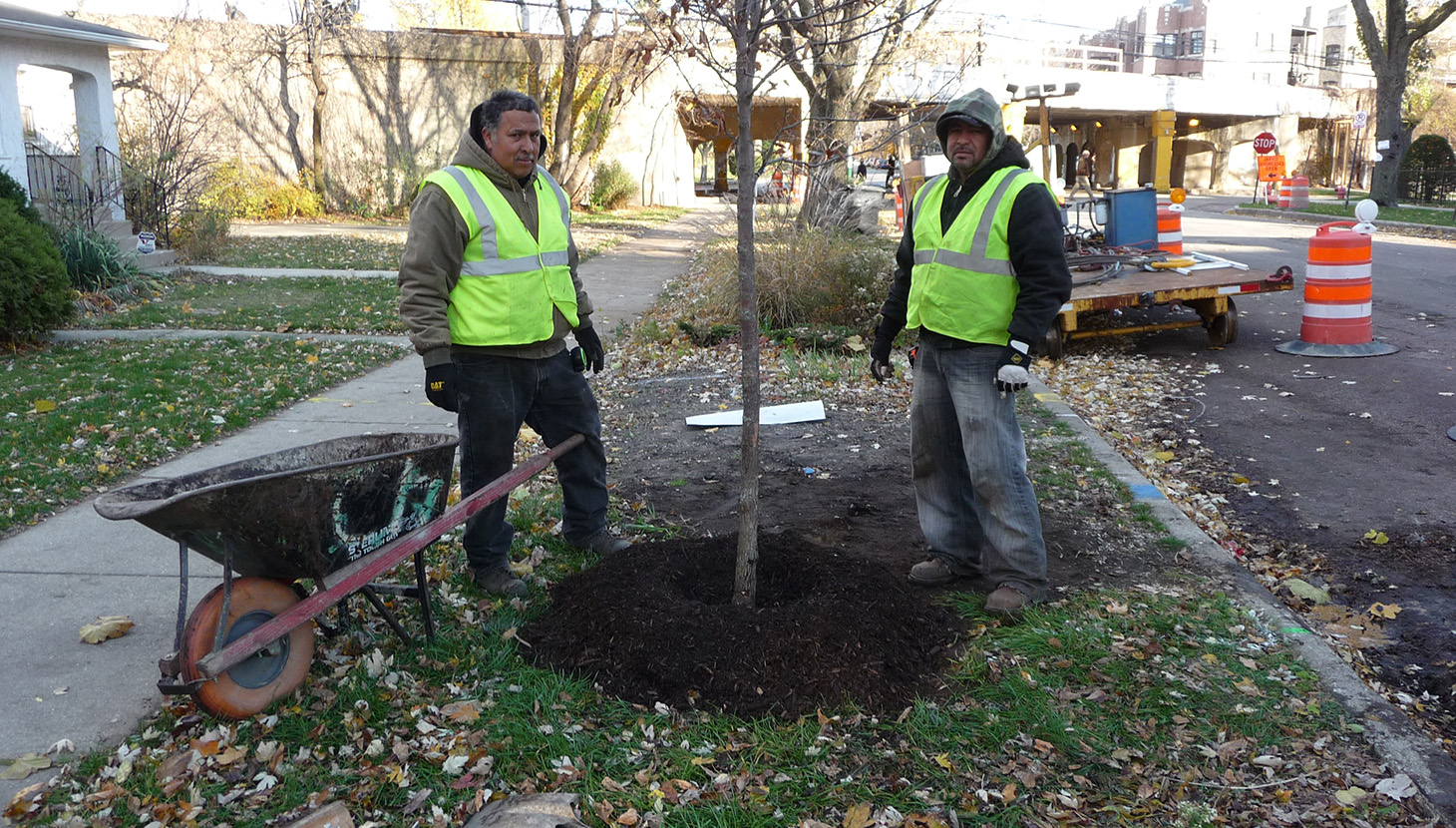 International expert-in-the-field Giovanni Allegretti sees participatory budgeting from two positions. Allegretti has spent the last 20 years as an international researcher on participatory budgeting and he currently continues this work in Portugal. He is also the appointed co-chair of promotion and participation to the Regional Parliament of Tuscany. For Allegretti, the process is “a learning by doing space” whereby the practical outputs are secondary to the process itself – a form of “civic pedagogy and solidarity pedagogy.”

Reflecting on the ‘popularity contest’ fear raised by Hall, Allegretti cites anti-corruption activist Karel Janeček, whose work on alternative voting system Democracy 2.1 has informed many participatory budgeting processes. Working with algorithms, Janeček looked at how people’s preferences change when they are confronted with a multiple-choice vote. When this theory is applied to participatory budgeting, people are required to vote on more than one topic or project and, consequently, look further than their own vested interests. Janeček’s studies have shown that whilst the first vote might be motivated by personal gain, the second will force individuals to read up on the other proposals, seeing that they get to learn about both previously unknown areas of their community and the infrastructural and social needs of the people that dwell within.

Elaborating on this idea of civic education, what about those projects which are not deemed eligible? Allegretti explains that Portuguese municipalities have set up a dialogue stream between their technical staff and the individuals behind the projects so they can work together to make them viable. This enables a hands-on opportunity to learn about the constraints faced by municipalities, adding yet another learning space and another dimension to this notion of ‘perspective taking’. This also seeks to address and manage the potential sense of alienation for those whose proposals have been rejected.

Despite all the reported successes, the process is not without its problems. In recent years, Porto Alegre municipalities have reportedly started to withdraw their support for some projects, leading to stagnation. Allegretti suggests these less successful case studies provide highly productive learning experiences, as long as processes are critically reviewed. However, he cautioned that municipalities often lack the resources to do so: “Unless they are supported by a university researcher, the municipalities end up not knowing the feelings of the citizens so they repeat the same mistakes from year to year and they lose participants.” In order to improve on the participatory process, he is looking to technology. He suggests that collating digital data on the voters through phone applications would mean municipalities could first analyse, and then extend their reach.

Moreover, Allegretti suggests that there should be greater integration between participatory budgeting and urban planning. The risk with participatory budgeting as a standalone initiative, he says, is that it is based on a ‘geometry of alliance’, whereby people come together on a specific, fragmented topic, without thinking holistically. “Planning is very frustrating for people – they lose confidence in plans as they’re very bureaucratic and take a long time to be approved. When they arrive they are already outdated,” says Allegretti. Conclusively, he suggests combining the two, allowing them to strengthen one another, with ‘planning’ working to frame the decisions made, and participatory budgeting acting as a short-term, accessible and participatory, counterpart to long-term planning processes.

All these case studies and varied perspectives, derived from quite different contexts, provide valuable learning. Participatory budgeting can, it seems, provide an accessible, inclusive and enjoyable entrance point into participatory and democratic civic processes. It is a process that bears the potential to see a rejuvenation of the face of democracy. But whether the government and, more importantly, our communities choose to embrace this radical new way of deciding the future of our cities, remains to be seen.

You can find out more about how participatory budgeting is being applied in the UK and how you can get involved here: pbnetwork.org.uk

Katy Hawkins completed an MRes in Interdisciplinary Urban design at the Bartlett last year focused on community engagement processes, she and now works for Mapify and something good something useful alongside her role as Communications and Events Executive at The Academy of Urbanism. She writes for a number of hyperlocal press publications on community engagement processes and is an active member on the committee of her Tenants and Residents Association (Pelican Plus) and co-curates creative workshops on the estate.