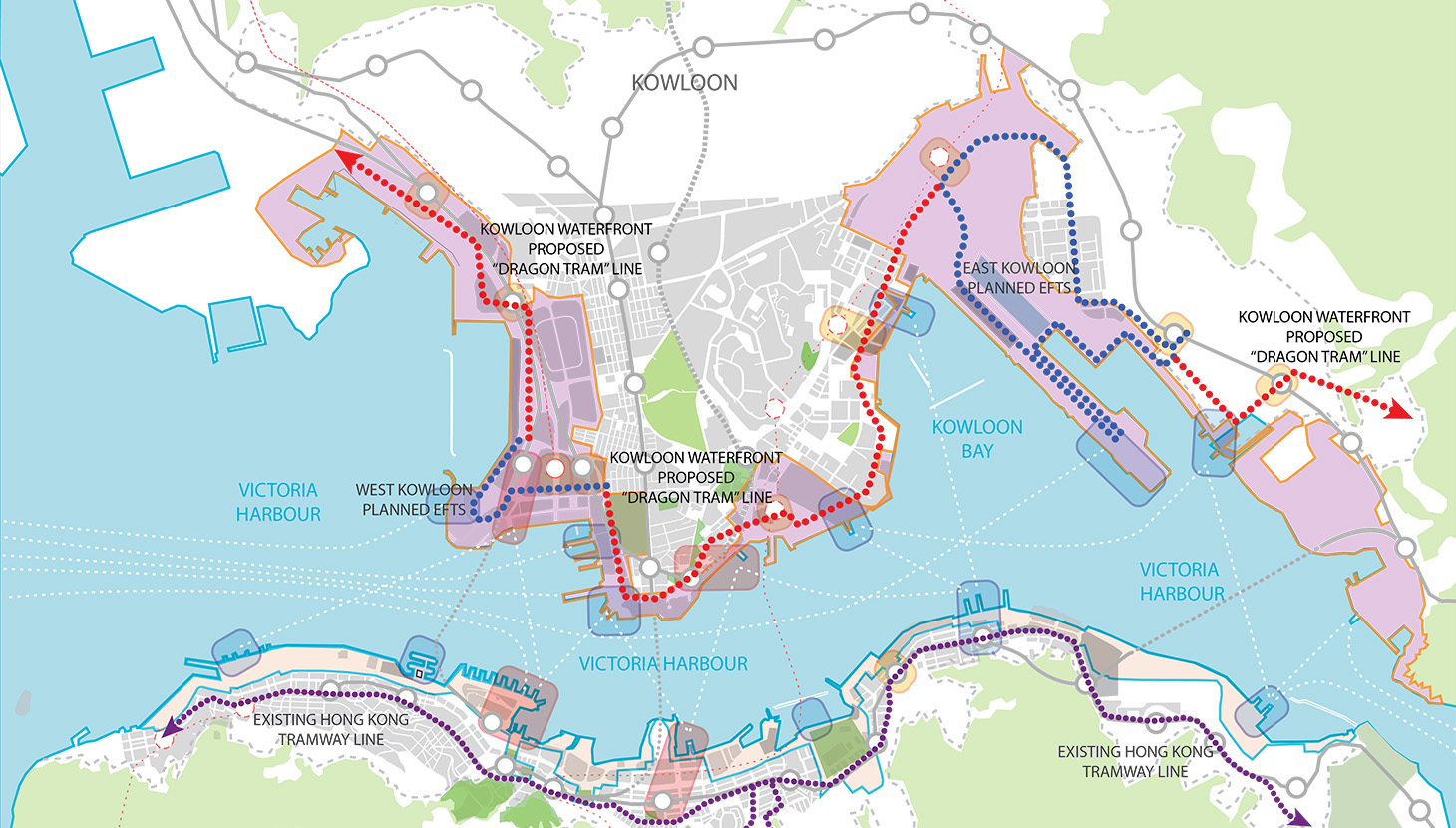 The Dragon Tram strategic vision for Hong Kong shows how one of the city’s historical icons – the tramway or ‘Ding Ding’ – could be a catalyst for change leading to the remodelling of the harbour edge at Kowloon.

It is 2020. Hong Kong’s future looks brighter than ever. A revitalised and accessible waterfront on Victoria Harbour, a diversified economy, a vibrant tourism sector and a healthy urban fabric have made it one of the most liveable cities in the world. High density finally rhymes with sustainability.

Whether riding a modern tramway or biking to work on the longest waterfront promenade in the world, residents of Hong Kong now enjoy amazing views of Victoria Harbour. Tourists flock to the city to tour the dramatic urban landscape and constant waterfront activities. People of all ages can navigate the city easily. Local environmental agencies and universities have teamed up to create a research institute that studies the benefits of ‘at-grade’ (on the surface, without any change of level) public transport on the resilience of ageing waterfront cities. That is why now in 2020 Hong Kong is seen as a global example of what can be achieved when city design and public transport functions work together to create a truly sustainable lifestyle.

Before this can all come to fruition, one of the densest cities in the world must face a series of harsh realities. Today, although 90% of residents use public transport, the current system is fragmented and inefficient being in the hands of multiple private operators. Private interests and profit making come at the expense of a holistic user-oriented public transport strategy for the city. 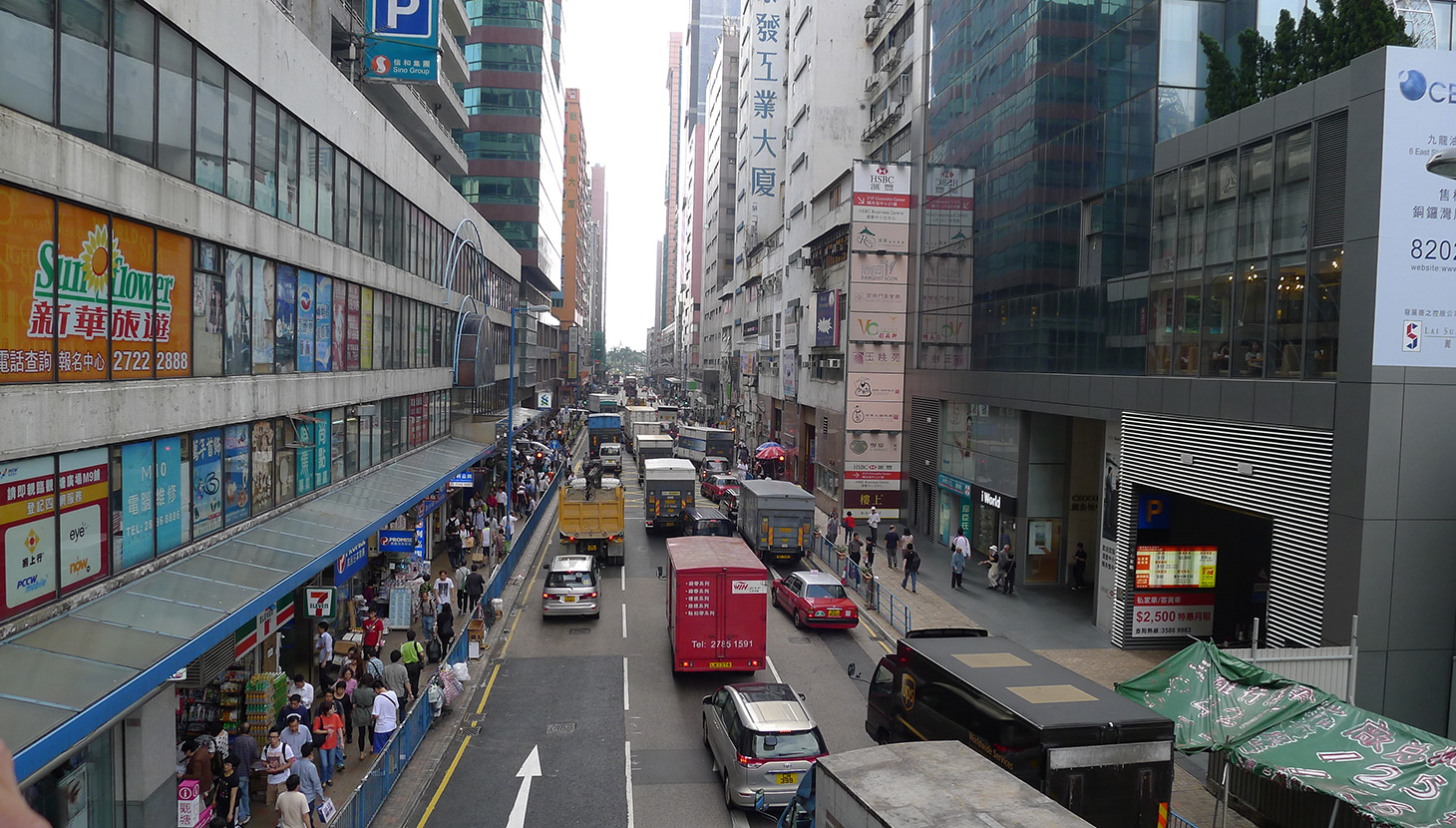 The Mass Transit Railway Corporation (MTRC) is first and foremost a property developer extending its network where new properties can be developed rather than connecting residents of existing areas conveniently to their place of work or leisure. Bus and mini-bus companies lobby heavily against reducing the number of lines serviced running through congested central areas, even though they are under-used and cause major gridlocks at all hours. They also firmly oppose the removal of large bus termini occupying vast tracts of land at ground level in core urban areas.These sites could otherwise be better used as public spaces or for more active uses in more vibrant streets. Besides, private car ownership has also increased dramatically these past five years due to the influx of wealthy Mainland Chinese residents able to afford chauffeurs and reluctant to use the overcrowded MTR, causing ever increasing traffic congestion and raising concerns over worsening air pollution conditions.

Today, Hong Kong is still relying on outdated planning frameworks approved in the late 90s. It is only a matter of time before international ranking of city liveability and competitiveness, which put Hong Kong among the top five, start reflecting these shortcomings. 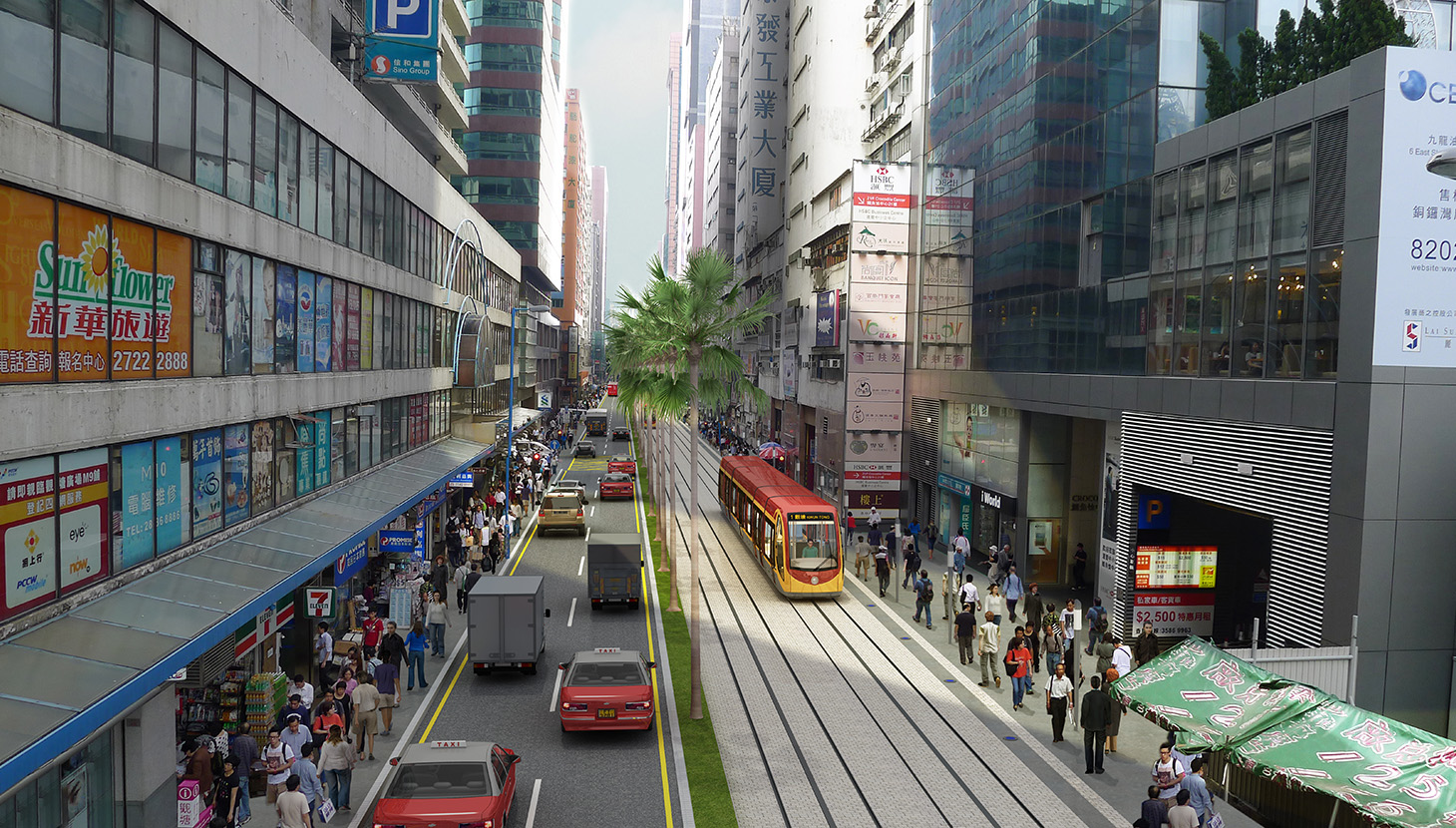 Connecting the dots –revealing opportunities through big picture thinking
Interest groups have long advocated that Hong Kong provide its residents and visitors with a world-class waterfront promenade on both sides of Victoria harbour. Twenty- two action areas have been defined where improvements to accessibility and provision of recreational uses should be implemented. However, no coherent framework gives consistency to those isolated projects. The lack of vision and planning co- ordination for the harbour front has long been blamed on the absence of a Harbour Authority, whose establishment is still under discussion and scrutiny to this day.

Meanwhile,West Kowloon and East Kowloon, the two largest remaining development sites on Kowloon peninsula have seen new planning frameworks approved, which include an at-grade reserve for an Environmentally Friendly Transport System (EFTS).This convergence of aspirations is an opportunity to connect the planned EFTS line in the East to the one in the West along the waterfront.The new tramway line would generate a coherent framework for all 22 Victoria Harbour ‘Action Areas’, enabling better access to recreational uses and water activities and encouraging greener ways of moving around the city such as cycling and walking.

Starting a conversation on stewardship –city-making take over: If stewardship is the careful and responsible supervising and management of something entrusted to one’s care, the Hong Kong model of City stewardship is all about outsourcing city management through the allocation of very specific and localised projects to private consultants through different government departments working in isolation from one another. For economic reasons, public-private partnerships or private enterprises running public projects have been the norm.This has resulted in a lack of co-ordination and synergy at city level and has deeply affected the way public transport services are planned and managed.

The self-initiated vision for an urban modern tramway along the entire Kowloon Peninsula Waterfront by MUDstudios has since attracted the interest of local tramway operator Hong Kong Tramway – Veolia (HKT). HKT has therefore commissioned MUDstudios to look at a first stage of the vision: the Kai Tak and Kwun Tong area. MUDstudios’ work aims to help the community better understand and visualise the benefits that an at-grade modern tramway would represent for the area and its residents.

The study for a modern tramway at Kai Tak was presented to the Kai Tak Public Engagement forums in December 2013 and has received positive coverage in the press (the presentations were made in the form of a video in English [https://vimeo. com/81165343] and Chinese [https:// vimeo.com/81165342]).

HKT continue their efforts to promote the sustainable vision to government departments and stakeholders.Through fostering public interest and a dialogue with the private sector, MUDstudios seeks to gather support from the community and decision makers in government to build momentum towards implementing this holistic urban vision.

A common thread for regeneration – quicker, lighter, cheaper with a vision
In this context, the Dragon Tram vision for a modern tramway along the northern edge of Victoria Harbour is more than just a transport project. It offers the opportunity
to use the infrastructure works necessary to implement the transport function as a catalyst for quicker, lighter and cheaper regeneration projects to achieve the final vision for a continuous, vibrant, accessible and green harbour front.Working within a strong and flexible framework as opposed to a fixed masterplan allows targeted projects to better respond to current needs, or easily adjust to shifting priorities and aspirations.

A holistic transpor t system –towards an integrated user-oriented network:
An at-grade tramway along the harbour would facilitate and encourage the usage of all public transport rather than compete for ridership with other modes of public transport. It would allow better integration with water transportation such as ferries and water taxis, other surface transport modes such as buses, mini-buses and bicycles and of course the MTR. Smaller and smoother interchange nodes would release large areas currently used by bus termini.The proposal suggests that bus termini be moved to the periphery to release land for public service and economic uses in the dense core areas.Those peripheral transport interchange nodes would then include park and ride facilities and allow better synergy and complementarity between the different modes of transport.

“This vision is neither limited in scope nor modest in its ambitions. However, the economic, social and environmental challenges Hong Kong faces today are no less daunting”

Ultimately, the strategic vision aims to help the city reconnect with its heritage. It proposes a green alternative to car dominance, reshaping a more efficient and diversified public transport system, offering accessible at-grade transportation to an increasingly ageing population and finally, acting as a common thread and a catalyst to rethink and regenerate its waterfront for recreational and 21st century economic activities.

Through a bold reconfiguration of the urban and landscape fabric, it sets a new benchmark in terms of urban liveability while fostering a sustainable economic model. But above all, by looking at the bigger picture and claiming stewardship of the city by its residents and users, the proposal reveals the opportunities offered by the existing planning framework. It creates a common thread for smaller regeneration projects, rationalises the transport network into a user-friendly system and explores ways of using public transport infrastructure to make Hong Kong more efficient and liveable.

Together, these principles provide a unique roadmap for Hong Kong’s future.This vision is neither limited in scope nor modest in its ambitions. However, the economic, social and environmental challenges Hong Kong faces today are no less daunting.The Dragon Tram proposal sets out a bold framework for the type of change that will position Hong Kong for the future it deserves.

Laura Mazzeo is a Young Urbanist

and founder of MUDstudios, an urban design studio in Hong Kong which has developed the Dragon Tram Strategic Vision.