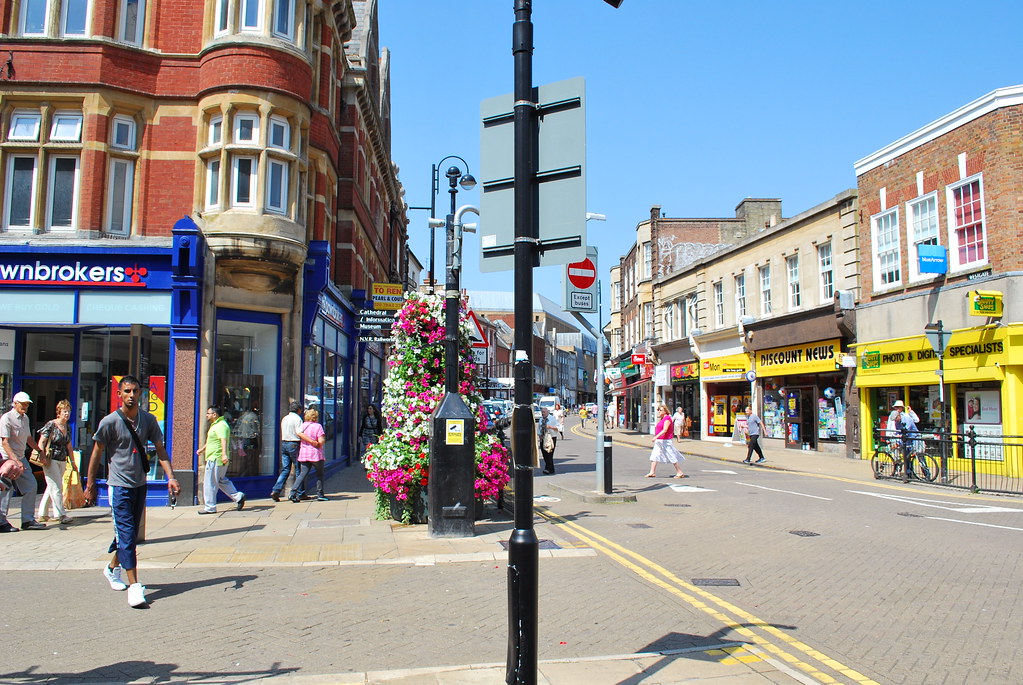 The rare and bold decision to erase the mistake of an earlier decade was if not unique, a very unusual catalytic ‘move’ in the regeneration ‘game’. To persuade a council and a population that destroying a key building within a major public space took a strong vision and convincing argument.

Cathedral Square is very large so the movement and focus provided by the fountains is space-filling and a place making attraction. Fountains are expensive to maintain but their impact here is appreciated by all and supported by retailers.

3. An agreed plan to create a fresh public space

Once articulated and shared, the vision was pursued tenaciously. With the persistence and vision of two individuals, backed by a keen council member, Cathedral Square was able to realize its potential through regeneration and growth.

After the square was complete and its attractiveness manifest, then retail demand dramatically and demonstrably increased. Major chains have moved in and have added to the variety and liveliness in the square.

This project is most remarkable for the tenacity with which its ambitions were pursued. The opportunity and desire to develop Peterborough’s Cathedral Square was identified in a public realm strategy back in 2008. It involved rethinking the east-to-west ‘Stone Axis’ described by Gordon Cullen over thirty tears ago. There were, however, a number of not insignificant obstacles to realising the project.

The idea behind the scheme was to create an open space which would “refocus the city centre back to its heart”. The stated intention was that it should act as a major catalyst to economic regeneration, attract inward investment and provoke a real sense of pride in the inhabitants of Peterborough. In this intent, perhaps, the project is not unusual. The barriers to achieving it however were considerable.

To create the environment in which a good public space could be generated needed the careful development of relationships with a huge range of interested parties. There were the technical issues to overcome, such as the utilities and services close to the surface and the relocation of major infrastructure all carrying associated costs. There was extensive archaeology, medieval road surfaces and remains of civic buildings within the church boundary walls. But most significantly there was a building in the way.

The very unattractive Norwich Union Building unsympathetically plonked next to the church in 1970s had to be acquired, at the cost of three million pounds, and then demolished to create a public space. It must have been a difficult task to persuade members and officers of the council to purchase an asset of this value and then to knock it down. But this is what they did.

It seems that this was predominantly the achievement of two determined individuals, an experienced and talented local landscape architect and a visionary member of the city executive charged with achieving growth and regeneration. They successfully argued the case for the transformational value of well designed, inclusive space in changing people’s perceptions, increasing footfall, raising rents and acting as a catalyst for change. They were of course supported by an entrepreneurial leader of the council who shared the vision.

The result is a very good public space, well considered and well detailed in high quality materials. What has been created is an elegant, pedestrian-focused setting for some fine historic buildings including the Cathedral Gatehouse, the Guildhall, and St. John’s Church. The square has no road kerbs and is formed with a wall to wall stone mat with well integrated water jets adding a dynamic element to the composition.

It seems to be fulfilling its role insofar as the space has become hugely popular – it was certainly busy on a sunny day in July, bringing with it a boost to surrounding retailers and market stalls under the trees. Now the major chains have decided to invest, surely a sign of success (perhaps) which adds to the liveliness and use of the space. As important, the scheme has been a catalyst to bring the church into use for everything from business meetings to recitals.

Those who proudly presented the scheme to us were very clear about the lessons to be learnt from the process: the value of communication in building support and managing expectations, and the power of a minority, in this case perhaps twenty people out of a population of 176,000, when driven by a ‘righteous determination’. They were clear about the objectives and they celebrated success at every opportunity.

The result is a very fine square in the European tradition that links the Cathedral with the ‘heart of the city’ and has, as far as we could tell, changed the perception of Peterborough, transformed local business and generated a popular public space as intended.