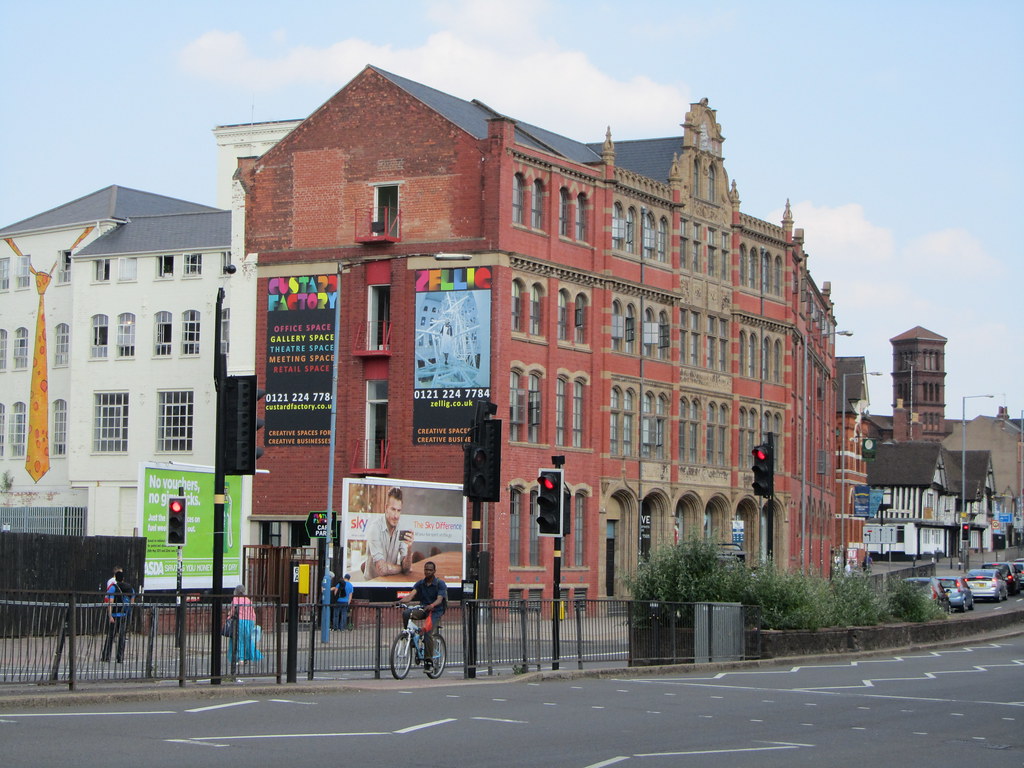 1. Factory district as alternative to CBD

Much more than a single building as the name implies, the Custard Factory is a huge city quarter slowly but surely defining an alternative to the conventional city business district.

Empathetic management has nurtured emerging businesses and offered space to expand. From the outset, the Custard Factory has operated under a different model of landlord-tenant relationship based on flexibility and trust between the parties.

The non-corporate style suits many new start ups, particularly the digital media based start-ups and young businesses, and this anti-corporate style has generated an extraordinarily democratic and inclusive space with a strong sense of community.

The estate is huge so the plan has unfolded gradually as market interest has been created. The development has a number of new interventions, but also many buildings without a use yet. This slow, organic regeneration has given the Custard Factory a unique sense of place.

The Custard Factory was first developed by an entrepreneur with a background in the antiques business. This may have been informative in recognising the value of old, often discarded and unloved objects. Lucan Grey who now owns and runs the Custard Factory also brought to the project the skills and attitudes of a ‘trader’.

The development of some fifteen acres of converted industrial buildings, interspersed with relatively new interventions and scattered with sheds and factories yet to find a new use, delivers a powerful sense of place. It is an identifiable ‘quarter’ with an undeniable character and identity. There is a kind of laid back atmosphere and the sense of freedom that has been engendered here is almost tangible.

It seemed somewhat quiet when we visited at four o’clock on a Wednesday afternoon. As is so often the case in this sort of environment, the majority of uses are hidden and the associated social life yet to emerge. Unfortunately we couldn’t stay long enough to see if a vibrant social scene exists in the early evening as the young technopreneurs emerge, blinking into the light, from their studios. But there was plenty of evidence that the two thousand tenants and the many more drawn to the surrounding area to set up their businesses form a lively community.

It seems that about twenty three years ago this part of Digbeth was doing ‘grunge regeneration’ before anywhere else outside London. The developers had perhaps learnt from the precedents of Clerkenwell and Shoreditch and brought that experience to Birmingham. They have recognised the desire and the need for the anti-corporate environment much loved by the digital media based start-ups and associated young businesses and generated an extraordinarily democratic and inclusive space.

There is a sense of trust here, between the owner, developer and the tenants, which comes from the way in which business is done. In the beginning, in 1990, space was let for £2-3 per square foot, including a management charge to bring people in to populate the site. Space in a semi derelict building was given away for free on a handshake. Short agreements allowing new business to get of the ground without worrying about long leases and contractual commitments rapidly attracted the first five hundred tenants.

There was and still remains the idea of transaction and of mutual obligation which seeps through the whole enterprise and generates a sense of community. The developer has played a long game based on a ‘different set of values’ which is now beginning to repay the investment of time and patience. In this way it is an important example of slow, organic, regeneration as opposed to the comprehensive redevelopment based on master plans.

What is to be admired here is the longevity of this project and the way in which it has now established an identity with which others such as the educational institutions want to be associated.