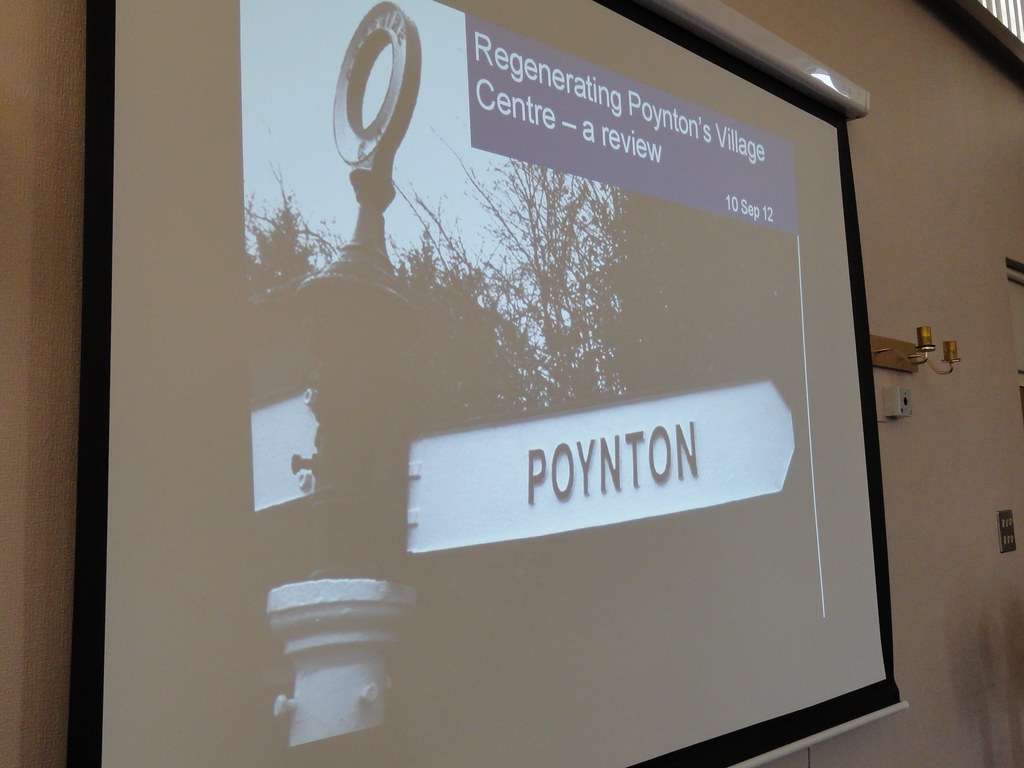 Poynton is very clear that it is the objective of reviving the local economy that has driven this project and not traffic-calming per se. It illustrates how being clear about objectives ensures the right scheme for the place and helps avoid inappropriate, off-the-peg solutions. It is a successful piece of place-making where the highways intervention has directly led to the improvement and regeneration of the village centre.

2. Innovation delivered in a small town

The scale of the place means this is a small town scheme, which has been driven by a local group. There is perhaps a preconception that innovative schemes of this type and scale can only be achieved in neighbourhoods of large cities, where there is the profile and scale of public sector support and expertise available centrally. The value here is that there are so many ordinary towns and villages similar to Poynton that could be transformed in this way to become interesting and vibrant places once more.

The realisation of this project to a large part is due to the tenacity of a prominent risk-taking local politician supported by a strong consultant team.

A ‘shared space’ approach to street design has delivered an evident reduction in average traffic speed to below 20mph (through design) despite a 30mph limit remaining in place. The use of gateways and quality materials all reinforce visual messages that drivers are entering a special and different space.

Partners have monitored and evaluated relevant impacts including accident levels, air pollution and shop voids. Monitoring provides before and after evidence of change. A professional film communicates the story in an easy to understand way which includes community vox pops.

It is interesting that this project has been included in the ‘streets’ category. The primary intention of its proponents was regeneration of a suburban village centre that now has a strong sense of place directly generated by the intervention of a most daring ‘naked-streets’ highways project. The street design is therefore the key to a very interesting piece of place-making where the highways intervention has directly lead to the improvement and regeneration of the village centre.

The scheme concerns the intersection of two ‘A’ roads in awkward juxtaposition, that previously necessitated a complex sequence of traffic lights, pedestrian crossings and the usual barriers, signage and street clutter that goes with such a challenging junction. This was transformed into Park Lane, a suburban shopping street with a high percentage of independent shops and café/restaurants. The intervention does away with almost all signage save for an artist-designed ‘gateway’ on each approach bearing the clear message, “Shared-Space Village – Give way to all”.

There is ample evidence that the regeneration process has been started; clearly demonstrated by the renewed vitality of these shopping streets, supported by the extraordinarily good behaviour of the traffic.
As we have come to expect with such an audacious scheme the project was championed by a dedicated local elected member, county ward and town councillor Howard Murray, supported by a strong consultant team. There was initial objection by a vociferous local minority and specific interest groups such as traders and disabled people – perhaps not surprisingly, given the scheme is so innovative; people had no comparators against which to measure it. However, these objections have been largely addressed, although the request of guide dog users for signals was put aside, and there now appears to be wide acceptance that the changes have made a significant difference for the better.

The streetworks project has removed all traffic lights and controlled pedestrian crossings and barriers. It has been designed using high quality materials throughout and appears to be generally robust, though some lessons have been learned in certain areas of detailing. The £4m budget that included £1m for the replacement of a collapsed sewer under the main junction, has to be considered against the planned maintenance that was overdue to the previous roads and the long-term maintenance cost, which is expected to reduce due to the quality of the scheme and the fact that providers upgraded their underground services before the scheme was complete. The notice to all statutory providers that they would have to pay to reinstate the public realm to the same standard if they disturbed it by excavations within 5 years also avoided the significant detriment that occurs when utilities companies tear up streets and do poor reinstatement. We were advised that all providers complied and carried out work during the upgrade.

In principle, all standard forms of road markings have been replaced with ‘suggested’ pathways and separations for traffic and pedestrians and complete reliance on the Highway Code (‘pedestrians should only cross the road where and when it is safe to do so’. ‘Drivers should give way to the right, drive with due care and attention, only park where they are legally allowed to’) and the more social behavior of both drivers and pedestrians when they are brought together in an uncontrolled setting at low design speeds.

This was the busiest junction in Cheshire, with 25,000 vehicle movements per day and the fourth worst performing retail centre in Cheshire East. It now accommodates a similar volume of traffic, but since average speeds have fallen to below 20mph, drive times through the centre are significantly reduced. Anecdotally people feel safer crossing the carriageway and cars will stop for them, make eye-contact and usually elicit a wave of thanks from the pedestrian.

Much of the success of the street lies in the carefully selected materials (from China) and street furniture (from Italy) and even if the junction hadn’t been reworked, this beautification scheme has made a significant difference to Park Lane. This significantly improved regime has encouraged the 75 local shops to take advantage of the enlarged pedestrian domain to offer al fresco dining, café culture and display of wares. Furthermore, the traders, including over 250 local businesses, have formed a ‘business forum’ to work collectively to take advantage of the new opportunities created. For example a new Farmers Market has been established and they hold a regular ‘business breakfast’. It is also encouraging to see a large pedestrian area outside the church, fully accommodating weddings and funerals, for which the passing traffic appears to pay respect by moving slowly and gracefully by.

Some evidence relating to the success of the scheme has been gathered by the council. An obvious measure of success is that several new occupiers have moved into previously unoccupied sites (including Waitrose, Asda and Costa Coffee) and a number of new independent shops have replaced others that closed down or moved away. However, there remain five charity shops, which is still substantial for such a short street.

Both the community and Council have made substantial efforts to identify the local mining heritage and integrate this as part of the place branding both in the pit names plates on the footpath and in the gateway markers. The wider heritage of the area is captured in the themes and design of the artist-designed gateways, with each choosing a theme that represents the heritage of the area you will travel to on that route.

An opinion survey of local businesses undertaken by the Council points to an expectation of increased footfall, higher business turnover, and cites convenience of parking, higher perception of safety at night, reduction in vandalism and higher quality of public/pedestrian space, as benefits of the scheme. Firm evidence indicates a wider range of shops, with fewer charity shops and fewer voids. Anecdotal evidence suggests the residential property values have increased. An effect possibly indicated by the opening of a new estates agent’s office in the village.
Furthermore there are greatly improved accident statistics (in terms of severity and frequency), average traffic speed is now consistently below 20mph (despite no change to the local speed limits) and air pollution has fallen significantly.

The truly great thing about this street scheme is the transformation from the sheer ordinariness of a hostile road junction that provided some local needs where both functions were failing, to a place that provides the context for and even encourages respectful and responsible human engagement.

The value of this beyond Poynton is that there are so many ordinary towns and villages that could be transformed in this way to become interesting and vibrant places once more.
The scale of the place is also an interesting learning point. This is a small town scheme, which has been driven by a local group. There is perhaps a preconception that innovative schemes of this type and scale can only be achieved in neighbourhoods of large cities, where there is the profile and scale of public sector support and expertise available centrally.