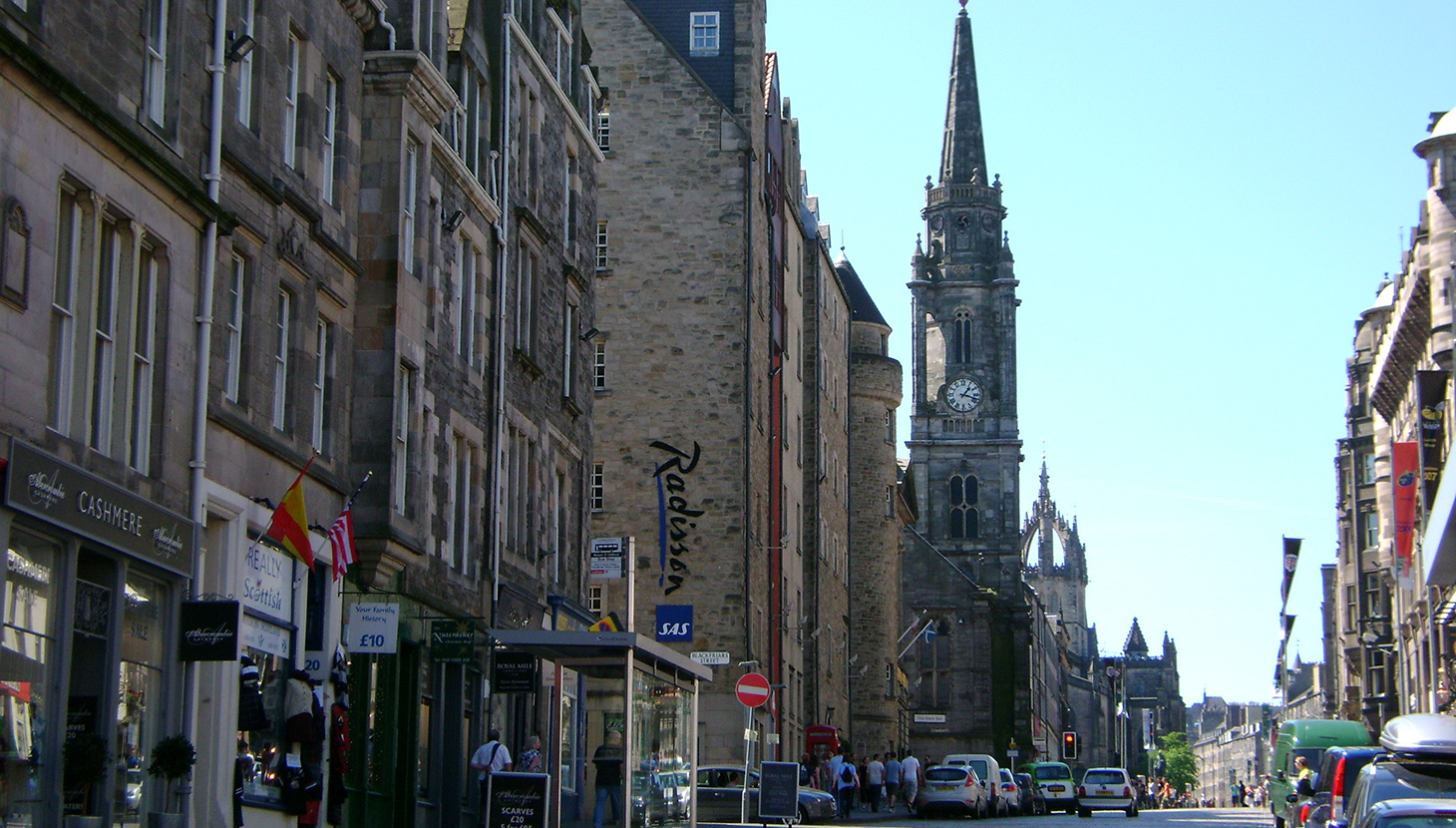 From early times to the present day, Edinburgh most important historical, cultural and political events have revolved around the Royal Mile. Without doubt, this street has been the centre of the city’s economic activity and markets, political discussion and struggles, and cultural and intellectual activities. It is a wonderful place to visit, full of history, character, and identity, and one of the most lively and active places in the city. The Royal Mile, a street where history, politics and culture come alive, provides a diverse range of activities for a very diverse mix of visitors.

The Royal Mile consists of several interlinked streets forming the main thoroughfare of Edinburgh’s Old Town. It links some of the most important places in Scottish history, with the historic Edinburgh Castle at one end and the Scottish Parliament at the other. The actual streets that form The Royal Mile are the Castle Esplanade, Castlehill, Lawnmarket, High Street, Canongate, and Abbey Strand. This group of streets have a very strong physical three-dimensional quality. They sit on a ridge leading to The Castle, in a setting where the local topography determined both route and alignment. The combination of topography with the physical qualities of the built environment, the building heights, typologies, vistas and open areas, play a key role in the development of a sense of place.

However, this strong sense of place is not only the result of the physical attributes of the street, but also of its historic character and vibrant everyday activity. Cultural events and social activities have always been a distinctive landmark of The Royal Mile, both in past and present times. The Royal Mile is home to the Edinburgh International Festival, the Edinburgh Military Tattoo Festival, and the Hogmanay Street Party, some of the cultural activities that support Edinburgh’s well-deserved reputation as ‘The Festival City’. As a result of this exuberant activity, the Royal Mile is today one of the most important tourist destinations in Scotland. Every day it receives thousands of visitors from both Edinburgh and overseas. Visitors include families, young people, students, professionals, and the elderly. Its mix of uses and high intensity of activity play a key role in supporting the city’s local economy.

One of the highlights of The Royal Mile is its ability to adapt over time. The street functions as a historic environment that, while significantly changing and evolving over time, has maintained its historic character and value. Historical and political developments have left a valuable physical footprint in the form of buildings and public spaces. From the early establishment of The Castle centuries ago, to the recent development of the Scottish Parliament, The Royal Mile has been home to relevant events in Scottish history, incorporating these events into its physical footprint (allowing for the expression of history in the built environment), and preserving a strong identity.

The Royal Mile has a very powerful architectural legacy, ranging from historic and listed buildings to first class modern iconic architecture and small-scale modern insertions. Unfortunately, its strong historic character has been affected by misplaced mid 20th century planning buildings, which in certain sectors of the street affect the enclosure and reduce the quality of the public realm. In addition, while some of the modern interventions are outstanding, some of its iconic architecture provides a limited contribution to the urban form. The Scottish Parliament, although highly praised from an architectural perspective, fails to address the street and creates spaces that lack the urbanity of the historic sections of the Royal Mile.

The Royal Mile promotes a walking friendly city and encourages urban living. It is a street shaped by its natural context just as much as by the historical developments surrounding it. Both topography and history have played a key role in shaping the street and developing its magnificent character. Its physical form and development represents the culture, history and identity of Edinburgh and Scotland. As such, the Royal Mile reflects history and change, embracing both the past and the future by continuing to play an important role in trade, defence, civic functions and government, tourism and economic development. Because of its prominent role in Scottish history and politics, and its current role as a tourism hotspot, the Royal Mile is a space that works at an international, national and city scale rather than at a local scale. As such, it is the focus for an entire city and nation, and its contribution and value should be understood within this context.

The Nomination of The Royal Mile by the Academy of Urbanism has developed a healthy discussion about its role and future. This discussion has not been limited to the collection of streets that form The Royal Mile, but has covered the future and role of Edinburgh as a whole. The events and presentations related to the Nomination have been successful in conveying the message and the richness of the urban dynamics in the Royal Mile.