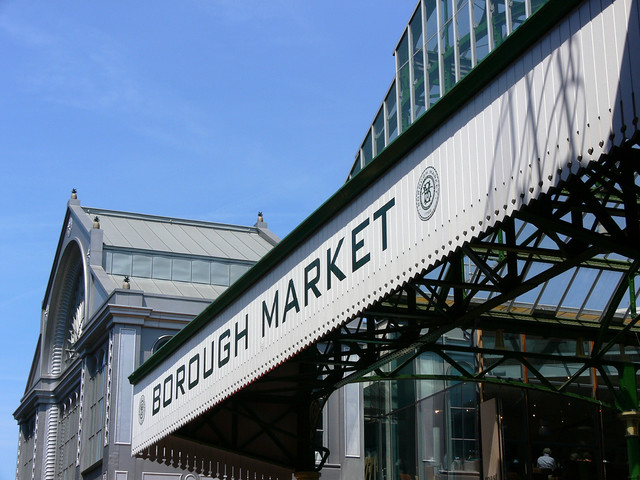 Borough Market is located just to the south side of London Bridge at the junction of Southark Street and Borough High Street. The triangular site measuring approximately 4.5 acres is bounded by the High Street, Stoney Street and Winchester Walk. The market is located immediately to the south of Southark Cathedral at the southern end of London Bridge.
A market has been present in this location for over one thousand years. It was relocated to its present site in 1756 in the shadow of St Saviour’s Church.

The aims of the market were and remain two-fold; to hold a market and to contribute profit from the market for the poor. Borough Market is managed by 16 Trustees and run by a small team of office staff. The trustees include community representatives and local residents and is governed by acts of parliament dating back to the18th century. In 1999 the Market was registered as a charity. By the late 1960’s riverside wharfs along the Thames were vacant and the market reflected the surrounding atmosphere of neglect and decline.

Further years of decline in the wholesale fruit and vegetable trade, and changing consumer shopping patterns meant that by the early 1990’s the market was facing financial ruin. The trustees had to rethink the whole nature of the market and surrounding properties. They embarked on a vision to create the best food market in the UK. The market has benefited from the times. Since the BSE crisis of the late 1980’s there has been a growing popularity in home produced and regional foods, the holding of farmers markets has become common-place coinciding with a country-wide increased interest in food. The first big food event to be held at Borough Market was the staging of the “Food Lovers Fair” as part of the Southark Festival in November 1998. Initially with twelve traders the specialist retail market has continued to grow as a major attraction. Indeed the pace of the growth of the size and success of the market over the last decade is that there is no mention of Borough Market my copy 1999 Time Out Guide. Today it is a popular attraction in London. The form of the market and surrounding streets follow the medieval street pattern. There are no great set pieces, but an unfolding series of views and experiences.

The railway cuts through at the upper level on a series of bridges and viaducts. The market is part way through a refurbishment programme which has been affected by uncertainty of the Thameslink 2000 Project which includes demolition of a number of existing buildings and construction of a new viaduct.

The public realm is widely accessible and used by a diversity of people. Borough Market is a neighborhood, city and national attraction drawing a mix of local people, traders, visitors and tourists. During the typical day the pattern of use of the market goes through distinct transformation as the function and users changes. Despite the decline of the wholesale fruit and vegetable market this business is still at the core of the sites operations. For six nights a week Borough Market is at it’s busiest. A typical wholesale trader’s day starts at around 2am. Throughout the night, large container trucks transport fresh fruit and vegetables from producers. They are unloaded in Stoney Street by a team of ‘pitching porters’ and stacked on the traders stands to await the arrival of customers. In the early hours, greengrocers, restaurateurs and hoteliers from the City, West End and the South East come to select the freshest produce available. The local café and pubs in and around the market complete the hive of activity. By 9am, most of the trading has finished, leaving the Trustees team of ‘sweepers’ to clear away the debris. Since 1999, the very successful weekend gourmet retail market consisting of up to 70 stalls and stands has been developed.

At 6am on Fridays and 4am on Saturday mornings the retail market is set out. By 10-00 am producers from all over the country bring a range of fresh produce to the market, including; fish, meats, vegetables, ciders, cheeses, breads, coffees, cakes and patisseries. To ensure that a range of quality produce is maintained, the Trustees have appointed an Advisory Food Committee comprising stallholders and Trustees staff. A waiting list is maintained to encourage new traders as space allows. The Cheshire Cheese I purchased from one of the cheese stalls (I was told one of only two producers left in the country) was delicious, but the loaf at £4 (6 euros) was rather steep. The activity of the market spills out into the surrounding streets.

In addition to the market the area now also boasts an increasing range of high quality food shops in premises situated around the wholesale core. Following the arrival of Neil’s Yard Dairies in 1997, there are further retailers, adding to the diverse range of produce on sale around the Market. It is noticeable how the market has been a catalyst for wider regeneration that has spread from the core to the surrounding streets. The streets are vibrant. The only hole in the continuous active frontage is where the refurbishment of the hall taking place along Winchester Walk.

By 6-00 pm the retail market is closed. During the evening the streets surrounding the market take on another life as four pubs surround the immediate perimeter of the market along with numerous bars and restaurants in the neighbourhood are packed with customers.
Adjacent converted warehouses alongside new affordable apartments provide homes for local people and city workers.

The refurbishment programme started with an architectural competition held in 1995 won by Greig and Stephenson who has continued to be closely involved in the refurbishment programme over the last decade. The implementation to date has been carried out well. The Old Floral Hall Portico was acquired for £1 and was relocated from the Convent Garden Market to a site within the market on Stoney Street. The integration of the structure again designed by Greig and Stephenson accommodates market stalls on the ground floor and a restaurant on the upper floor. The building sits remarkably comfortably within its surroundings with the new intervention characteristic of the organic way the market had grown with a haphazard form and juxtaposition of buildings.

The historic form of the market stalls in the form of islands has been maintained, with the customers and visitors experiencing a sense of discovery as one wanders under the aches amongst the colourful stalls and buzzing atmosphere.

Accessibility is good. London Bridge mainline rail station and Underground station are located in close proximity on Borough High Street where there are numerous bus stops. Riverboat access is available at London Bridge City Pier. Good pedestrian connections are achieved through the dense network of the surrounding streets including to the South Bank and Thames Walk.
The place is extremely popular. On the Saturday morning when we visited at 10-30 crowds of shoppers and visitors were already busy visiting the food market. By midday the Market and the surrounding streets were packed. At times the sheer numbers of people makes it difficult to move around especially for the less mobile and for small children in the crowds.

The Market has been voted London’s most popular market in the Time Out’s publication’s retail surveys. In 2003 it won the Visit London award for the most popular London experience, also voted for by the public. Similar accolades have appeared in the Evening Standard magazine as well as national newspapers. Borough Market has become a model for markets all over the UK. The market has become twinned with Boqueria Market in Barcelona.

Borough Market is a living example of the 24 hour city. It has demonstrated flexibility as the functions of this place have changed to respond to customer preference, whilst maintaining it’s role as a important destination within Southwark. In looking to the future the growing debate over diet, problems with obesity and the sustainability of the way we produce food, it has been suggested that the role of the market can act as an educational focus as well as continuing its historic social role. Borough Market is located in an enclosed and uncompromising location with limited frontage to Borough High Street.

Yet it is a successful place and piece of urbanism where the focus of activity takes place within the interior has changed and responded over time, and has encouraged wider regeneration.
The Borough Market Book “From Roots to Renaissance” sums up when quoting “what can be achieved when people, place and politics collaborate”