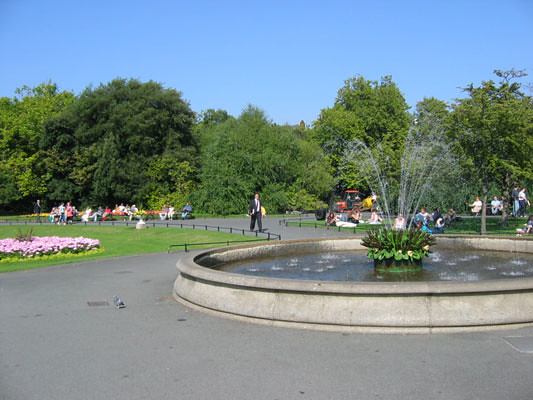 St Stephen’s Green is set within a large-scale urban space enclosed by buildings on all four sides, with the park set within and separated from the building frontages by a continuous road around the perimeter. Surrounding streets connect into the four corners of the square. To the north-east corner Grafton Street; the main shopping street runs north towards the River Liffey, with King Street to the west. The south-west corner Harcourt Street runs south, with Cuffe Street heading west. Different conditions exist to the other two corners. In the south east corner Earlsfort Street approaches from the south, with Leeson Street heading south easterly towards the Grand Canal. In the north-east corner a single street Merrion Row heads to the east, with a staggered offset to the north along Kildare Street. The green represents one of the most important and largest public spaces within the city centre of Dublin. The park covers an area of 22 acres, is roughly rectangular and measures approximately 550 by 450 metres. In medieval times, St. Stephen’s Green was a marshy common on the edge of the city, used for grazing. In 1663, Dublin Corporation seeing an opportunity to raise much needed revenue decided to enclose the centre of the common, and to sell land around the perimeter for building. The park was enclosed with a wall in 1664. The houses built around the Green were rapidly replaced by the Georgian buildings which provided enclosure to the square. In 1814 the wall was replaced with railings, although it was not until 1877 that parliament passed an Act to reopen St Stephens Green to the public. The park has been in its current form since 1880.

Today, St Stephen’s Green is owned and managed by the Office of Public Works. The organisation is responsible for planning through to project implementation including daily upkeep and maintenance. The green is freely accessible to all. It is open from 8am on weekdays and a more leisurely 10am on Sundays and Bank Holidays, with the numerous gates being locked twenty minutes before dusk. Gates are located in each of the four corners of the square, with seven additional pedestrian access locations on the north, east and south sides of the green. There are no entrances along the western edge of the green. The different spaces within the park and the range of events organised by the Office of the Public Works respond to the variety of the park’s users.

An extensive programme of events is held throughout the summer in St Stephen’s Green. These include family days, music programmes, and garden, history and environment walks. Had the weather been better on our visit we could have enjoyed the family day which included a magic show, face painting, balloon modeller and a Punch and Judy show, and the music programme with a display of swing dancing and concert of popular music in the bandstand. Events apart, the park is extremely popular. I visited a week later on a glorious Friday morning and the park was packed with strollers, office workers taking a morning break, older people sitting on the park benches and children in the playground and feeding the ducks.

The park is beautifully maintained reflecting care and civic pride. Traffic management changes implemented in 2004 around the square have greatly reduced the volume of traffic around the edge of the green and works to the public realm improved the environment. However, the temporary bollarding located within the carriageway is unsightly, and traffic speeds are excessive for this city centre location. Traffic signalled Pedestrian crossings are provided from the corners of the square to the green, but the length of the waiting time to cross certainly felt too much priority is given to vehicular traffic. Along the four sides of the square there are no additional crossings resulting in poor pedestrian connectivity between the buildings enclosing the square and the green. There is limited vehicular movement along the western side of the square but the lack of activity generating uses apart from the Unitarian Church result in the loss of the opportunity to animate this space.

The public realm improvements including the rationalisation of the parking around the perimeter of the park, pavement finishes and signage provides an impressive edge to the green. Within the park the upgraded works department nestles unobtrusively within the trees. The buildings enclosing the square comprise more recent buildings some reflecting the scale and proportion of the original Georgian buildings. Relatively little survives from the 18th and 19th and there are no recent buildings of exceptional architectural merit. However, the collection of buildings form a comfortable consistency of enclosure to the space and a simple backdrop around the green.

To the north western corner is the St Stephen’s Green Shopping Centre forming the termination of Grafton Street; Dublin’s main shopping street bringing activity and vibrancy to this corner of the square. Built in October 1988 it was, at the time, Ireland’s largest shopping centre. The shopping centre is largely inward looking towards an internal mall. Whilst the interior is bright and airy the centre does little to animate the street and makes little contribution in its relationship to the green. The north-western corner of the square is also the terminus of Line B of the Luas tram system.

To the northern side of the square a mix of shops, hotels including the historic Shelbourne Hotel and restaurants between Grafton Street and Kildare Street benefit from views across to the green and animate the south facing outer pavements of the square. To the western side a gibbet; a place of execution was formerly located on the site of the Royal College of Surgeons, and is perhaps why the western side of the square developed more slowly that the other sides of the square. The southern and eastern edges of the square are dominated primarily by office uses. Loreto College, St. Stephen’s Green, one of Ireland’s best-known fee-paying schools for girls, is located on the east side of the Green. On the south and eastern frontages more recent larger footprint buildings with single entrances rather than the multiple doorways of the historic Georgian pattern has resulted in some significant lengths of dead frontage. While the central park of St. Stephen’s Green is one of three ancient commons in the city, its current layout owes much to the restorations of the 1880. The north west corner is a garden for the blind with scented plants. Running almost along the length of the northern edge of the green is a large lake spanned by O’Connell Bridge and fronted by an ornamental gazebo. The poor weather on our visit was more than compensated by the lavish unexpected reception arranged by the Office of Public Works in the gazebo.

To the south side of the main garden circle is more open heath surrounding a bandstand. Throughout the green monuments and sculptures depict the history of the green. The north west entrance is denoted by Fusilier’s Arch creating the entry from Grafton Street, which commemorates the Royal Dublin Fusiliers who lost their lives in Second Boer War. To the south east entrance connecting to Leeson Street is the Three Fates; a gift from the German people in thanks for Irish help to refugees after World War II. To the west is a statue of Lord Ardilaun, the man who gave the Green to the city. The green also includes the Yeats memorial garden with a sculpture by Henry Moore and a bust of James Joyce facing his former university at Newman House. Others include a memorial to the Fenian leader Jeremiah O’Donovan Rossa, a bronze statue at the Merrion Row corner of Theobald Wolfe Tone, the leader of 1798, a memorial to the great famine of 1845-1850 by Edward Delaney, a bust of Constance Markievicz on the south of the central garden and a statue of Robert Emmet standing opposite his birthplace (now demolished) at No 124.

St Stephens Green is an extremely valuable asset for Dublin. The square is impressive in terms of scale and enclosure, although perhaps lacking vitality around some of the edges. The green set within the centre is a city park of the highest quality and managed and maintained extremely well by the Office of Public Works.