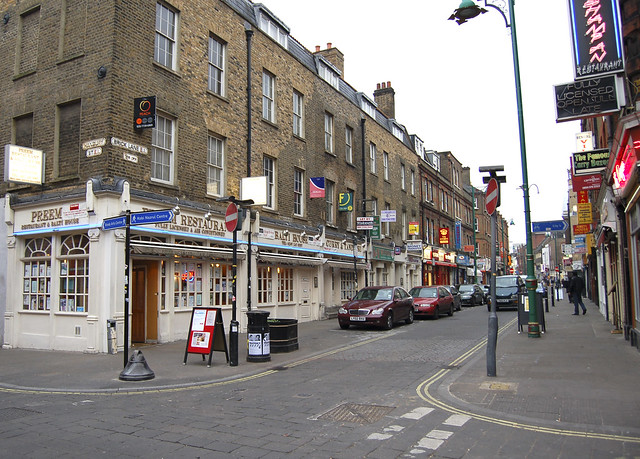 The fantastic cultural vibrancy and diversity of Brick Lane seen today is the result of centuries of change, as wave after wave of immigrants have settled in the area and each added their unique ingredients to the strong cultural mix of the East End. Irish, Huguenot, Jewish and Bangladeshi communities have each settled in turn in the area and given rise to a rich tapestry of street names, buildings and culinary specialities. Hence, elegant rows of Georgian town houses, textile industries, bagel shops and Bengali restaurants all sit alongside each other and now play part in a cultural strategy for the area that builds on and celebrates this legacy.

Brick Lane receives strong support from Tower Hamlets Local Authority and funding bodies such at the Cultural Industries Development Agency as part of a development strategy to grow the cultural industries locally. The commercial success and viability of the street is good and in recent years the area has seen increasing inward investment with the resultant expansion of fashion and music business and associated bars and nightlife in addition to existing Bengali restaurants, clothing and leather shops.

The local authority has also managed the emerging Banglatown identity promoted by some members of the Bangladeshi community with other, sometime differing, local community needs and priorities. The successful outcome of this work is visible in many ways and the strong local character and distinctiveness of the area is visible, for example, in the annual Brick Lane Festival, which celebrates, local music, fashion and food, the Brick Lane Baishaki Mela, which celebrates Bengali arts, music and culture every May and the Banglatown International Curry Festival, which celebrates, well, curry..… each of these event attract upwards of 60,000 visitors over a couple of days.

The governance of the street is also strong – there is clear evidence of a good partnership between the local communities and Tower Hamlets. There is also a history of vocal and active opposition to unwanted development in the area from the Spitalfields Society – an well-heeled architectural conservation lobby set up to preserve the Georgian character of the area – and more generally by those opposed to the continuing pressure expansion plans of the City which have already overwhelmed nearby Spitalfields Market. Part of Brick Lanes current success with the cultural industries is as a result of the street’s apparent ‘edginess’ and gentrification may impact negatively on this over time. Balancing the demands of all of the different local actors and agencies is complicated but the current good social sustainability of the street is well established.

The physical environment and user friendliness of Brick Lane is of mixed quality and overall has been assessed as poor. The historically fine urban grain of the area contains a number of 17th and 18th century buildings that have proven robust and adaptable over time. This is true also of larger warehouse buildings, such as the Truman Brewery, which have been regenerated as part of the cultural industry strategy and houses exhibitions, clubs and bars. However, the street is severed by a number of significant elements of infrastructure such as railway tunnels and bridges, which disrupt the urban grain and make the legibility and permeability of the street network poor.

The streetscape varies along the length of the Brick Lane, from the busy southern Banglatown end of the street immediately off Whitechapel Road, through the central more gentrified ‘cultural industry’ section, to the less attractive northern end of the street towards the junction with Bethnal Green Road. The two ends of the street also have a number of poor quality and poorly maintained shop fronts and unattractive out-of-hours shutters. Overall, Brick Lane is poorly laid out with functional competition between pedestrians, cyclists and vehicles leading to a cluttered and unattractive environment. It is also lacks an effective street cleaning strategy and there is a lot of litter and refuse generated by local businesses and visitors. A consequence of its many successes!