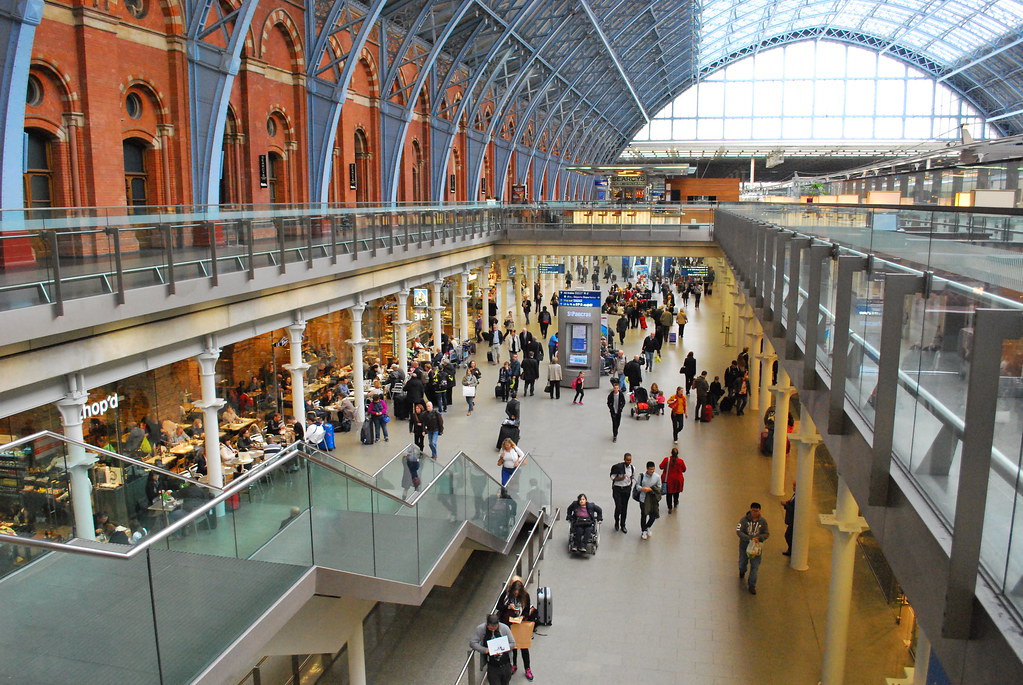 Transport hub as exchange nexus
Perhaps these major transport hubs are the new ‘crossroads’ around which the market traders gather, business is done and information exchanged.

Role of romanticism
There is definitely still a romantic aspect to travel that makes a major international terminus like this an exciting place to be.

Democracy and exclusivity
But to what extent is this open, democratic and available to all or is it exclusive and catering primarily to the wealthy?

Beyond architecture
Wonderful architecture and engineering does not necessarily generate a great place. More ingredients are necessary, beyond the physical.

St Pancras was a Roman boy, possibly Turkish, who was martyred and adopted as the patron saint of children.

St Pancras station is certainly a magnificent piece of architecture and an extraordinary example of nineteenth century engineering. The assessment team were treated to a fascinating presentation of the feat of planning, design and construction management which has lead to the development we see today and an extensive tour of the complex by some passionate and extremely well informed people.

We learnt a great deal about the history of the building and about the way in which the original developers, the Midland Railway Co, used the opportunity to promote the products and engineering expertise of the Midlands. This is manifest in the cast iron and steel, the brickwork and the Minton Tiles, all from the east Midlands. This is an extraordinary example of a building project being used for the purpose of ‘corporate branding’.

It is clear that bringing the Victorian station into use as a modern facility required a profound understanding of the heritage asset and there is no doubt that the careful balance of pragmatic interventions to meet operational requirements with the care of the historic fabric is a triumph.

Today St Pancras International is a major London landmark and the reconfiguration of the train deck and platforms to bring light into the arcade and the previously enclosed under croft, once used for the storage of coal and ale, is now a vibrant public space.

This , however, has to be seen in the context of what we were told by the executive – that the design achieved all the stated aims of creating a functional and user friendly station, presenting strong heritage elements and character, meeting safety and security requirements, maximising the commercial opportunities and integrating the station into the surrounding area. We would absolutely agree that all of these have been achieved, perhaps with the exception of the last one. The presentation talked a lot about ‘growing the business’ and health and safety, but the ‘vision’ was not about a vision for the place, it was for HS1 ‘to be the world’s leading high speed railway’.

We were told that the station is the focus of all interaction with the five different train operators, the hotel, retailers ‘and of course our neighbours’. There was no mention of the public. It was never made entirely clear, in spite of numerous direct questions, as to the boundary of the ‘Great Place’. It was assumed by many that it was the extremity of the main building mass and its immediate environs. The station at St Pancras is a very enclosed space, it is a terminus, it provides world class facilities for the traveller. It is unclear and it was not discussed, to what extent the investment has filtered out to surrounding areas.

Certainly, the redevelopment of the station, together with Kings Cross has catalysed, as it was bound to do, the development of the surrounding area, Kings Place, Regents Quarter and the emerging Kings Cross development. The opening up of the station concourse and the introduction of bars, shops, hotels and apartments has changed the environment from a functional station to a place in its own right. There are reasons to visit and to linger, everything from the high end dress shops to organic food stalls, Fortnum and Masons and the world’s longest champagne bar. It has, in the long tradition of stations, become somewhere not only for travellers but for people wanting a place to meet. We discovered that of the 48 million people using the station last year twenty percent were not there to travel.

It is an extraordinarily dramatic space, cathedral like in its structure and proportions. Externally it is identifiable by anyone who knows this part of London or describable for those who don’t due to its unique character. Internally the slender columns, a legacy of Barlow’s engineering skill, now form an arcade at street level and a new civic space.

St Pancras is a major commercial enterprise. In addition to providing an international transport hub the developers HS1 and its partners, have taken the opportunity to develop significant retail opportunities. The operations director told us that visitor dwell time has increased for 27 minutes in 2009 to 47 minutes in 2014 and sales per visitor continue to outperform the high street. There has, however, been a policy to avoid only leasing to multiples and high street brands and 20% of units are made available to independents.

Retail week, 06 March 2014 says: “St Pancras International was one of the first transport hubs to kick-start a change in the way travel retail is done, helping to make stations bona fide shopping destinations”. The place is brought to life to a degree by firstly the magnificent restoration of the building, which in itself is fairly spellbinding. The very careful conversion of space for all non-rail commercial operations has been executed to a matching quality and standard. Major art work and sculptures play an excellent role. It is worth noting here that a well conceived, although perhaps not perfectly realised, piece of sculpture such as the ‘Meeting Point’, a huge bronze of kissing lovers, can contribute out of all proportion to its scale and cost, to the identity of a place. Some ‘grit’ has entered the mix, such as by the placing of three pianos, which are available for any visitor to play at any time. Otherwise everything is tightly controlled and the impression is definitely of privatised space and of crowd management and movement control. This is of course inevitable in this context but, in addition, as one of the assessors so eloquently put it, “there does seem to be a calming influence of the beautiful magnificence of the building on those who visit and pass through it.

Whilst undoubtedly a ‘Great Place’ in itself, it does not achieve high scores against the very varied criteria set out by the Academy. It may well be a magnificent place for the more affluent social classes, but it does not cater for a conventional mixed ‘community’ including those of lesser financial means. It is predominantly targeted on the pockets of the elite.

The assessors split as to whether or not St Pancras constitutes a place. One view was that it all adds up to a great deal more than the sum of its parts, a great multi-layered railway station, a shopping centre and a heritage asset in its own right, and that it is a new destination and a place to enjoy for those who are travelling and those who are not. An alternative view is that the investment has not been created a great place in accordance with the definitions of the Academy. The starting point was that the building is, and was, a railway station. It needed to be adapted to act as the UK end of the cross-Channel Tunnel services, to accommodate the Bedford to Brighton services, link in to a new underground station as well as continue as the terminus for the Midlands services for which it was originally designed.

It achieves this brilliantly and the key design changes to the historic fabric – extending the glazed element in Barlow’s engine shed roof and cutting slots into the floor to open up the under-croft is a triumph of the architecture over its protected status for all of the right reasons. Although the project has managed to step outside the regulatory controls as a result of the parliamentary act which allows it in the first place, it is a great example of the principle of ‘constructive conservation’ whereby the principal elements that contribute to the building’s significance are protected but other less important aspects are allowed to be changed.

As a high quality railway station, it ticks all of the boxes but, if one wanted to be rather mean spirited about it, aside from the dexterity with which it functions as a railway station, it has successfully managed to incorporate a co-existing shopping mall rather than create a great place. Here again, it is a very well managed shopping mall. By placing it at under-croft level, the station is allowed to function, uncluttered, at its original level.

The St Pancras design code approach to controlling the frontages of the retail units is impeccable, the programme of events and encouragement of piano busking is great and we were taken by their repair and maintenance regimes, including the instant response to vandalism of which there was no sign. On the other hand, it is a constant concern that the high quality finished product that we all aspire to in heritage-led regeneration projects seems to always lead to high-end tenants and a process of gentrification. We accept their argument that they are responding to their key audiences, in which the ABC1s pre-dominate but, taken to its ultimate conclusion, there is a danger of giving an impression of exclusivity when, in the end, it is part of a national rail network that should be available to all.

The Academy’s criteria revolve around a sense of community and I’m not sure whether we can fairly dismiss St Pancras, as a railway station, for failing to create one. Do its audiences of domestic and international travellers, its diners and its shoppers represent a community? There was a debate, unresolved perhaps, as to the role which St Pancras Station plays in creating the new community in the adjoining Kings Cross regeneration area. Again, it is hard to apply some of the usual urban design principles of permeable linkages and connections with a terminus railway station.

This case study certainly highlights issues of public and private space and questions the definitions of ‘place’. One can’t help thinking of the way in which passengers are manipulated in the departure lounges of international airports. Could these be described as places? It is certainly a fabulous station, feedback from passengers could not be more positive but is it a ‘great place’ by the criteria we use?