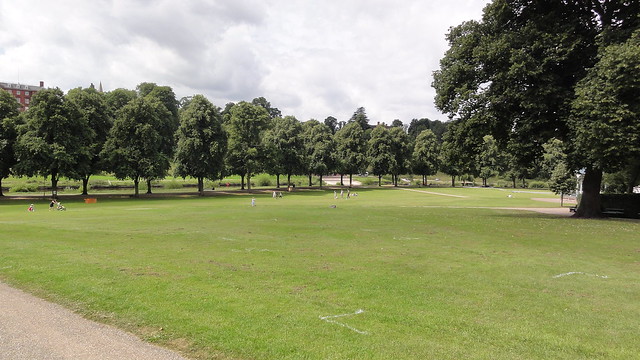 1. Looking after what you’ve got

The move to single tier local government and the loss of status experienced by Shrewsbury was obviously controversial, but the decision to leave substantial responsibilities for managing and promoting the town centre with the Town Council was a wise one – reflected in the superb management of Quarry Park and other spaces in the town. It is also a useful reminder that looking after what you’ve got is at least as important as looking for the next big capital project, arguably more so. Shrewsbury looks loved and that’s a very engaging quality.

Shrewsbury offers valuable learning about how to ensure that old and new combine for mutual benefit – whether at the site scale like a new Costa Coffee in a half timbered Tudor building, or the town-wide scale of retaining setting and character whilst also accommodating substantial new investments such as Theatre Severn and the planned Riverside shopping centre/hotel.

3. Using local identity to promote the town and its enterprises

Shrewsbury offers a range of examples of this – from The Shropshire Food Enterprise Centre, which promotes local food production and contains food enterprise units in a modern high tech complex, to ‘The Original One-Off’ campaign of loyalty cards and visitor marketing, using the distinctive black and white pattern of the historic timber framed buildings.

Shrewsbury makes much of the high quality of life that it offers to its residents and hinterland as a safe and comfortable place with a range of sporting, cultural and commercial facilities and events, with more on the way. Those who govern and manage the town understand the need to constantly invest and update the town’s offer, particularly with a growing population.

“This city is at a prefert well built and populous, carries on a considerable trade and is grown which by the induftry of its inhabitants by the cloth manufacture and trade with the Welfh. For hither almoft all of the commodities of Wales are brought as to one common market, it being inhabited by the Welfh and the Englifh.” (from Camden’s Britannica, 1586)

Shrewsbury is an interesting and charming place. It has a fabulous setting, a long and interesting history, some fine buildings and streetscape. After being one of England’s most prosperous places in mediaeval and Tudor times, more recently the town experienced a gentle relative decline from the mid nineteenth century onwards, as the industrial cities of the West Midlands boomed. But this helped Shrewsbury achieve the useful trick of becoming less important but still quite prosperous – as a market town, a centre for agricultural industries, an administrative centre.

In the modern era, Shrewsbury has benefited from being a substantial place a long way from any other large centre – rather like Exeter, Norwich or York, but without their cultural and economic advantage of a cathedral and university. A large, rural hinterland extending deep into Wales looks to Shrewsbury as its local metropolis. That is likely to have shielded it to a degree from competition with major regional cities and regional-scale shopping/leisure centres.

In today’s world of competitive urbanism, Shrewsbury’s town centre really does feel a bit different. This is thanks largely to an unusually large number of independent shops, the bustling indoor market (which proves that this formula can be successfully revitalised), ever-present heritage and – let’s face it – the relatively low profile of the town compared to many other historic shire towns, which gives an edge of surprise.

With a good quality of life, growing population and an apparently buoyant local economy, there is a lot of positive change happening – for example, substantial new retail and hotel developments, a new museum and cultural space to add to the recently built Theatre Severn, and two large new urban extensions. The town appears to benefit from strong positive leadership, careful thought about how to maintain and enhance its quality of life, and good professionals working cooperatively to put these things together.

Shrewsbury is not a radical place. It is a market town, the traditional hub of a large rural area. It feels risk averse and conservative, with a small C. The cultural offering and quality of life focus predominantly on, dare we say it, the middle class and the middle aged – the year’s big event is the flower show – and the parks and public spaces, though beautifully kept, are very traditional.

These are not criticisms. Indeed, they may indicate a town that knows itself very well: that provides strong internal leadership and partnership, that looks after its assets and its heritage, and that makes the most of opportunities without eroding its qualities.