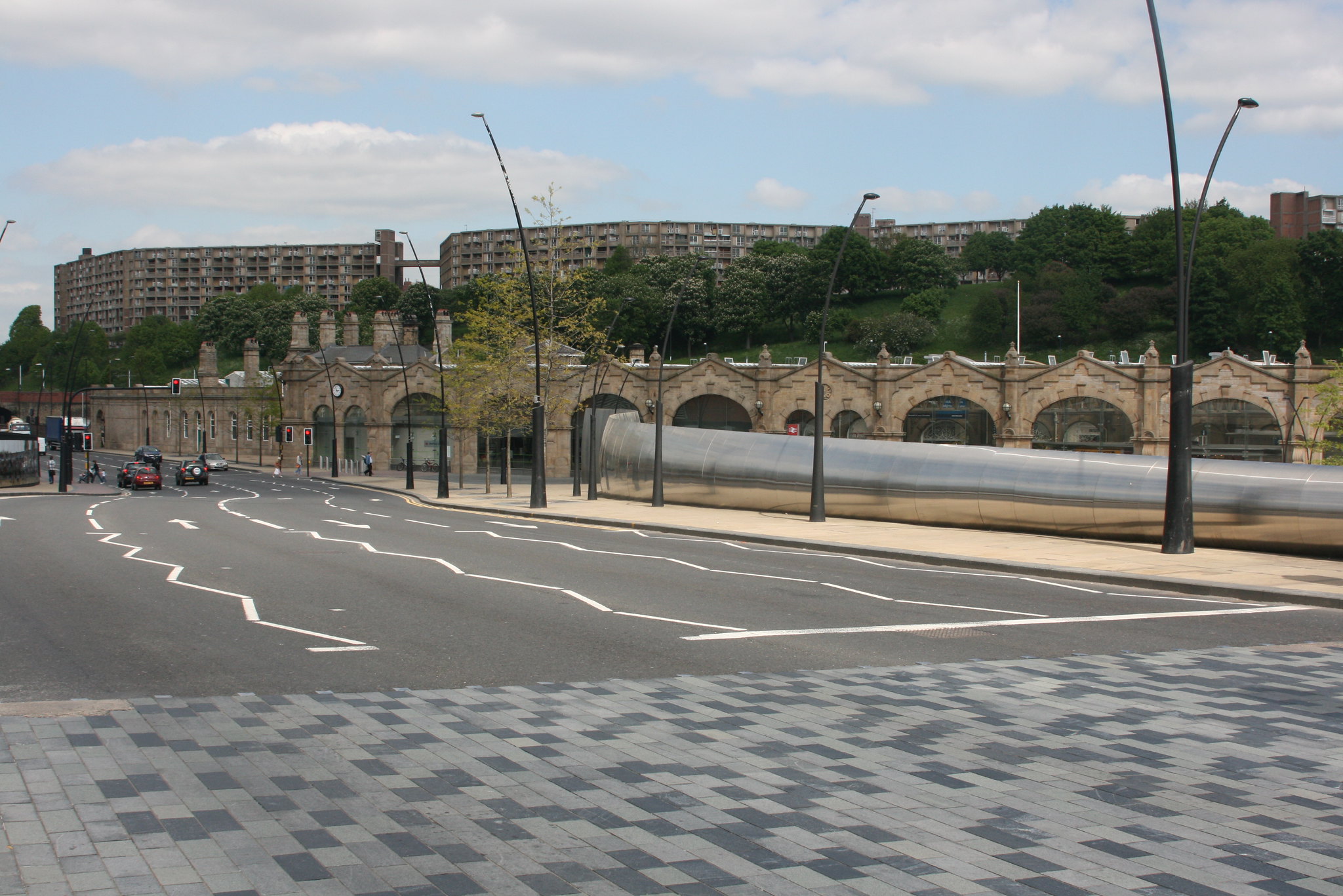 Sheffield has the reputation of being a tough place and reputations take a long time to change. But over the last decade Sheffield has undergone structural change in its urban environment, promoted by strong leadership from MPs, and local government councillors and officers. Dedicated individuals have doggedly persisted with infrastructure changes that have progressively transformed several parts of Sheffield. Sheaf Square is a seminal example of turning a traffic nightmare into a very delightful place.

The Square forms part of a heavily used cross-city route running through the station from the city centre to the Park Hill/Norfolk Park inner suburbs, as well as a connection to the Tram network and projected Sheaf Valley Park. The new square is one of the eight key projects identified in the 2000 City Centre Masterplan and is linked to the refurbishment of the main Railway Station,

Its design clearly draws on references to the geology, landscape, history, culture and the topography of the Pennine setting, the birth place of the steel industry and in particular of stainless steel. Interestingly, all this is handled in a contemporary way, not as nostalgia.
When travelling by train Sheaf Square is the new entry and exit point to Sheffield and, as such, it is an extremely important first and last memory of the place. Previously, when arriving into Sheffield via the station, one was confronted by a road network that primarily considered the needs of fast moving motor traffic. The way into the city by foot was via a subway. The subway has now thankfully gone and the city centre is reached at grade via part of the ‘Gold Route’ with little conscious effort. The Gold Route is a series of linked public spaces throughout the city.

Sheaf Square also forms part of an ambitious landscape plan to reshape the large green spaces located behind the station into the Sheaf Valley Park. This would connect Park Hill to the City Centre and also provide a new park for city centre workers and dwellers.

In Sheaf Square protection from vehicular traffic is given by a gigantic stainless sculpture – the Cutting Edge, designed by a group of Sheffield metalworkers and jewellers to symbolise the progress of a billet of steel through the foundries and mills into a sharpened blade.

Apart from the Cutting Edge the whole Square is a clever display of metaphor and memory of Sheffield’s industrial past with reference to weirs, steel manufacture, anvil furniture, rolling topography and other water features – all well-made products designed in Sheffield.

An alteration to the way vehicular traffic is allowed to behave in Sheaf Square has been an important part of the overall design strategy. By persistent argument/dialogue the authorities in Sheffield have reduced a dual four-lane carriageway (separated into two, two-lane detached roads) into a single two-lane carriageway and have given pedestrian priority by means of a “Baltimore Crossing” across the single carriage. Most importantly this has not reduced the vehicular traffic flow and is a seminal learning example of shifting to pedestrian priority (over vehicular movement) in a spatial design problem.

The Square’s success lies not only in the design but also in the long-term management of the area. City Ambassadors employed directly by Sheffield Council help police it and the other areas on the Gold Route. This is hugely important to the success of the re-engineered Sheffield, as the Ambassadors allow people to safely walk around the city, also encouraging businesses to flourish.

Sheaf Square promotes and enhances the experience of sustainable walking, cycling, rail and tram travel and links them to the bus interchange and localised bus stops. But perhaps its greatest contribution is to the changing atmosphere and image of Sheffield.