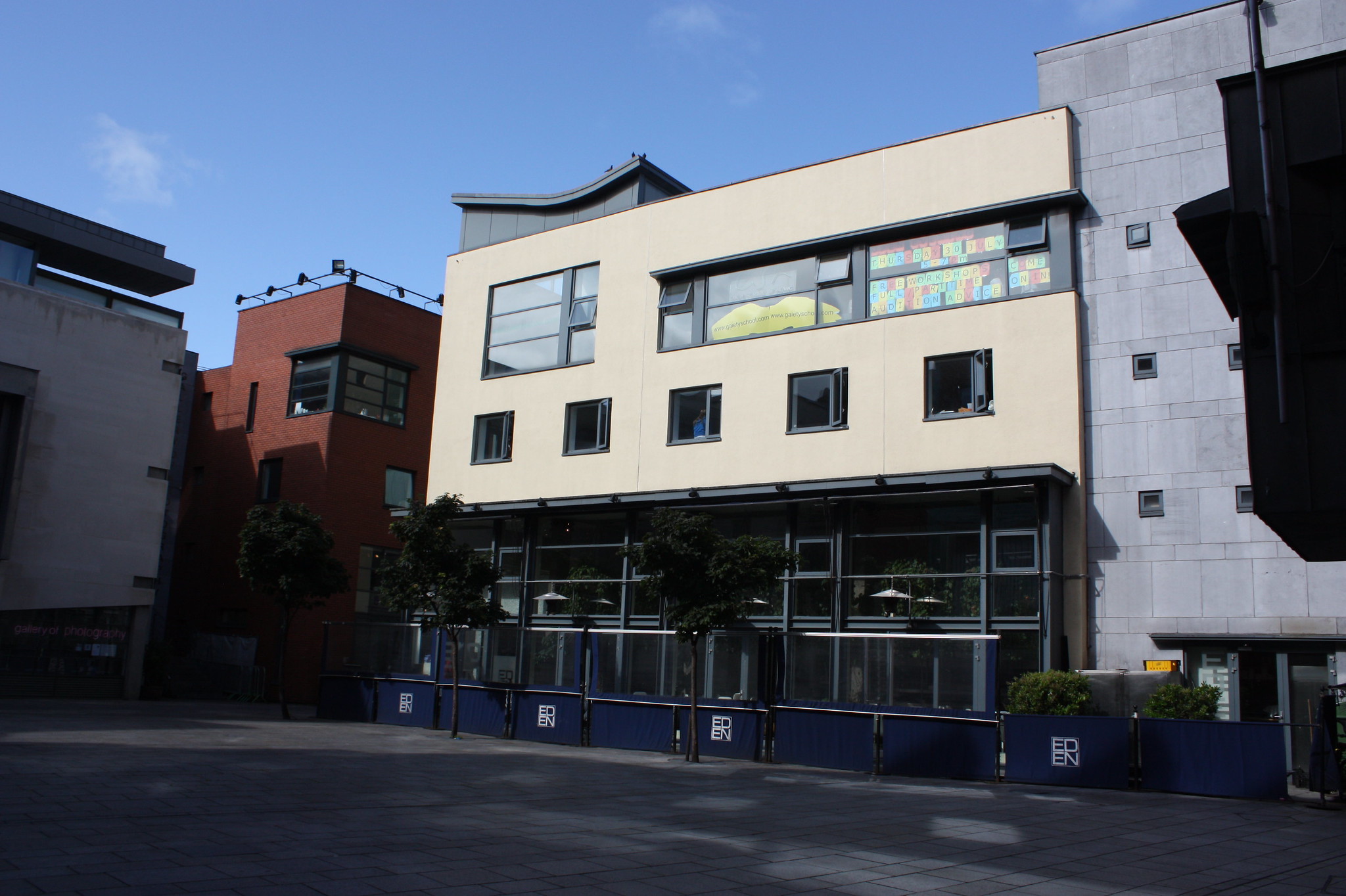 Meeting House Square was born in the early 1990’s out of rebellion against the building of a bus station in an area of central Dublin, in Temple Bar. Through this the ‘1991 Group’ was formed and an alternative Framework Plan was put forward for areas of central Dublin that included Meeting House Square. At the time the square was a car park at the back of various properties. A new idea for the space was as performance and outside auditorium, for both cinema and live stage performances.

To form the four-sided square two new buildings were designed, while only facades (together will some additional accommodation) were added to the other two sides. The result is an external space that is very contained almost cube like with the spatial quality of the small Venetian campo. It is only 23 metres by 32 metres, but it is a landmark outdoor space in Dublin’s city centre. Just like a campo the relationship of the buildings to the square can also be that of a secondary space, rather than an active façade, which also gives the square a dormant and secret quality some of the time. Traffic within the square is solely pedestrian with vehicular access only for services.

Features of the square include an Outdoor Film Screen & Open-air Cultural Centre Stages. Organisations surrounding it include The National Photographic Archive, the IFI, the Gaiety School of Acting, The Photographic Gallery and The Arc (a cultural centre for children). There are also outdoor eating areas for three resident restaurants – The Eden, Il Baccaro & Bar Pintxos. The Square is governed by Temple Bar Cultural Trust which is a private limited company that works on a not-for-profit basis to lead and develop sustainable cultural development for Temple Bar and the city.

When an event takes place on MHSQ all resident organisations and businesses are informed of the activity in advance. All events are programmed and produced, and the square is maintained on a daily and weekly basis. Temple Bar Food Market is held on Saturdays and many types of festivals and fairs are held throughout the year. The space is also hired to private and public businesses for promotions such as the Opera Ireland screening of Don Giovanni, the screening of Bram Stoker’s Dracula and a host of other events.

The maximum capacity for the Square with seated cinema audiences is around 600 and, while it is possible for other adjacent buildings to offer toilet facilities at peak times, the situation is not exactly ideal. Dublin has a high rainfall and there are proposals afoot for permanent but retractable canopies to allow the square to ‘work harder’. In terms of a functioning performance space, the square has become more successful over time and there is now a reason to justify both better sanitary provision and weather protection.

The open and diverse nature of the square increases equality and interaction between different social strata. It improves the potential cohesion between diverse Dublin citizens with a broad range of events that bring together people who might not normally interact .The fact that the majority of the activities programmed by TBCT are free also encourages participation and inclusion. This cannot but improve the social structure and local area, ultimately creating a more diverse and sustainable city.

Meeting House Square is a superb demonstration of how local people can fight for a neighbourhood facility by challenging inconsiderate top-down transport planning. The result is a little gem that is now very much part of Temple Bar and Dublin as a whole.