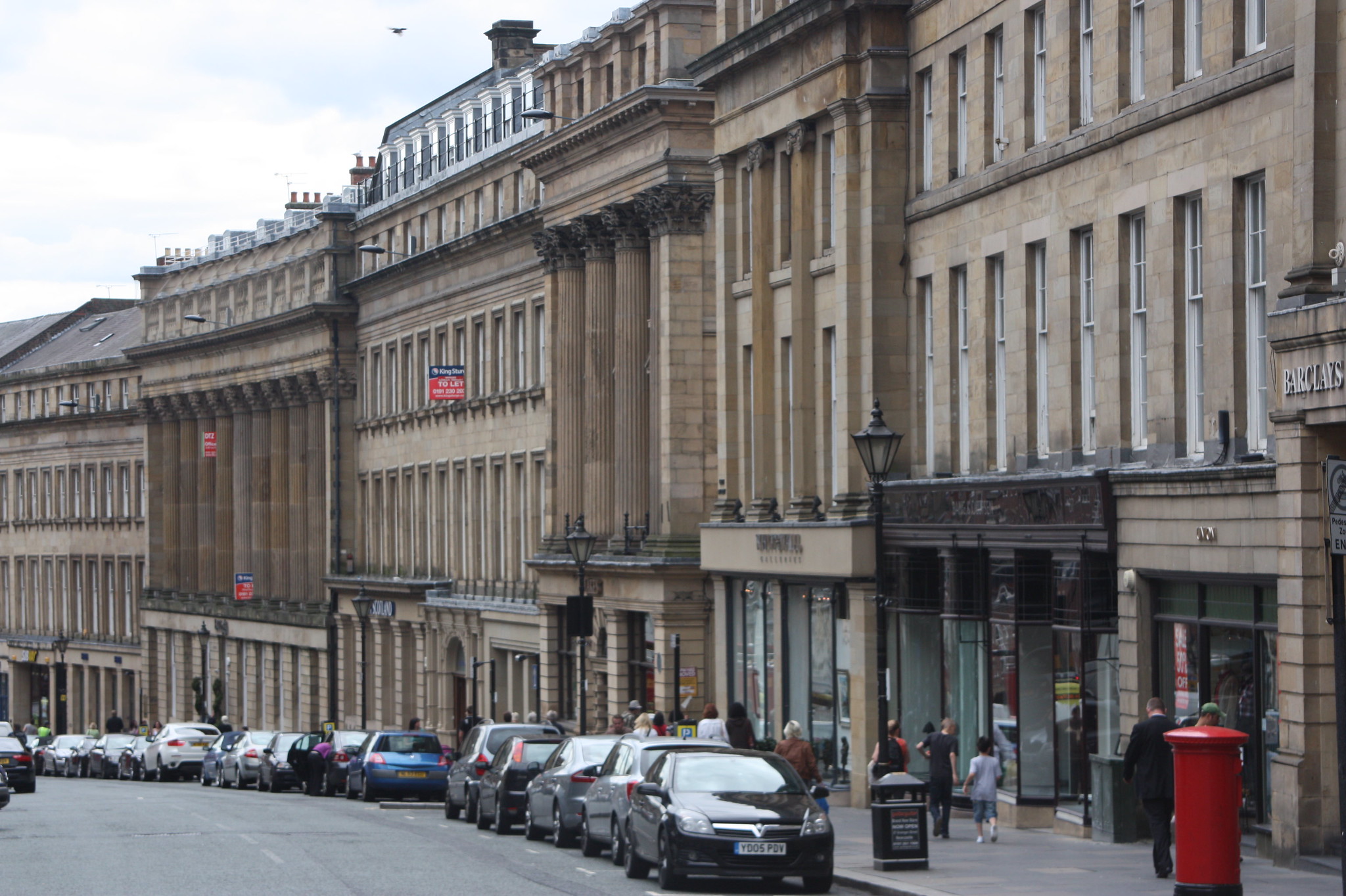 The best thing about the Academy visit to Newcastle was the opportunity to climb Greys Monument. The Academy party, together with a BBC crew, were crammed onto the small balcony around Lord Grey’s feet, with a pigeon’s eye view of the street that has won so many awards.

Grey Street is a street that I would have been very proud of because it was a street that was imaginatively masterplanned. The old bit of Newcastle ran along Big Market to St. Nicholas Cathedral and on to the ‘new’ Castle. To the east of this historic drag lay a large house set in its own extensive grounds. When this became available for development in the 1830s there was an opportunity to extend the town and to create a genteel district to rival Bath or Edinburgh New Town that had been built 50 years earlier. The winner of the competition to masterplan the area was Richard Grainger and, with his architects, he created a masterplan in the Georgian style that, truth be told, was a bit old fashioned in the 1830s on the eve of the Victorian era.

If this had been in Italy, Spain or France the ‘new town’ would have been a formal affair of grand avenues and etoilles (a star shaped junction) regardless of topography. Grainger Town however is a much more ‘English’ solution that responds to the existing grain of the city and the topography of the site. It does this so successfully that today you wouldn’t know that it is a planned neighbourhood, so natural do the streets feel.

Prime amongst these ‘natural’ streets is Grey Street. This follows the course of a brook in a valley that curved through the grounds of the house that stood on the site. Rather than fight the topography, Grey Street follows the curve of the valley climbing up to Greys monument at the highest point of the site. Here the street intersects with Grainger Street and the much older Blackett Street to create something that is almost an etiolle. The street looks effortless, as if it has been winding naturally up the hill for centuries. Yet when you look at the site, and particularly the way that the buildings on its eastern side are squeezed in, it was far from easy to achieve. The unity of these buildings in their façade, together with the highlight of the Theatre Royal and the focal point of Greys Monument, make the street almost perfect. A‘designed naturalism’ that the English do so well.

The street may be almost perfect, but fifteen years ago this perfection was marred because many of the buildings were vacant and the street was clogged with traffic. The vacancy was tackled by the Grainger Town Project, an SRB scheme that ran from 1997 to 2003, bringing £45m of public investment that in turn generated over £194m of private investment. The buildings of Grey Street were promoted for business use with cafes and restaurants on the ground floor. The Academy visited one of the refurbished offices that included an extension to the rear to create modern business space. This is the type of scheme that has halted the migration of business to the Quays. The Academy also visited the Theatre Royal, the jewel in Grey Street’s crown that is also being improved and extended.

A key issue is the public realm of the street. While Grey Street has never been a major through traffic route it has accommodated a lot of parking. The lower part of the street still provides chevron parking and the business lobby is keen that this be preserved. However the upper part of the street and the area around Greys Monument has been subject to a £6.5M public realm scheme. This has seen the street pedestrianised with new seating and lighting to create a new public space in the city.

One of the impressive aspects of the public realm is the level of maintenance. This is based on a Maintenance Charter drawn at the end of the Grainger Town Project. Through this the council has signed up to agreed standards of cleaning and maintenance for the new public spaces and public art in Grainger Town. This is monitored by a quinquennial review commissioned by the City Council and English Heritage.

Grey Street has always been popular because it is beautiful in a very English way. However its popularity remains because it has successfully reinvented itself as a street, stimulating investment in its buildings and public realm. The Grainger Town Project and the City Council have been good custodians of the gem that they have inherited.