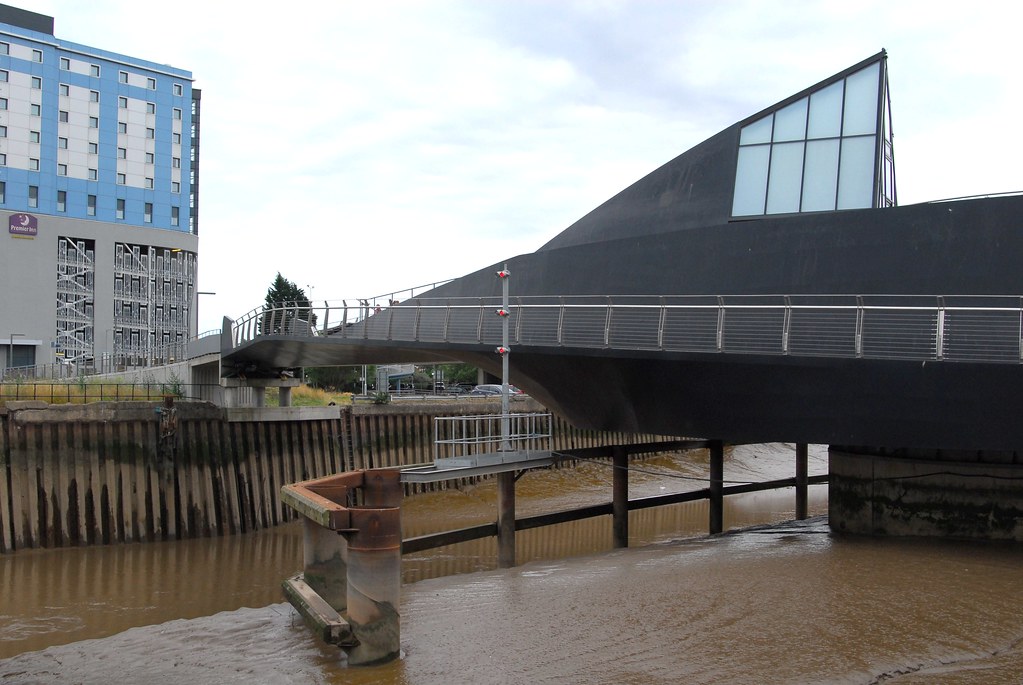 1. Think big with design
A well-conceived change in the infrastructure of a place can have almost immediate impacts on the way the place functions.

2. Physical connections can lead to other connections
A bridge being, by definition, a link between two previously separated places is the most powerful of these.

3. Resist temptation to water-down your ambition
It was, in this case, hugely important that the governing authorities held on to the ambitions for this project and, in the face of some adversity, pressed on to deliver the vision.

4. Great places can come from unlikely spaces
The assessors agreed that the most significant lesson to be drawn from this project is that a bridge can itself create a great place when delivered with this degree of commitment.

Scale Lane Bridge opened in 2013 and connects the east and west parts of the city across the River Hull.
Delivering so much more than just a river crossing, the bridge is an extraordinary structure, an innovative piece of infrastructure that anticipates and contributes to the regeneration of the area. It is an investment for the future success of the city, unlocking potential and value.

Scale Lane is a swing bridge pivoted on the west bank at the end of a medieval lane or staith where the historic Old Town meets the river. As a swing bridge it is a spectacle and a fairground ride rolled into one, a pleasurable and memorable experience. The ‘muscular black painted structure references the context of Hull’s industrial and maritime heritage’ and its integrated artwork plays back the soundscape of its context.

The bridge takes the form of a giant comma sweeping across the river from west to east. The vast concrete drum that forms the counterweight also provides a platform for a variety of relaxing spaces with seating and viewpoints at different levels.

The Scale Lane Bridge is the result of the now defunct agency Yorkshire Forward, which was the regional development agency for the Yorkshire and Humber Region. It supported the development of business in the region by encouraging public and private investment in education, skills, environment and infrastructure. It was abolished on 31 March 2012 following the public spending review announced in 2010.

The original brief was to increase connectivity and the use of the city’s waterfront, to act as a catalyst for further regeneration and to create an ‘iconic’ landmark for Hull. The inclusion of the proposal in the City Plan was probably the most significant step in realising the project.

It set out from the very first to create a place to inhabit, to linger. The purpose was not just to get from A to B but to be a destination in itself. Not quite the Ponte Vecchio in Florence or the Old London Bridge but representing the same ideas – that a bridge is a place to meet, a place for trade. It has aspects of the seaside esplanade, tiered, south facing, wind sheltered with the offer of a coffee or an ice cream.

But as well as being a place it is an event. It has to open from time to time to allow river traffic through but it also opens twice a day for the sheer pleasure of it, and when it does it is a phenomenon. Uniquely, the public is allowed to be on the bridge as it rotates and step on and off from the Old Town end while it moves. The slow speed of rotation means that even wheelchair users and those with buggies and prams can easily access the bridge while it is moving. It is a very special thing with an installation of light and sound adding to the notion of a seaside pier.

And people are using it as a quicker way to work in the morning and as a place to show to and enjoy with friends and visitors.

Proposals to implement the bridge started to take root in the early 2000s as part of a large-scale regeneration project for the east bank fronting the river, known as ‘The Boom’.

A pedestrian bridge in the vicinity of Scale Lane, along with a number of other pedestrian bridge links straddling the River Hull, were first mooted in Terry Farrell and Partners’ River Hull Corridor Regeneration Masterplan prepared in 1999. These were intended to enhance connectivity and facilitate the regeneration of the east bank of the River Hull. These early aspirations were partially realised in 2002 when a new footbridge was constructed to serve The Deep, a marine aquarium project, 300 metres to the south of the Scale Lane Bridge.

The Boom project was shelved in the economic downturn of 2009 although a single multi-storey block containing a hotel and car park were completed on the east bank.

The bridge, however, was still seen as a critical piece of infrastructure to the regeneration of the east bank and the project was picked up by Hull City Build, the city’s then-Urban Regeneration Company.

So – what has Scale Lane Bridge achieved?
The design has certainly won a lot of awards, quite rightly because it is an extraordinary achievement. It has, as intended, become a destination and in doing so enlivened this area where the Old Town meets the river. It has created a memorable location, changed movement patterns, caused a modal shift in people’s journey to work, and further promoted the regeneration of the Old Town conservation area on the west bank of the river.

We were told that this part of town was a bit of a no-go area at night and that the bridge has changed the ecology of the space, encouraging new commercial investment. The graffiti is disappearing and the new landscaped area known as the Green Rooms forms an attractive link to the bridge.

Even in the late 1990’s, the Old Harbour area still experienced relatively high levels of dereliction and vacancy. Although the wharves and staiths were generally accessible to the public, pedestrian footfall was low and aspects of the area remained unenticing with issues of anti-social behaviour. The presence of the bridge has greatly increased footfall and enhanced the viability of nearby businesses and the attractions in the Old Town.

The bridge also contains a commercial unit, intended to serve as a restaurant/café unit within its structure. As yet this remains unlet, but the space has already been used for temporary events and should only serve to enhance the bridge’s role as a destination once occupied.

The River Hull forms a physical divide between east and west Hull. Although a friendly rivalry exists between the two halves of the city (this being mainly associated with the city’s two rugby league clubs), the bridge possesses a degree of symbolism in that it has reinforced links across the city.

The western approach to the bridge, which includes Scale Lane Staith, was previously a gap site and surface car park. This has now transformed into an attractive urban space also connecting with the boardwalk to the western side of the river. The design interface between the bridge and adjacent spaces has been executed seamlessly and detailed to a high standard.

We can ask ourselves to what extent the Scale Lane Bridge addresses the seven criteria that we apply in assessing a Great Place – leadership and governance, local character, amenity, commercial success and viability, environmental sustainability, community health and well-being and, lastly connectivity.

In terms of leadership and governance it certainly represents the determination of the authorities to achieve something significant in the face of adversity, the economic downturn and local scepticism of the value of the project. The bridge provides a distinctive sense of place. It is a destination in its own right which is entirely democratic and accessible to all.

This is certainly a safe and enticing place for people to visit and enjoy and the intervention has already encouraged new business and small-scale investments in the Old Town to the west with the consequent knock-on effects. Providing a new link for pedestrians and cyclists contributes to the sustainability, community health and well-being, and neighbourhood connectivity.

As Rowan Moore wrote in the Guardian in the month the bridge opened, “McDowell and Benedetti have at the very least created a good place to pass the time, while waiting for the mirage of regeneration to become real”.

Indeed, regeneration is now tangible with several new developments coming up in the area as a response to this optimistic intervention