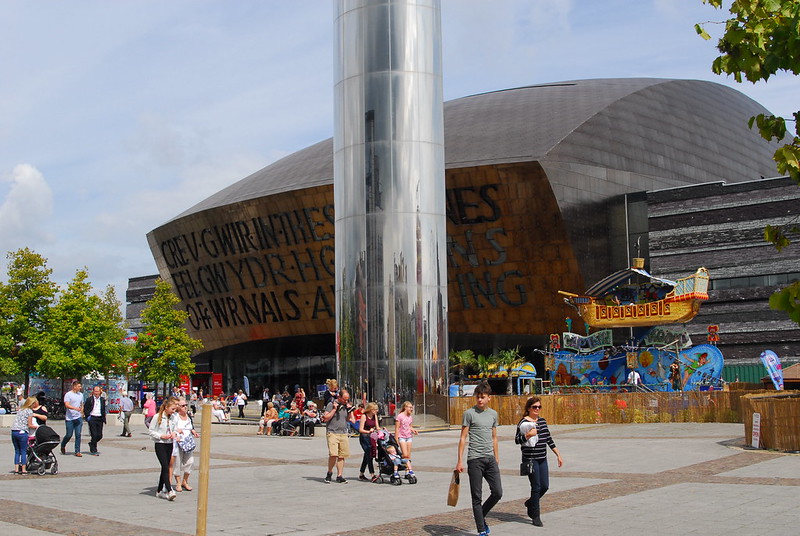 1. Make your early decisions count
The early vision of the Cardiff Bay Development Corporation through the 1980s and 1990s established ambition for the area’s regeneration and Cardiff Bay as a destination. They took the right steps early on. The decision to sink the relief road beneath Roald Dahl Plass showed foresight, allowing the city to be reunited with its waterfront and creating a high quality pedestrian environment.

2. Design to fit your context
The Cardiff Bay barrage enabled the visitor-potential of the area to be realised. The project in turn has provided a unique and impressive waterfront setting befitting of a seat of government and national institutions. Cardiff only became a capital city relatively recently and Roald Dahl Plass has defined the ambition that goes with this, through the creation of a national gathering place with a plethora of opportunities for leisure and relaxation. It also offers a large, multi-purpose urban civic space that was previously absent in Cardiff.

3. Balance democratic and commercial success
Roald Dahl Plass is highly democratic. It is managed by the city council for the people and the nation. Yet Cardiff has also been commercial in its approach, this resulting in a sustainable operation of the space which both animates and continues to contribute significantly to its development as a place. There are a high number of event days per annum but on non-event days space is always available for informal public uses.

4. Invest in animation
The events management and flexibility of Roald Dahl Plass, particularly the range and turnover of activities, is impressive, with considerable ingenuity shown by the council’s events team in adapting the space to meet particular requirements. Reusable temporary infrastructure owned by the council assists staging and management. However, the assessment team did query whether the nature of some of the events may limit the development of further residential uses in the vicinity.

5. Encourage use through better connectivity
Despite the nature of the place being highly inclusive and accessible, the area still feels detached and remote from Cardiff city centre, nor does it appear to be strongly promoted, or even known about, as part of the city centre offer. Measures to improve the connectivity of the area, particularly as part of a light rail system for the city and enhancements to active travel links, could further allow the area to flourish in the longer term. The linkages between the space and the Butetown area to the west could also be strengthened and this may further assist with its ongoing regeneration.

‘In these stones horizons sing’, is the inscription on the Wales Millennium Centre that looms over Roald Dahl Plass. Those words by Welsh poet Gwynneth Lewis could be interpreted on different levels, but it is perhaps an affirmation of the history that underpins the former Cardiff docks and a reference to the optimistic new dawn for the Cardiff Bay area.

Situated next to Cardiff Bay, the Roald Dahl Plass now forms a new focal point between the historic Butetown, the centre of ‘Tiger Bay’ to the west, with the Wales Millennium Centre, Welsh Senedd and Pierhead Building rising boldly to the east.

The former oval basin to Bute West Dock was opened as public plaza in 2000. The space was designed by Nicolas Hare Architects and formally named as such in 2002 in celebration of one of Cardiff’s famous sons. Roald Dahl also had close family connections with Cardiff Bay and worshipped at the Norwegian church, now re-erected a short distance to the south of the Plass. The largely infilled basin and its elliptical form are now defined through a series of illuminated pillars, this being punctuated by the imposing Water Tower sculpture situated at its northern entrance.

A thriving coal port through the 19th and much of the 20th centuries, the docklands had fallen into terminal decline by the 1970s. Roald Dahl Plass owes much of its legacy to the vision of the Cardiff Bay Development Corporation, which acted as a major driver for the area’s regeneration and unlocking potential for new leisure, residential and employment opportunities. The corporation took some important early steps, promoting the tunnelling of the docklands relief road beneath the Roald Dahl Plass, which now allows the area to function as a pedestrian space with all but essential traffic excluded. They also oversaw the relocation of the Welsh Industrial and Maritime Museum from the former basin to Swansea, but, most significantly, the barraging of Cardiff Bay during the 1990s addressed the unattractive industrial legacy of the polluted mudflats. In turn, the barrage and resulting freshwater lake has formed a magnificent natural resource which now serves as a destination of which Roald Dahl Plass forms the linchpin.

The competing architectural styles of the large public buildings that frame the Plass offer a unique and vivid backdrop. Yet the historic remnants of the dock basin and red brick of the imposing Pierhead Building firmly root the location with its past. Many references are made throughout the Plass to the rich history of Tiger Bay – from its function as a port for Welsh coal exports to destinations across the globe and as a start point for Captain Scott’s fateful expedition to the Antarctic. The Celtic Rings sculpture also serves as an end point for the Taff Trail – a 60-mile walking route leading from the Brecon Beacons.

Cardiff only became a capital city relatively recently and Roald Dahl Plass has defined the ambition that goes with that, through the creation of a national gathering place, not only for the city but for also for Wales, most importantly as a new seat of government. But this almost seems secondary to its primary role as a venue for culture, leisure and relaxation. From concerts at the Wales Millennium Centre to pleasure boat trips across the bay and the numerous food and drink venues at Mermaid Quay, the location can be experienced on a wide range of levels. The residential population in the area is slowly increasing, as are employment uses, which now include production facilities for BBC Wales. However, to-date large-scale retail development has not emerged.

The nature of the space is highly accessible, with levels being gently graded towards the water’s edge. This not only allows for the extents of the former basin to be visually articulated but enables easy passage through the space without the need for lifts or ramps. Although the surface finish of the space is unremarkable, this offers considerable flexibility to the events which can take place. The Plass sees an intensive and varied programme of events management provided by the Cardiff Council Events team, with the space occupied most weekends from May to October. This range of events on offer acts as a major draw with the Plass providing a venue for celebration, commemoration and even protest. Whether the ways in which the Plass would eventually be used were fully understood at the time it was conceived are not known, but Council’s subsequent role in managing the space to harness its full potential is impressive.

At the time of the assessment visit, much of the space was laid out as an urban beach and funfair for the summer holidays. This gave a wonderful impression of a fun, slightly quirky and bustling place. However, the assessors would also have been curious to observe and understand the place at quieter times, particularly with no event is taking place. One would expect a very different air to prevail allowing greater attention to be drawn to its spatial qualities, the surrounding buildings and distant views across the Bay to the Bristol Channel.

Whilst the nature of the Plass is highly inclusive and accessible, the location does feel detached and remote from the city centre, nor does it seem to be strongly promoted as part of the wider city centre offer. Although connected by bus services, a basic rail shuttle to Cardiff Queen Street and the grand boulevard of David Lloyd George Way, as yet the treatment of the northern end of this route does not convey such a sense of destination. Measures to improve the connectivity of the area, particularly as part of a light rail system for the city and enhancements to active travel links could further allow the area to flourish in the longer term.

During our time in Cardiff, we heard a view that the basin should perhaps have been retained as a water feature instead of being infilled. Whilst such an approach would have been perfectly valid, it is unlikely this would have achieved a place which enjoys the same level of usability and success that has emerged today.

Roald Dahl Plass is noteworthy for the vivid sense of place which has been created, particularly the approach to management and the notion that a new place must be nurtured if it is to succeed. It must also be commended for its inclusiveness, its informality and vibrancy in a modern, highly unique urban setting.