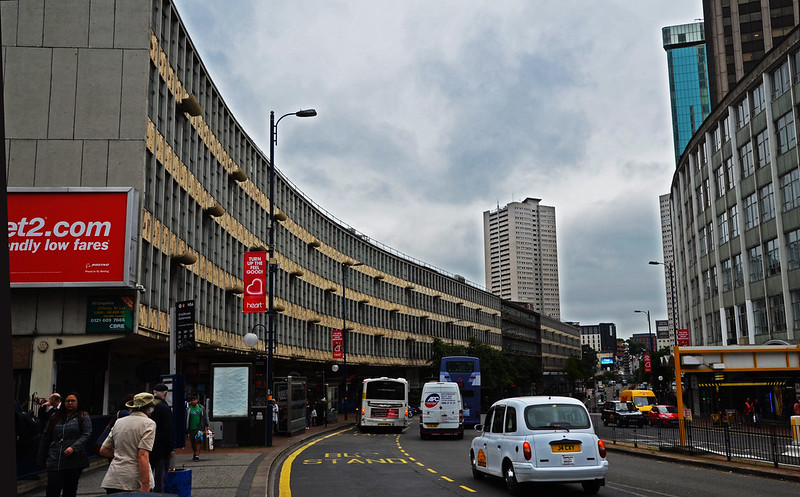 2. A 1960’s concept can still be relevant for the future
The dramatic curved boulevard still has a power in urban terms. The next five years will demonstrate if this concept is strong enough to absorb all the planned changes in social, vehicle and shopping patterns.

3. The cross streets generate the great street’s success
At Hurst and Hill Street there were big changes in 1993, with more planned in the next four years. This connection with Grand Central train station will prove crucial as the street develops. The city council should be encouraging the private schemes here to come forward.

4. Small street changes can reduced vehicle traffic significantly
The traffic management designs of recent years have been about breaking Birmingham’s ring of concrete. This street shows which intelligent redesign can achieve given sufficient rigour in the design.

This street is a significant example of bold post-war planning. The design has undergone major changes since completion in 1960 and the assessors were told the future plans for this street. The BID had commissioned graphic artist Hunt Emerson to produce an infographic of the street’s history, which was very clear.

The city’s 2010 Big City Plan has a vision for Smallbrook Queensway within the Southside Business Improvement District’s plans. The street acts as a backbone to the surrounding neighbourhoods with Chinatown, the Gay Village and Theatreland being well integrated. The relationship between the BID and the planning department will be crucial in the continuing improvements.

The sense of place is very distinctive and the ambition of the curving plan and the 1960’s buildings are impressive. It is part of the infrastructure for the city’s retail and wholesale markets, which created a lower rent fringe area, enabling Chinatown and Gay Village to prosper. The original concept of the ring road was a boulevard for pedestrians rather than an urban expressway. Queensway is the only part of the ring road that was completed to this vision. In 1998, a Chinese pagoda was erected in Holloway Circus along with a Chinese Garden, which emphasises the multicultural nature of the street.

This wide street is well-connected for pedestrians, buses and taxis. The shops and bars are well used but empty units exist whilst the redevelopment starts creating gaps in the streetscape. Adjacent streets are lively and well used. The New Street station is a significant amenity and influence. Nott Architects are working with the Commercial Estates Group to regenerate the Ringway building. This creates a massive change in the street and it is too soon to judge the success of this. The assessors wondered about the impact of the 22-storey tower on light and shadow on the street.

The three key tenants are Nostalgia and Comics, Fair Deal Music Instruments and Snobs nightclub. How these businesses intersect is fascinating and it is these who are generating the footfall whilst redevelopment is in progress. The total changeover will have to be carefully managed to ensure that continuity of businesses is not lost.

Alkins are working with Southside BID to trial sustainable ideas such as a Green Wall as a carbon trap, urban parklets and flat roof greening. The level of ambition is admirable. The target for the greatest environmental benefit is the reduction of vehicles on the street. Hurst Street has been blocked and reduction of traffic is considerable. Queensway is now mainly used for drop off at the train station and an unofficial nighttime taxi rank near Snobs nightclub. A further reduction of traffic on Smallbrook Queensway would offer an opportunity to regain the 1960’s vision of a tree-lined boulevard with many environmental benefits. In 1993 the much-disliked subway was removed where Hurst Street and Hill Street cross Queensway. This was a major piece of civil engineering that strengthened the north-south crossing by bringing it to the open air. However 25 years later, the hard landscape is showing its age and the steps and railings seem to restrict pedestrian flows.

The street promotes civic behaviour, health, wellbeing and social cohesion in many ways. The vitality and diversity of the area is expressed by festivals such as Chinese Festivals, Birmingham Pride, St. Patricks Day and the Flat Pack Cinema Festival. The LGBT centre at Holloway Circus provides the UK’s largest range of target community and health services for 80 hours a week. The street is wide and well lit and successfully mixes daytime and nighttime activities. This is supported by Pubwatch, ‘Good Night Out’ and the presence of street wardens.

Walking routes are clear, safe and mostly well signposted, with the open vistas of the street making a clear line of site. The needs of people with physical, cognitive and sensory disabilities and of different ages are well accommodated in the paving but there are improvements to be made. Two cycle paths cross the street at Hurst Street as part of the ‘Cycle Revolution’ initiative, which helps the connectivity. Taxis are plentiful day and night although the queuing system to the new Grand Central encourages excessive engine running. The main bus routes have been removed as part of these changes and the success of the change is too soon to be assessed. The street has always been well connected and the steps to improve the connected boulevard using a Local Growth fund are a great start.

This street was ambitious and forward thinking when works completed in 1960. The removal of the subway in 1993 was welcomed at the time as a major contribution to user comfort, accessibility and public realm. The next four years of recladding, tower building and public realm improvements offer a fantastic opportunity to plan ahead another 50 years and beyond.

The assessors appreciated all the work done by the planners and the BID to bring these radical changes to this stage. It seems that a powerful design statement of post war street planning can still be relevant to changing lifestyles, technology and aspirations, which is commendable. However, we felt that this assessment may be a little early. When the changes are executed it would be an exciting time to see how the street remains and thrives.