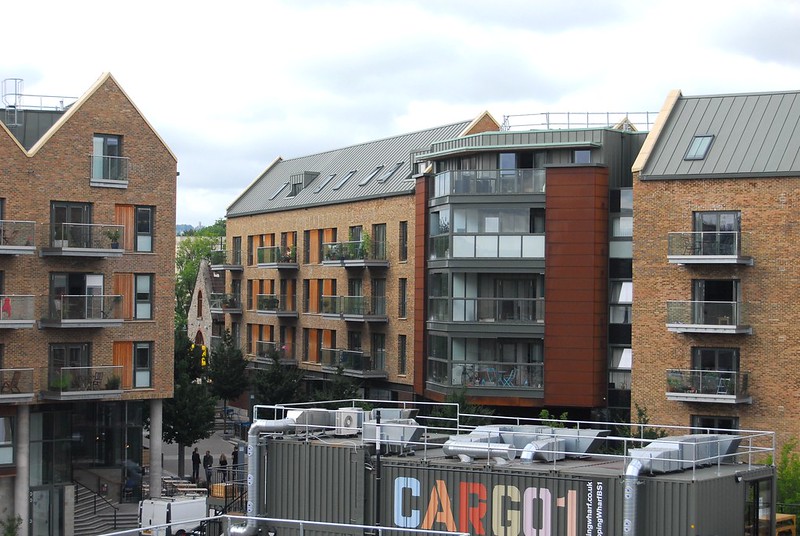 1. The right client / developer
The right client / developer is key in matching planning expectations and a successful scheme. Here we have a client developer who is a small family business, with no corporate shareholders and who was looking for independent retailers and businesses as tenants, plus a mix of residential tenures (a dream ticket). The developer has retained ownership of commercial floorspace and public realm thus providing a high degree of control through management.

2. Context is a big deal
High quality architecture has acknowledged the city grain and adopted a sensitive use of materials that sympathetically respond to the site’s industrial heritage and dockside aesthetic. Getting a sensitive, locally-grounded architectural practice means that the scheme has been executed with some style and understanding of the context.

3. Get connected
The Gaol Ferry Steps provides a seamless north to south pedestrian connection that links the harbour to Bedminster and Southville. Building a street/place around a natural route ensures a key ingredient for commercial, success and footfall.

4. Make it easier for independent local businesses
The focus on local businesses utilising the retail units over national tenants demonstrates how developers can encourage local economies with “easy in; easy out” five-year leases.

5. Keep it animated
The use of shipping containers with ‘meanwhile uses’ for commercial start-ups has added to the vitality of the area, and filled what could have been an ugly gap. This intervention has also helped initiate the second phase of the development.

Like many historic ports, Bristol docks declined from the late 1960s, at which time the Floating Harbour, lying directly to the north of the site was almost infilled to create a new relief road. But local pressure successfully campaigned against this and Bristol docks have been the focus for ongoing regeneration for the past 35 years.

Historically, Wapping Wharf was the location of Bristol’s Victorian gaol – a prison – before serving as a goods yard for the Great Western Railway until dereliction eventually took over. The Gaol Ferry name stems from the ferry that used to take people across the River Avon from Wapping Wharf to Southville. A replacement bridge (Gaol Ferry Bridge) was completed in 1935. Its redevelopment has had a long gestation period. Bristol City Council first identified the site for redevelopment in 1998 as part of the Bristol Harbourside Regeneration Brief, which informed early master planning. The developer, Umberslade, acquired the site in 2003 and were granted outline planning permission in 2006. Beset by the economic downturn of 2007 and difficulties in securing funding, the site was operated as a car park before the project finally came to fruition following a loan from the Homes and Communities Agency to provide assistance for stalled sites.

This new scheme features two distinct elements – the initial phase of a mixed tenure, flatted residential development with ground floor commercial uses, and now a temporary village of repurposed shipping containers on part of the site allocated for future phases of development.

The design approach has been developed by Alec French Architects – a locally based architectural practice which has executed the scheme with style and understanding of the context. The development is of a human scale with sensitively massed blocks topped out with a busy roofscape as would be typical for an historic dockside setting, this carefully concealing photo-voltaic panels. The materials palette with its mellow brick and Corten steel achieves warmth yet acknowledges the area’s industrial origins. The walls of the former gaol have been carefully re-incorporated in to the design, with the listed gatehouse due to be restored as part of the second phase. Phase 1 has also incorporated a plant room that will eventually serve the whole site with Combined Heat and Power (CHP) to all units.

The spatial character for the site has been defined by the buildings to create a tight street geometry and intimate spaces, not unreminiscent of the nearby Christmas Steps and the ambience of historic Bristol. This contrasts with other recent harbourside schemes where public realm has been laid out in advance of development, producing a very different character.

The residential properties feature a range of spaces including balconies, winter gardens and terracing. Whilst not unattractive, the communal entrances and rear courtyard areas were felt to have been conceived as circulation space rather than spaces to inhabit. The assessment team also considered that the four-storey scale of development and the relative tightness of the courtyards could restrict daylight penetration during the winter months.

A key ingredient for the early success of the development has undoubtedly been the design response to the desire line through the site, which has generated significant footfall. The new pedestrian route now connects the Gaol Ferry Bridge to the south with the new Museum Square and dockside to the north. Some of the assessment team felt this area had a slightly unfinished feel but the retention of the former dockside cranes and the working dockside railway complete with passing steam engines create vitality and distinctiveness. It was also felt that in the longer term, a further bridge link across the harbour could greatly enhance connectivity from the site to Canons Marsh, Harbourside and Millennium Square to the north. However, the public realm detail of the steps was felt to be robust and well detailed, enhanced by the concealment of car parking beneath the development. Interestingly, the street spaces have not been subject to adoption by the council, which has allowed the developer to retain a high degree of control and influence.

What is perhaps most striking about this place, is the complete absence of the usual national chain coffee shops, pubs, restaurants and convenience stores. Rather than selling the commercial floorspace on completion, the owner has retained ownership and decided to let every retail unit to local independent retailers. This now includes a wholefood supermarket, coffee shops and micro brewpub.

The container village Cargo forms a further dimension, appropriate for the dockside setting. It has been conceived as a temporary meanwhile use and comprises some 40 businesses ranging from florist, barbers, wine merchant, cycle store to several restaurants, one of which, despite having only 14 seats, we understand is receiving the attention of some famous critics. Although intended as a short-term intervention, it has acted as a magnet and established momentum, greatly contributing to the success to date of both the development and place. The developer has harnessed young, entrepreneurial spirit – minimising risk by offering short leases that can be handed back on a three-month notice period. The assessment team wondered, given its early success and the level of investment made, if this may become so established that it becomes a more permanent fixture. With its quirkiness and contrasting scale to the main part of the scheme, this may cement the identity of the place as whole.

Gaol Ferry Steps has clearly become successful in a short space of time – residential properties were all sold on completion (including a PRS block to Sovereign Housing and affordable housing to Knightstone Housing) and commercial space is fully let, with a long waiting list. The early signs are hugely positive, particularly the speed with which a community has been established, its commercial success and the vitality and vibrancy which has been realised. But it is still a place in its embryonic stages. The wider site will remain in flux for several more years and scheme is still lacking the benefits that will come from completing the wider project. Until concluded it may be premature to pass final judgement, but, if the development can build upon its early successes and learn lessons from the first phase, it can certainly look forward to a bright future.

As a development project, some elements perhaps seem unremarkable, but the funding model and the vision and commitment of the developer has certainly challenged conventions. For this, it should receive particular acclaim for breaking the mould and offering an alternative to cloned places that have too often become the default in UK urban regeneration.