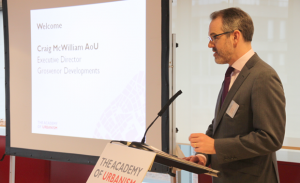 taking place at Grosvenor’s London offices, was overbooked well in advance; clearly the topic stirs a great deal of interest, ideas, controversy and passion. And yet the idea of the garden city has its origins in the 19th century, first described by Ebenezer Howard in his self-published book of the same name. Since then the idea has gone around the world and back, generating different associations for people at different points in history. Partly this has to do with the diverse tendencies combined in the concept itself – anarchistic, socialistic, and conservative.

But, as our chair for the evening, David Lock 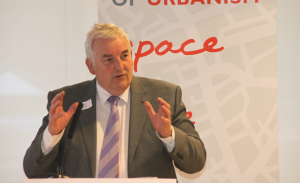 (CBE AoU), stressed in his introduction, the renewed interest in Garden Cities today seems to be more than a passing fashion, as has sometimes been the case. With a housing crisis plain for all to see, today the idea is being openly discussed at a governmental level, at least in the UK. However, as Craig McWilliam (AoU), Executive Director for London at Grosvenor (above), posed the question before the debate kicked off, we have to ask: what does government use of the term mean given that development today is effectively delegated to the private sector? What does a 21st century approach to the Garden City look like?

Our first panelist was Kate Henderson, 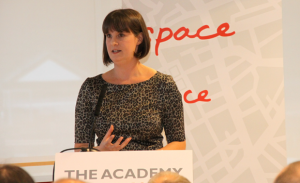 Chief Executive of the Town and Country Planning Association (TCPA), and a self-avowed partisan of the Garden City. Kate started by laying out the scale of contemporary challenges: 1.7 million families – around 4.5 million people – with no access to affordable housing, an ageing population, and on top of these national conditions, all the added complexities of globalisation and climate change.

Kate stressed that garden cities should be a part of the solution, rather than a magic bullet all by themselves. But her arguments for the urgency of the garden city model were clear: in the first place the demand for new housing simply cannot be met on a plot by plot basis, due to the scale of demand and the limited availability of brownfield sites. On the other hand garden cities present a major opportunity – for economic growth if properly underwritten, and for creating places properly equipped in terms of both services and character, rather than yet another bolt-on estate. Fundamentally garden cities are about access to beautiful spaces for everyone.

Kate closed by welcoming the incorporation of Garden Cities into the discussion framed by the NPPF and suggested we take a long view, looking to examples of the past like post-war new towns, and to the future, considering planning not just in terms of the present moment but where we’ll be in 30 years time. 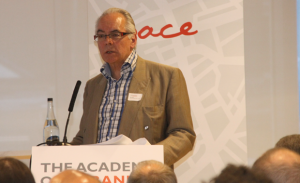 John Best Re.Generation, our second speaker, stated from the outset that he would approach the issue from his experience as a town planner, particularly in Milton Keynes. John framed his advocacy of garden cities in terms of four stages in the development of Milton Keynes, which represent four different aspects of the garden city, spread over time in an unfolding elaboration:

1. The original idea of garden cities – and the prehistory of Milton Keynes – is to be found in late 19th century reformist tendencies. This idea was about comprehensive placemaking achieved via public ownership, creating green spaces on a human scale. The original garden city therefore directly counter-posed itself to the conurbation, i.e. dense, continuous urban spaces.

2. A second stage of development is seen with the postwar new towns, representing the period when Milton Keynes was built. These are no longer opposed to the metropolis but rather complementary to it. They are also designed for the new age of the car, and with it the flow of people out of cities and into the suburbs.

3. A third stage is represented by Milton Keynes in its current state. According to John this stage overlooks a period of 21st century degeneration and a return to inequalities reminiscent of the 19th century. Statistics show that people in poor areas of Milton Keynes die 12 years earlier than people in richer areas. Less dramatically, dropping speed regulations has made neighborhoods less legible.

4. The final stage that John outlined is situated in the future. As cities reach a critical mass in terms of population and complexity, a whole new range of needs are being thrown up; we need to build new facilities in order to meet these needs. For John the garden city is a way of doing this. It therefore becomes relevant once again. 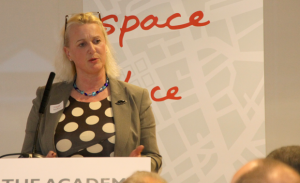 at Crest Nicholson Regeneration, was our third speaker of the night. Debbie outlined both the positive and problematic aspects of the garden city, leading to a more flexible interpretation of the model. At a basic level, reintroducing the idea of the garden city is positive because it stresses quality of design. However we have to recognize that no single developer can possibly take on a project as large as Milton Keynes.

Renewed interest in garden cities is also positive because it brings the issue of community to the top of the agenda. But again the benefits go hand in hand with the challenges: here that challenge is how to get people to buy into the idea. This is especially the case when Local Authorities won’t see results during their own terms of leadership. Essentially, building garden cities means building for our children. The key question therefore, is how do they want to live?

In response to these challenges Debbie suggested our approach to garden cities should be innovative, flexible and mixed. Since we know from research that garden cities meet many of people’s aspirations in terms of where they’d like to live, we should aim to bring the qualities of the garden city into existing metropolises. She cited as an example Brighton’s rooftop allotments.

Perhaps most importantly, especially in light of questions raised at the end of the evening during the Q&A, Debbie’s suggested approach involves a similarly flexible approach to land ownership, with developers purchasing, assembling and patching together different parcels of privately owned land. 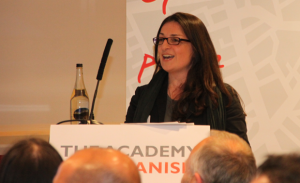 consultancy, Social Life, was our fourth and final speaker. Saffron’s interest in garden cities stems from her interest in social anthropology, i.e. the social life of communities.

Somewhat differently to the others on the panel, Saffron argued that the garden city was originally a radical idea. The impact of Ebenezar Howard’s ideas have been felt most strongly in contexts that resonate with this radicalism, for example in Soviet Russia. What is curious about the present context is the way this radical idea is being embraced by conservative politicians.

Echoing Debbie Aplin’s comment on the intuitive popularity of garden cities, Saffron related her own experience of working with Bethnal green residents: dialogue with the community often arrived at the same kind of ideas underlying the garden city. Saffron argued that the garden city is therefore not a concept about design as such, but fundamentally a social one.

In this respect it is highly elastic, a point demonstrated by garden cities being planned in China which include massive skyscrapers. But the elasticity of the idea means that it is vulnerable to distortion; we risk losing its social essence. Similarly there is a danger that a change of government will mean the idea will simply go out of fashion.

Saffron therefore questioned whether we really need the garden city model in order to refocus on community centred design and planning – if that is the most fundamental issue.

Not surprisingly the Q&A was full of lively responses to four very interesting and provocative takes on the garden city theme. The discussion centered broadly around three points of contention: the role of technology; land ownership issues; and the importance of a community-centred, social approach to planning.

Clearly technology has undergone a revolution since Ebenezer Howard’s day, but what about society? Concerning the first point several people from the floor suggested that if the garden city model is to be relevant today, it needs rebooting for the digital age; an age where populations are that much more massive and yet have the possibility of rapid communication between geographically dispersed areas.

On the question of land ownership, there was a general recognition that the way things are today is problematic to say the least, but very different, possibly irreconcilable solutions were put forward: from communal land ownership to encouraging private landowners to take responsibility for new schemes.

Finally several speakers and audience members alike stressed that the most important point raised by the debate, and the most powerfully suggestive aspect of garden cities, is the need to refocus on the real lived experience of place. This would involve a major cultural shift in the planning process. It would also involve recognizing that getting the social questions right, like access to health and other basic rights, is the premise for high quality placemaking.

The Academy would like to thank Grosvenor for hosting this debate.