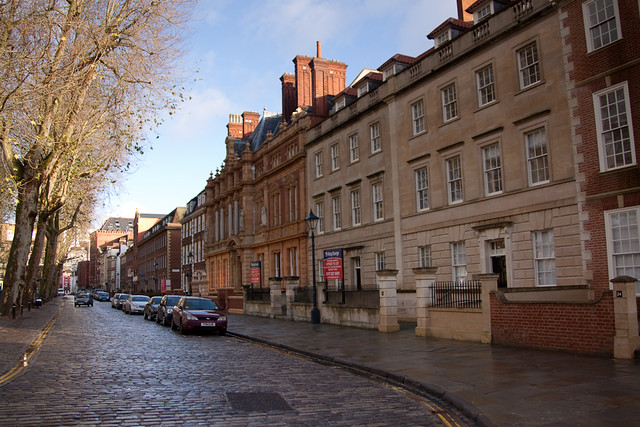 1. Although the transformation of Queen Square has resulted in a magnificent public space, there is much opportunity to further develop the underutilized spaces surrounding the square

2. The redevelopment of Queen Square over the past two decades reflects the changing economic and social conditions of city living that has seen pedestrian movement re-established to create a successful public space with the capacity to adapt to different needs and expectations of the local community

3. Due to the occupation of the aesthetically pleasing Georgian style townhouses by commercial enterprises, the square is conducive to hosting events and festivals without disrupting residential tenants, making it a vibrant public space

4. Queen Square has a distinctive sense of place, and the city council is emphasizing the importance of high quality management and maintenance of the square, seeking to respect both the people and the ecology

5. The prioritization of pedestrian traffic in the square has resulted in a more sustainable environment that has contributed to the stable and efficient use and occupation of the buildings – as well as the constant daily use of the square, which has further contributed to the social, cultural and economic compatibility between the different users and their needs.

Queen Square (named after Queen Anne) is an impressive Georgian square, claimed to be one of the largest of its type in Europe and the first residential square to be developed in England outside London. The square was built between 1699 and 1720 on the old town marsh as houses for the city’s merchants, providing a direct relationship between the merchants’ houses and their business on the surrounding quaysides and the Square has reflected the growth and changes of the city ever since. It occupies 2.4 hectares with lawns and wide gravel paths, a statue of King William III (grade-I listed) at the centre and a perimeter of mature plane trees. It is now home to around 70 businesses and in addition to its constant daily use an estimated 40,000 people attended organised formal events in the Square last year.

The space is a splendid example of a historic square restored to its former glory, the trees (magnificent) and the architecture (glorious) combine to provide a welcoming atmosphere aided by the now much reduced traffic flow. Great care has been taken with materials and detailing to ensure that the restoration scheme is historically appropriate and built to the highest quality. The economic success of the scheme is reflected in the current 100% occupation of all the buildings at rentals 16% above average, compared with an average 33% vacancy level in the 1990’s.

The space has benefited in the recent past from Bristol City Council’s very clear and singular vision, published in 1990, that resulted in the removal of the inner ring road from the square. The road was driven right through the square in 1936 and finally closed in 1992. The removal of the dual carriageway was the most crucial part of the regeneration scheme which was fiercely opposed by many in the city. It took 20 years from the publication of the original concept to completion. The associated regeneration of the space included not only the restoration of the historic landscape of the main square but also the creation of entirely new urban spaces where there had previously been just roads in Thunderbolt Square and Bell Lane. It also helped to build a case for the Brunel Mile and the key pedestrian link of Pero’s Bridge which is central to the Harbourside’s success.

The current vision for Queen Square is centred on the management and maintenance of the public space, overlooked by the commercial residents (occasionally used for public events). The City council has a committed revenue fund to maintain the space and manage the events. The ‘residents’ are represented by the Queen Square Association which provides a conduit for the Council and event planners to communicate and consult with the local community. This vision is focussed on the ‘inside’ of the square without looking beyond the perimeter. There is an opportunity to use the space as a catalyst to regenerate adjacent neglected spaces and streets, particularly on and around Welsh Back and The Grove. Perhaps two new pedestrian bridges across the water to the east and south would provide the movement and permeability that is currently lacking on these two streets? There is a plan for improving pedestrian links with St Mary Redcliffe and Temple Meads Station by way of the provision of green pedestrian corridors alongside existing vehicular routes.

Queen Square is not only providing a significant and sustainable economic benefit by providing high quality commercial accommodation but is also providing for a large number of events that enriches the cultural diversity of the city. The Bristol City Design Group consider it would be useful to carry out research into the economic impact of the Queen Square regeneration and its contribution to cultural life of the city.