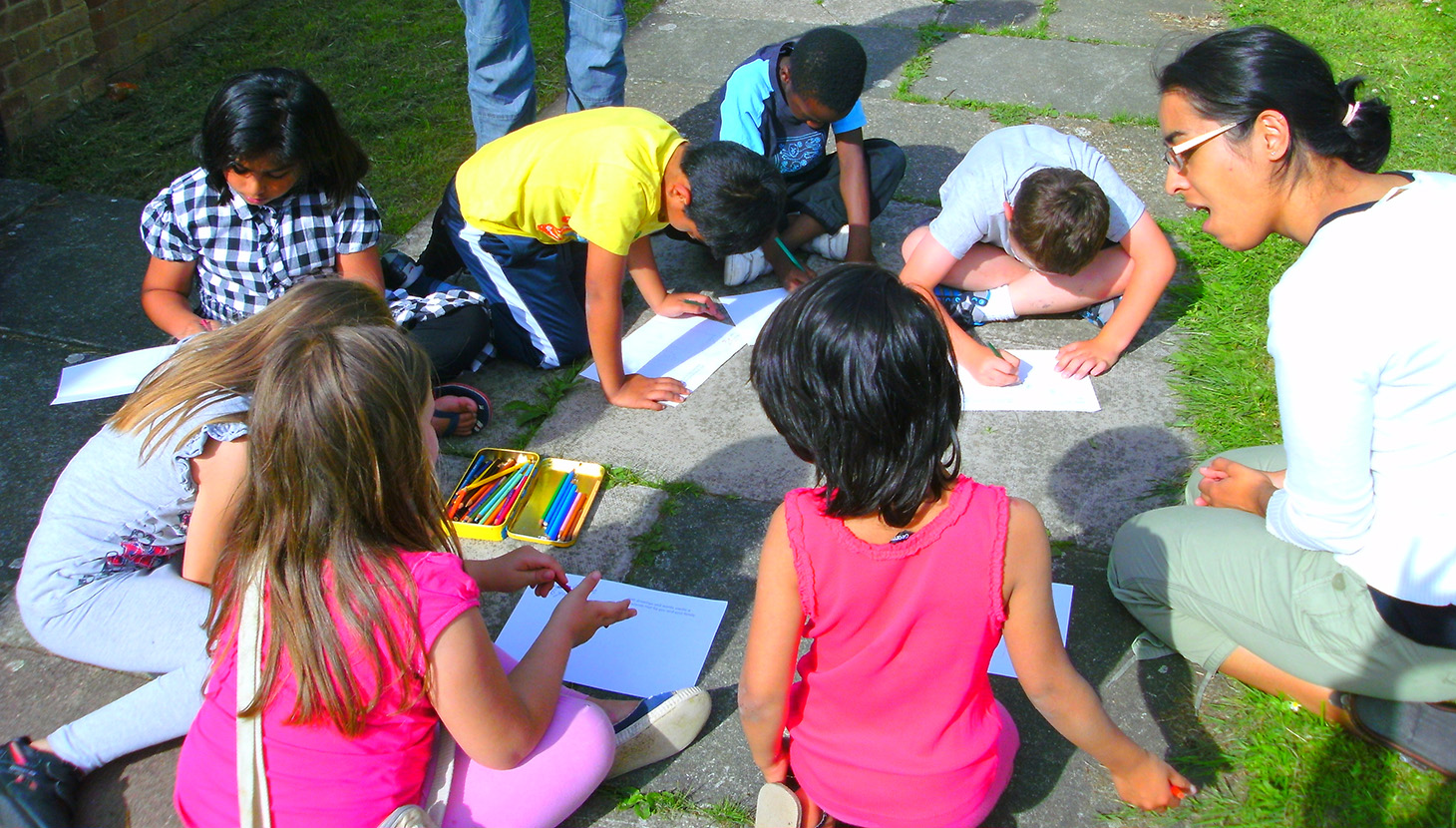 Children participating in a research workshop. Access was provided by the PVRA and Regenerate’s ‘Karabiner Club’, who enable community development projects.

Deriving from Old English, the word ‘stewardship’ had ecclesiastical significance: the responsible use and protection of resources. Despite the meaning evolving over time, a sense responsibility and protection still resonates today, particularly in the context of placemaking and community ownership whether it be valuing the assets of people and spaces or engaging with people through empathy.

A few years ago I was privileged to come across Putney Vale Estate whereby through sustainable architects Cave Co-operative (who champion and practice community participation, up-skilling and ownership) I worked with residents and community organisations through part of their design process as part of my MA thesis.
The diagnosis

A geographically and physically isolated area, Putney Vale is a small housing estate located in Roehampton Vale. With fewer than five hundred households, the dwellings are a mix of privately and council owned flats, maisonettes and semi- detached houses. The residents are a varied mix of European, Asian and African communities, including residents over the age of sixty, families with children under the age of five, a large percentage of Polish migrants and families, and numerous Pakistani and Somali families.

Existing reports highlighted various social issues associated with the estate, which included anti-social behaviour, a divide between residents of different age and ethnic groups and a loss of community spirit alongside a lack of community cohesion and a need for more community activities. Further to this two community buildings, Newlands Hall and Stag House, faced permanent closure, which resulted in residents campaigning to regain possession (seventy per cent signed a petition). A decision to dispose of the derelict Newlands Hall was overturned and the building was obtained from the local authority through an asset transfer.

Built in the 1950s, with the purpose of being a community hall, Newlands Hall has continuously been managed by residents and, throughout its history, it has served the community by providing various social, wellbeing and educational activities. The existence and possible closure of the community buildings and social activities showed both the social and environmental impact that this had on the wider community and the smaller communities that exist within Putney Vale Estate.

In 2010 a community consultation listening event took place where residents were asked to write about the things that were good, could be improved and would like to be seen on the estate. The most referred to positive elements were that the estate is peaceful and quiet, has access to various open spaces, and has a community feel, which made it apparent that, for a community to be sustainable, balance and harmony was needed between individual and collective needs (cognitive, emotional and physical) and design.
  
The discovery
Over a period of a few months, field research was carried out using various passive engagement tools, which were deliberately limited to the estate and its residents. Initially this was to discover what residents wanted the derelict building to be used for however the approach of connecting and empathising with people assisted in providing other insights, such as: the perspective of different age and ethnic groups about place; an understanding of both the actual and perceived social issues and causes of them; both the needs and wants of residents as individuals and a collective; and existing and hidden community assets of spaces and people.

A warm welcome by the community was enabled by talking and listening to residents, attending community events and running engagement activities on a weekly basis. The engagement techniques ranged from conversation with residents, participants drawing and writing, and field observation and photography. Each tool was sensitively modified to each context (some of which were successful and others not) in order to capture and extract information to inform the design research project.

Throughout the design journey a great deal was unravelled about the context, in particular what people value about place alongside which assets exists and which potential ones can be uncovered. Although not every resident felt their community was where they lived, one thing was common amongst every resident and visitor to Putney Vale: a sense of community value and responsibility with people tapping in to their local resources and valuing the skills and knowledge of different people from different walks of life.

As a visitor to the estate, it was apparent that the reopening of the community hall could positively re-enable, nurture and sustain stewardship of the building as well as the valued social spaces and green spaces. The younger generation proved to be instinctive stewards when, for one particular workshop, a site visit to Newlands Hall was carried out. This activity enabled the children to look at the building, peek through the locked windows and doors, and think about the surrounding green spaces, especially as many of them did not recognise the name of the building, were not aware the building was there or had seen the building but not associated the name with it.

As part of the activity, the group was asked to draw, write and talk about what they would like to see inside and outside the space, specifically things that made them and their family feel safe. The use of simple tools, mainly paper and colouring pencils, enabled the children to communicate their wishes for playful and sociable spaces and activities (such as gardens and play areas, dancing, singing and music, and sports and clubs), which additionally assisted the Residents’ Association to design a refurbished building, redevelop green spaces and plan for future activities.
  
Reflections
Throughout the project it was essential to tap in to existing community structures and networks. Despite it being difficult at times to access and engage with less visible residents, time and opportunity will eventually enable people to surface everyday to inclusively provide people with a voice about the spaces and networks that they perceive as their community.

The project was, and still is an example of community leadership, responsibility and ownership, with residents and organisations working together to create solutions alongside save and share their local assets and resources; not just physical buildings and spaces but also people. It also invaluably showed how different people perceive ‘community’ and community assets alongside the impacts of how a place can both instigate and inhibit social interaction, stewardship and intergenerational value. Reminiscing about the past, having conversations in the present and capturing visions of the future all served as a reminder of what a sense of community, stewardship and placeshaping is at Putney Vale and what it can be in other places.

The design and research process (as an individual, designer and member of a community) also enabled opportunities to explore and consider how empathy can enable and steward engagement, participation and leadership in design projects, particularly placemaking ones. In the words of    playwright and feminist Rita Mae Brown: “Language is the road map to a culture. It tells you where its people come from and where they are going.” This certainly rang true in this instance: open communication and interaction, through whichever senses, provided collective learning, participation and ownership.

Melissa Lacide is a Young Urbanist and represents The Empathy Collective