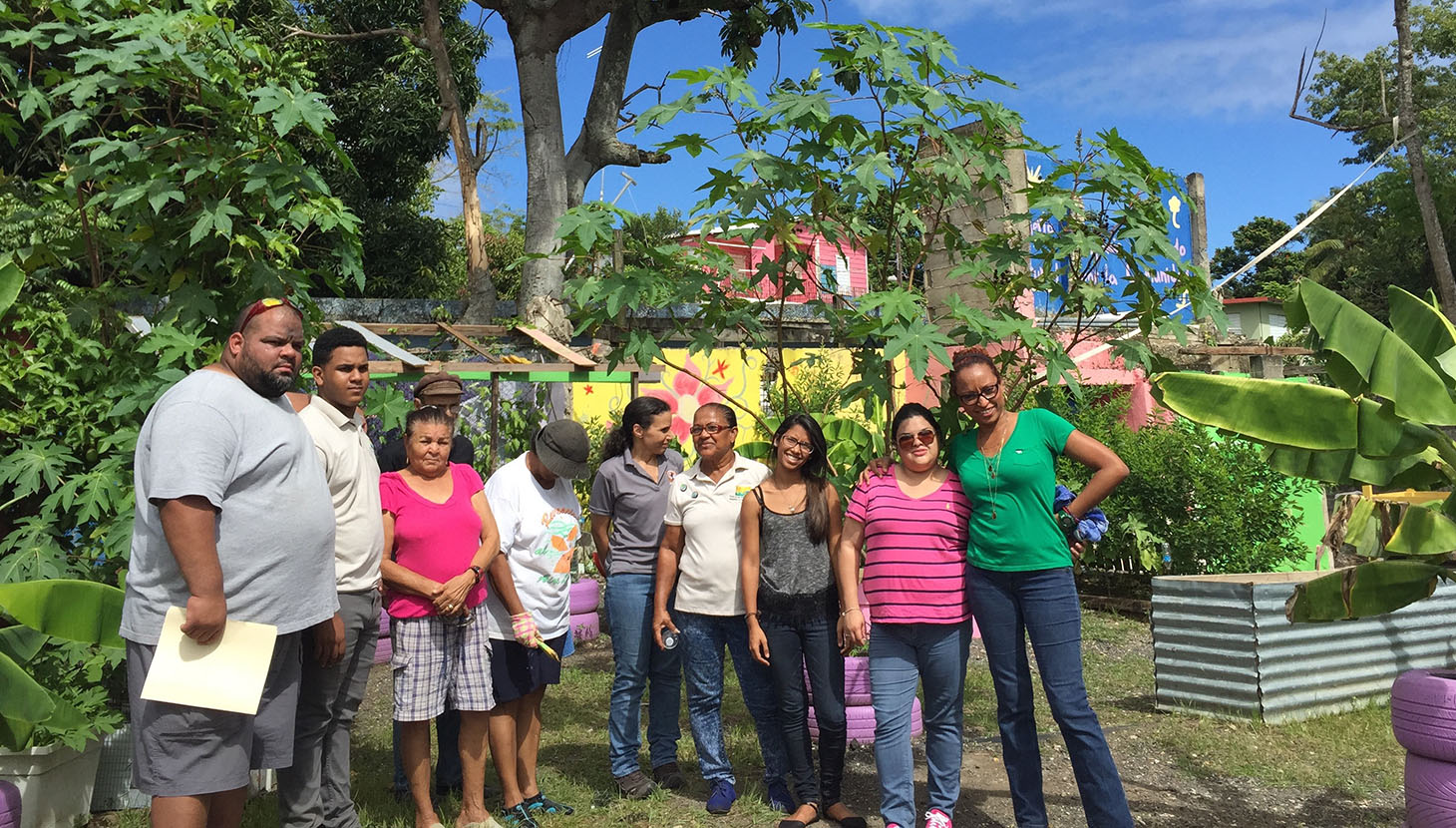 When residents of seven unplanned neighbourhoods along the Martin Peña channel in the Caribbean island of Puerto Rico were faced with gentrification and spiralling poverty, they fought back by establishing the first community land trust in an informal settlement. In 2016, they won the UN/BSHF World Habitat Award for creating a replicable instrument of land regularisation in informal settlements. Line Algoed explores the impact this has had.

Several years ago, at an Academy of Urbanism event, I expressed my concern for residents who would see their neighbourhood metamorphosed through a large-scale urban development project, which was being presented at the event. Many of the residents would be relocated because of the project, and I wondered whether they had been asked if that’s what they wanted, or needed. Someone said that residents often don’t know what’s good for them, and that asking them to be too involved in planning would make the profession obsolete. I became determined to dedicate my career to find concrete examples that counter this statement.

Professionals learn that they are the ones who know best. At university, architects are taught that they hold the knowledge of how space works and planners are taught that they know how cities work. But they are not taught that there are a lot of things they don’t know. What it means, for example, to be displaced from the home you grew up in. What it feels like to live in a building that will be demolished. Or how things work in a deprived neighbourhood. The class gap in urbanism is a thing.

As an anthropologist, I was always convinced there were ways to bridge the gap between professionals in planning and the people living with the effects of urbanism projects. I went looking for projects that involved residents. Most projects I found saw this involvement as a box to be ticked. Residents were invited to participate to an ‘urban lab’ ‘curated’ by trendy urbanists, with post-it notes on the walls stating that ‘cities are made by people’. Has anyone ever doubted that cities are made by people? I started spending most of my time with people in neighbourhoods where these projects were happening, and noticed the distrust many had in urban planners and all types of interventions, including friendly looking ‘urban acupuncture’ or ‘DIY urbanism’ projects. These projects were imposed upon them, without really questioning whether they addressed people’s actual and most urgent needs. Real social transformation of a neighbourhood, I was always convinced, can only be done by residents themselves, and professionals should be there to help.

As an evaluator of the World Habitat Awards, run by Leicester-based NGO the Building and Social Housing Foundation (BSHF) in collaboration with UN-Habitat, I travelled to San Juan, Puerto Rico. There, more than 10 years ago, residents established the world’s first community land trust (CLT) in an informal settlement. They learned about the CLT model mostly used in the USA (e.g. the Champlain Housing Trust in Burlington) and Europe (e.g. the East London CLT in Mile End) and localised it to turn it into an instrument that regularises their land tenure, while protecting their communities as a whole against gentrification. It was the project I was looking for and I decided to stay in Puerto Rico. 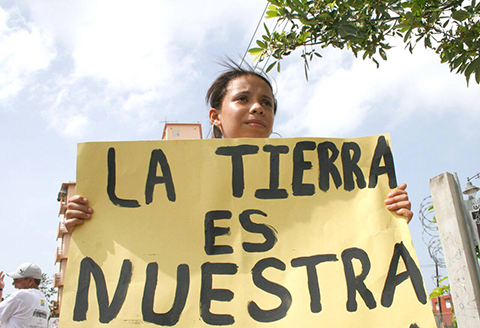 Puerto Rico, a US colony

Puerto Rico is an ‘unincorporated territory’ or commonwealth of the United States. In 1898, after the Spanish-American war, the United States took the Caribbean island from the Spanish colonisers. Since then, the US has used the island mainly for its own benefit, first with sugar and tobacco plantations, later – to name a few examples – by recruiting soldiers for the World Wars, promoting emigration to US industrial cities for cheap labour, testing women’s contraceptives, trying out nuclear bombs on its maritime bases, and more recently buying up land for luxury resorts. The country currently suffers from a profound financial crisis, facing a $72bn public debt. The debt is declared unpayable and the country is filing for a type of bankruptcy. President Obama and the US Congress sent a Fiscal Supervision Board to the island and through the Puerto Rico Oversight, Management and Economic Stability Act (‘PROMESA’ by its acronym, the Spanish word for ‘promise’, rather ironically), this Board is imposing cuts on the public sector to pay back creditors. Schools are closing, affecting at least 27,000 students, and hospitals are being defunded. The budget of the public university might be cut by half. The minimum wage of people under 25 could be brought down to $4.25 an hour to ‘encourage investment’, as the argument goes. Meanwhile, the debt has not been audited and few Puerto Ricans see themselves reflected in the discourse of having lived above their means. People are protesting tirelessly in the streets against austerity, but since Puerto Ricans are US citizens, many see no other alternative but to emigrate to the mainland. There are more Puerto Ricans living in the US than on the island, and in the last decade half a million people emigrated. In the meantime, myriad tax incentives, like the exemption of taxes on capital gains, are attracting millionaires to buy property and land. One of PROMESA’s promises for economic stability is to make selling public land easier. 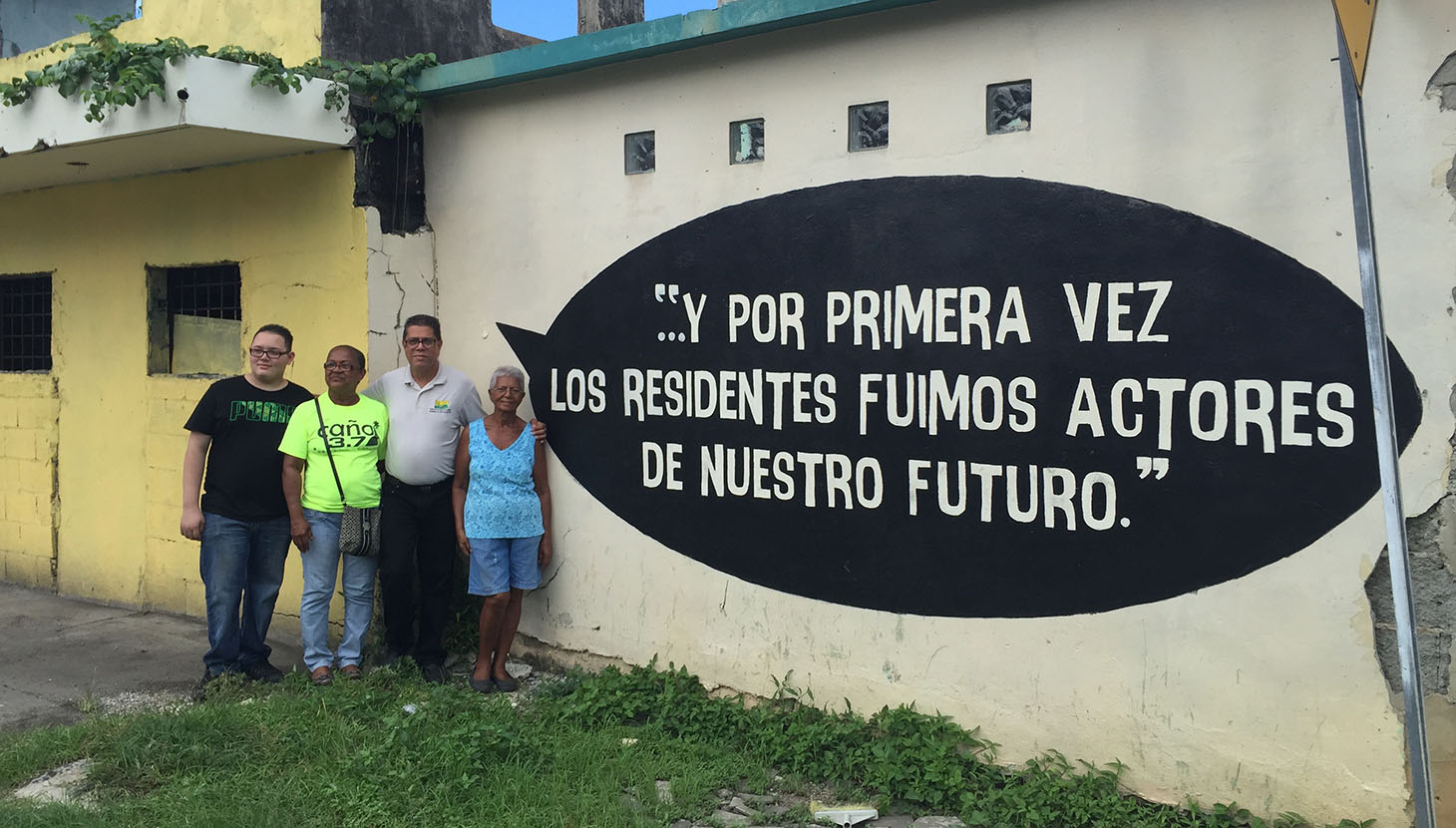 It seems as if the entire island is being deliberately gentrified. Per capita income in Puerto Rico is less than half that of Mississippi, the poorest US state.1 Puerto Ricans are being pushed out of the island by austerity and lower wages, while wealthier people are being lured in through tax incentives. This has been happening since industrialisation in the 1930s and 1940s, when a US report stated that “to make Puerto Rico’s economy feasible for sustained growth, one million Puerto Ricans were required to leave the Island.”2

It is this threat of sweeping gentrification that made residents of seven unplanned communities based along the heavily polluted Martin Peña channel in the centre of San Juan, come together. Their communities were established by impoverished farmers displaced from their farmlands. With no housing available at affordable rents, farmers and their families settled on the swamplands around the channel, filling them with debris to sustain their houses built of cardboard, wood and tin. Over time the city, incapable of accommodating these large groups of rural migrants, paved streets and provided electricity and water. But most of the houses in these communities had an inadequate sewage system, which is still the case today, and toilet water is drained directly into the waterway. It is now so polluted that the channel stopped flowing. The result is that with each heavy rainfall, not uncommon in the tropics, the communities get flooded with highly contaminated water. In the past, residents had seen large parts of their communities displaced to public housing projects or to other informal settlements in the name of ‘revitalisation’ – a term used in official discourse. People were not supposed to live in slum conditions, subsequent governments stated, yet the alternatives were not improving people’s lives either.

When the government announced 15 years ago that it would start plans to dredge the blocked canal and restore the mangroves, residents knew the threat of displacement was getting critical. They came together in a large community organisation effort (over 700 community meetings were held), which resulted in the appointment of community leaders and a Comprehensive Development Plan formally adopted by the Puerto Rico Planning Board. In these workshops residents explored options to allow them not only to participate in the infrastructure project but also, once the dredging happened, enjoy the improvements. Urban planners and other professionals such as social workers and lawyers were there to support the communities in their effort to find a way to be able to remain in and improve the area where they grew up. 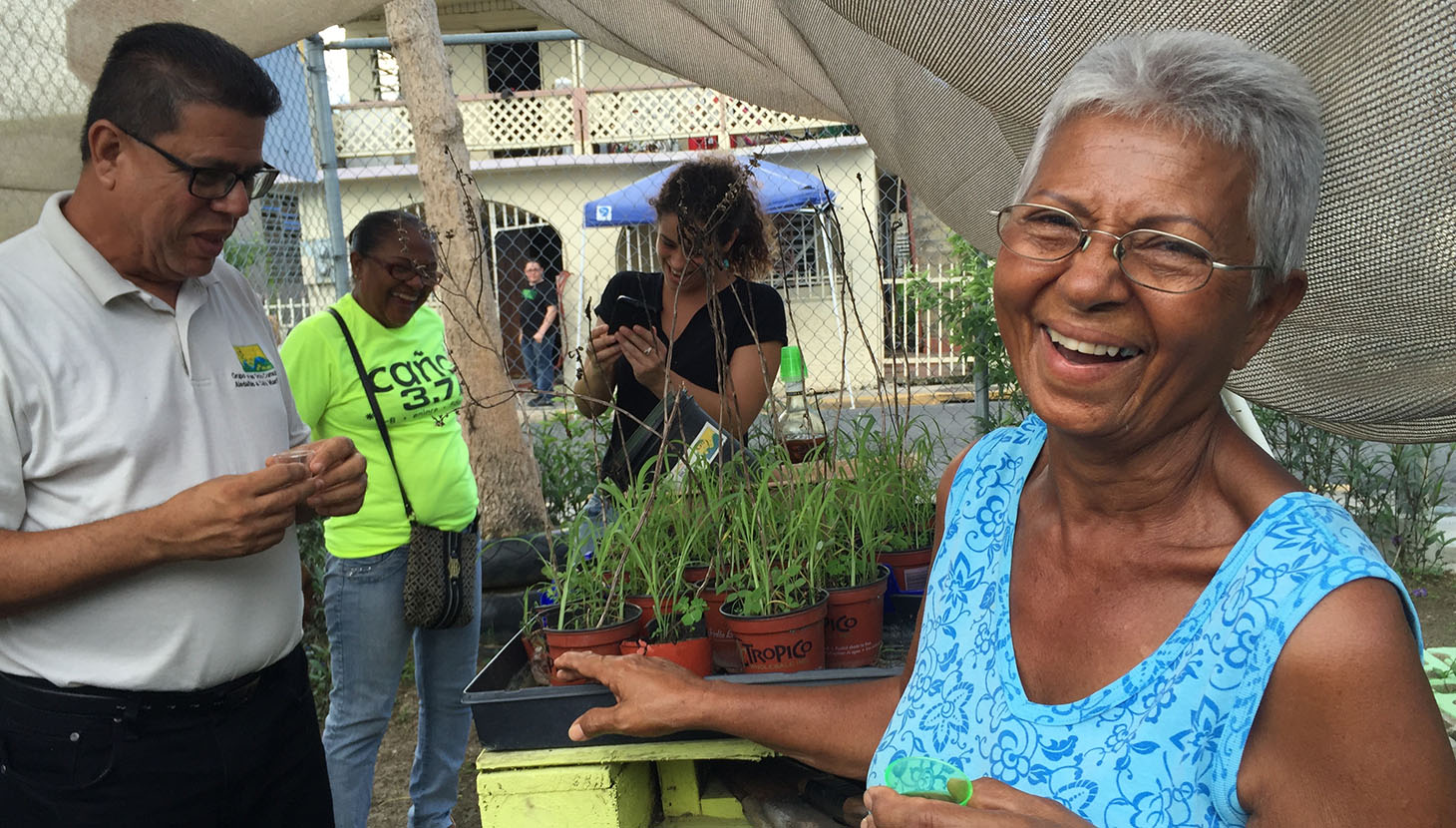 The community land trust model seemed to be the only model that would preserve the communities and their social history. Like other CLTs the land is separated from the houses making housing affordable, while the land is owned and managed by the community land trust which is a private non-profit organisation governed by community members. But so far it is the only CLT whose main objective is to regularise land in informal settlements and give people rights to the land in perpetuity, rather than leasing it for a limited number of years (99 years in most other CLTs). Residents receive surface rights deeds that are permanent and can be sold, inherited and even mortgaged. This permanence was essential for residents, as they feel a strong connection with “the land they created”3, and young people express a desire to grow old in their communities.

The residents were so well organised that they were able to push the government for a dedicated law, through which they could set up a public corporation, Project ENLACE. With professional architects and planners on board through Project ENLACE, community leaders were able to implement their Comprehensive Development Plan. Also through this law, 200 acres of public land were transferred to their community land trust. This may seem like a lot, and unlikely to happen in other countries, but as in many other Latin American countries the government of Puerto Rico had been handing out legal land titles to large numbers of individual households for decades. This public policy of individual land titles followed the influential argument of the Peruvian economist Hernando de Soto, who said that the ‘poor’ were also entitled to private property and that a well functioning market economy was only possible with a formal property system. Through the community land trust, public land was transferred to the communities at once in a larger amount. Now, any increases in land value that will result from the dredging and related urban renewal projects will remain within the community. This makes the CLT an instrument not only to regularise land and secure permanently affordable housing, but also to overcome poverty.

In view of the world’s rapid urbanisation largely concentrated in informal settlements, it is urgent we look at new models of collective property to regularise land and mitigate poverty. People need greater control of planning instruments to help them transform their own communities, and urbanists can be there to help with their technical expertise. There are few examples of projects that do exactly that, but it is happening in Puerto Rico, and it could be happening in many more places.

Line Algoed is an urban anthropologist specialised in the intersection between urban planning, housing, community engagement and international development.

For information on the World Habitat Award for the Caño Martín Peña Community Land Trust: bshf.org/world-habitat-awards/winners-and-finalists/cano-martin-pena-community-land-trust/