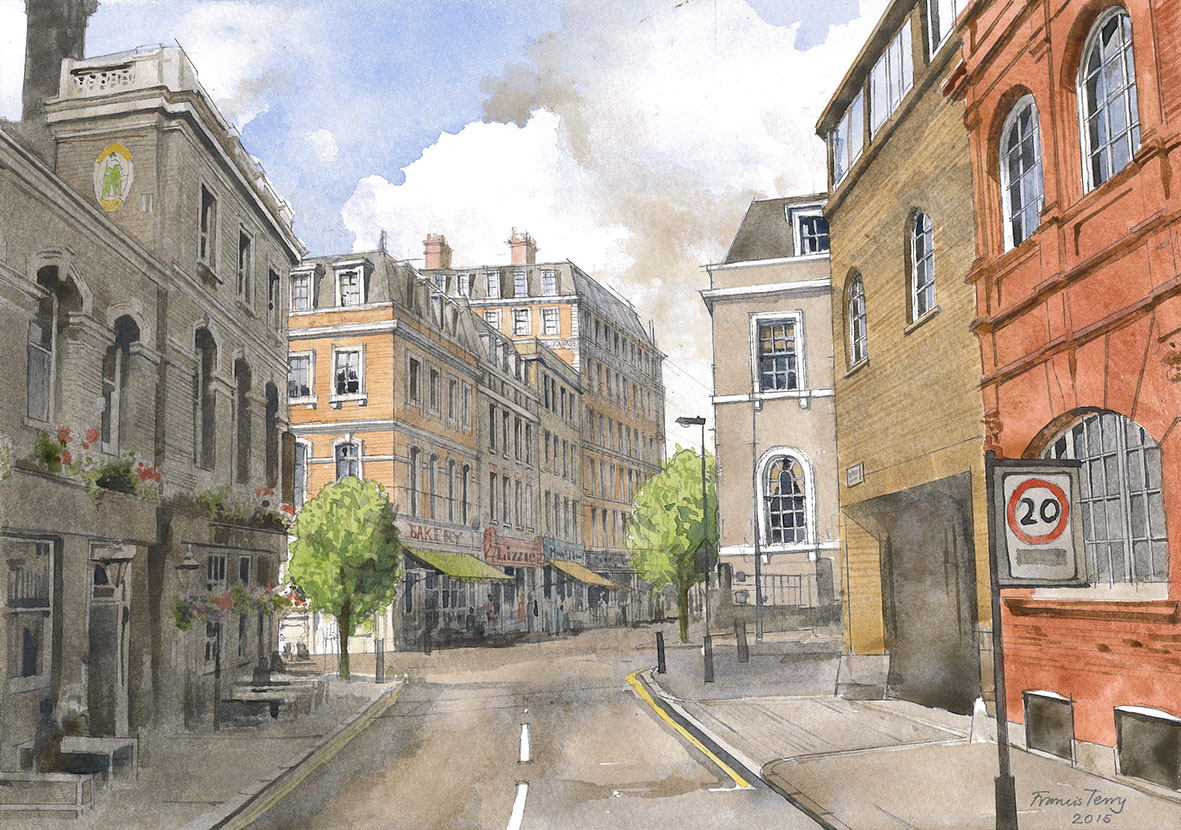 Improved computing power and available data gives us the opportunity to explore complex relationships and provide some empirical evidence for the linkages between design, urban form and wellbeing. Nicholas Boys Smith AoU discusses findings of his study ‘Heart in the Right Street’.

A few years ago David Halpern, the influential psychologist who runs the Cabinet Office Behavioural Insights team (often called the ‘Nudge Unit’), made an alarming statement in an interview: “architecture and planning does not have an empirical, evidence-based tradition in the sense that … sciences would understand. There are very few studies that ever go back to look at whether one type of dwelling or another … has a systematic impact on how people behave, or feel, or interact with one another.”

The good news is that improving computing power, vastly greater public availability of data and refining statistical techniques are now permitting us to measure, analyse and compare the relationships between urban form, design, beauty, happiness and value as never before.

There has not just been a revolution in the ‘science of cities.’ There have also been dramatic steps in our understanding of wellbeing. Over the last 30 years it has been consistently shown that you can, literally, measure happiness. Asking a simple question such as ‘generally speaking how happy would you say you are’ and rating answers on a scale leads to results which, when asked to enough people, correlate well with ratings given by friends, independent observers and (significantly) with such drivers as income, employment status, marital status, health, personal characteristics (age, gender, and personality), and major life events.

So today is an exciting time for urban studies. We can research, as never before, the links between specific components of the built environment and measurable wellbeing. We also think it is an important time for urban studies. The pressure to meet housing needs in the UK is leading to more and more pressure on density and on an increasing number of affordable and rental units being built as small flats within large blocks. Is this wise?

The social enterprise that I run, Create Streets, has therefore recently published a study, Heart in the Right Street, which was partly a summary of academic and statistically robust correlations between elements of built form and measurable wellbeing and partly a multiple regression analysis of the urban form and demographic indicator datasets against wellbeing and health indicators.1 Our findings have featured in The Economist and The FT among others. Some will be very reassuring, indeed familiar. Others may be rather more surprising and challenging. One thing is incontestable however. In understanding where people are happy, why and how, design really matters.

Greenery matters but it has to be in the right place

Many studies have now shown a link between regularly looking out at an attractive green environment and mood, stress, recovery from mental fatigue and wellbeing. However, greenery needs to be done in the right way. It can be threatening. It can be expensive to maintain and therefore susceptible to budget changes in the future. There is evidence that green space is degrading into hard paving for reasons of economy in the UK right now.2 Likewise green space that is too big and too far away tends to not make a difference to people’s everyday life. UK focus group research shows that, given the choice, most people would rather have access to modest private gardens which they can use effortlessly every day and which seem to work better in managing family stress and wellbeing.3 American research shows how use of parks collapses at a distance of about four blocks.4 What is key therefore to capture the wellbeing benefits is to have frequent green spaces inter-weaved into the city either as private gardens, communal gardens or well-overlooked public spaces between blocks and where people really need them and frequent them. The evidence on street trees is particularly clear and they should be planted everywhere humanly possible.5 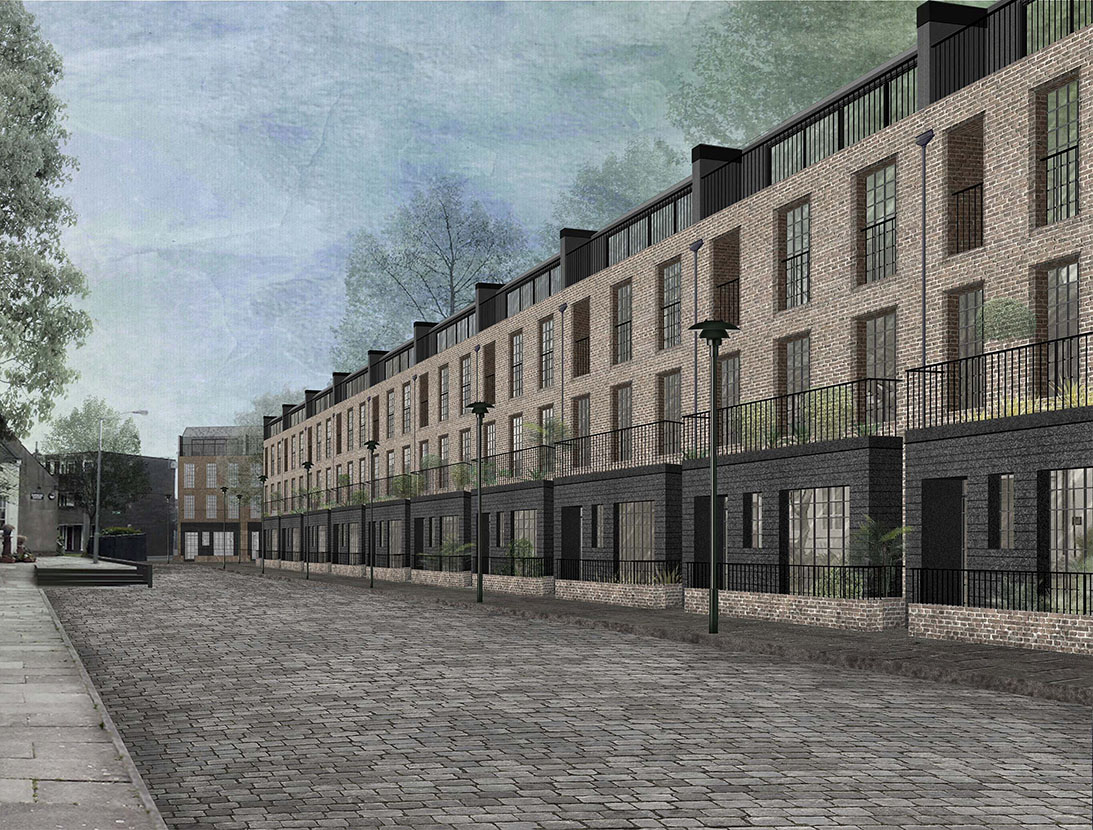 Some urbanists fetishise the excitement and innovation of the high-rise city centre. In reality these work best only for a few. Urbanists would be better advised to advocate a middle ground (think Victorian suburb) that captures the privacy benefits both of suburbia and the connectivity benefits of city centre living. Most people don’t want to live in overly large blocks and there are very rational reasons for this preference.6

There are numerous wellbeing indicators associated with homes and buildings at human scale height and form. The most comprehensive literature review we have been able to find concluded that: “the literature suggests that high-rises are less satisfactory than other housing forms for most people, that they are not optimal for children, that social relations are more impersonal and helping behaviour is less than in other housing forms, that crime and fear of crime are greater, and that they may independently account for some suicides.”7

This is not to say that towers are always bad. Indeed, consistently around 10 per cent of the population prefer them. But they tend to be far more popular amongst the rich and the childless. The rich can certainly cope with their higher management costs. Service charges in the Barbican Centre’s Shakespeare Tower are now £8,000 a year.8

Clearly people can be happy in towers and miserable in houses and vice versa. But in our analysis of 85 peer-reviewed academic studies that contrasted socio-economically comparable groups living in high and low-rise accommodation, 67 (79 per cent) found that high-rise residence was negatively associated with some aspect of wellbeing.9 Various studies strongly suggest that a large number of unpredictable, unavoidable and unwanted encounters with large numbers of strangers lead to higher levels of stress, conflicts with neighbours and a sense of loss of control.

The type of streets that we build is very important. As will be familiar to many, streets that ‘plug into’ the surrounding city are associated with numerous positive wellbeing outcomes. A well-connected, highly walkable, traditional street grid of differing natures and sizes with multiple junctions and route choices is best. Some streets should be pedestrian or bicycle only but most should be mixed use with generous pavements wherever possible.10

But it is not just streets that matters. So do blocks and facades. If larger residential buildings really are felt to be essential, research indicates that for most people inside and outside the building the best thing is to design them as if they were smaller buildings. If their external facades are ‘broken up’ vertically they will promote more pro-social behaviour among passers-by. In one study pedestrians in front of an active façade were nearly five times more likely to offer assistance to a lost tourist than at an inactive façade site. Of those who helped, seven times as many at the active site offered to let the tourist use their phone (7 per cent versus 1 per cent). Four times as many offered to actually lead the tourist to their destination (4 per cent vs 1 per cent).11 Active facades help makes cities work: a Copenhagen Study calculated that there was around seven times as much activity in front of active facades as the passive.12 Activity brings all sorts of wellbeing, economic and crime-reducing benefits.

As will be familiar, walkability is vital. Studies have shown that residents of the most walkable neighbourhoods (ones which plug into city-wide connectivity) were nearly two and a half times more likely to get sufficient physical activity than residents of the least walkable.13 In cities with rising levels of obesity, air pollution, and congestion getting more people walking is vital. These levels tend to be higher in more deprived communities, and thus the importance of improving these factors in social and affordable housing becomes even greater. 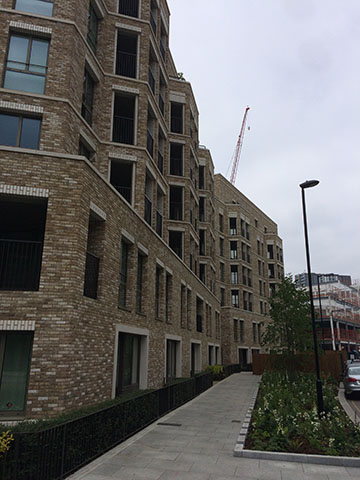 Beauty really matters. There is measurable emotional attachment to beautiful places – a 2011 US survey found stronger correlations between a place’s physical beauty and people’s satisfaction with their communities than any other attributes.14 A 2008-2010 Gallup survey of 43,000 people in 26 cities agreed. It found that residents’ ratings of the aesthetic attraction of their cities and green spaces correlated significantly with residents’ attachment to their city. This is turn correlated with GDP growth. In this survey, aesthetic attraction to their city came third in the pecking order, and ranked above education, basic services or safety.15 A third study has also found that a perception of beauty is significantly associated with community satisfaction and significantly more important than individual demographic characteristics.16

A strong sense of place, that the development ‘couldn’t be anywhere’ also really matters. A recent report found that a desire to respect historic form, style, and materials had 84 per cent support in participant interviews.17 This is psychologically credible, even sensible. Environmental psychologists have shown that alongside green space and soft edges we enjoy gentle surprises and pleasant memories.18 We dislike sharp edges, darkness, sudden loud noises.19

The strong preferences that most non-designers show for a more locationally and historically-referenced architecture is in contrast to many professionals who often place a higher focus on design innovation. A range of studies (including our own) have found a predictable difference between what most professional designers and the wider public prefer to see created in the built environment. We call it the design disconnect.20

Urbanists can be proud of their discipline and very confident in its importance. However, they should also be careful to respect the natural preference that the majority feel for suburban life patterns and to remember the importance of beauty as understood not necessarily by them but by the wider public. Urban design is a service industry not an art form.

Nicholas Boys Smith AoU is the director of Create Streets