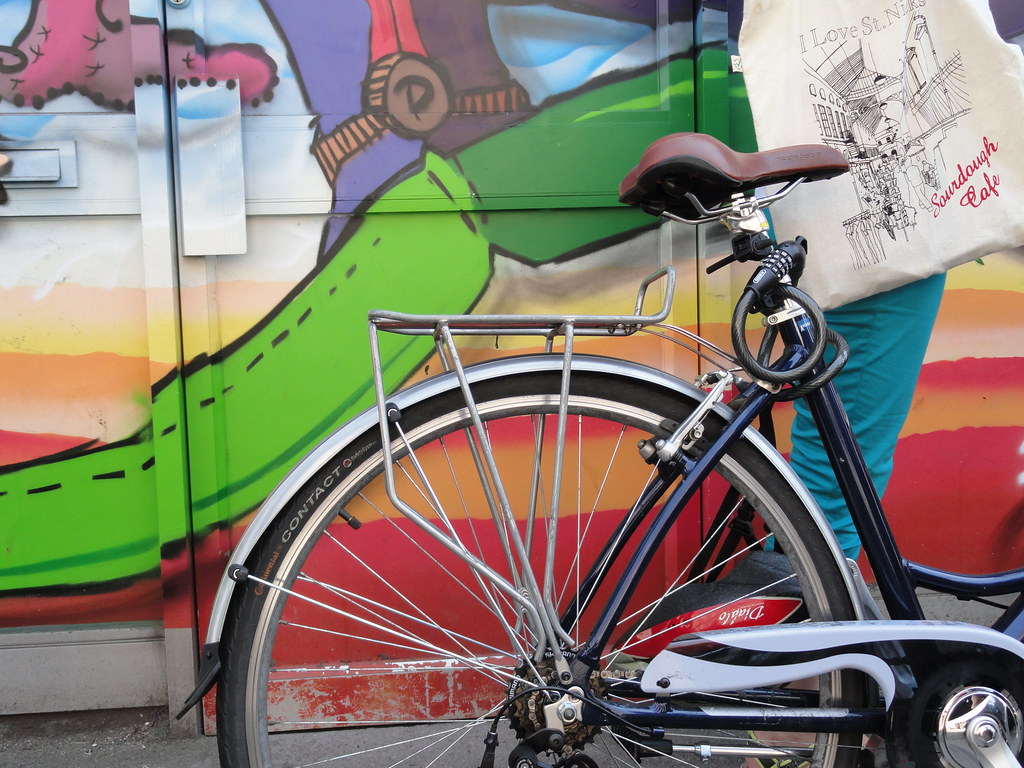 North Street is interesting for its active community. It has an intense level of voluntary effort from businesses and residents and a strong local investment in the various organisations with an interest in the future of the area. The grassroots approach permeates much of the regeneration achievements in the street and is a strong part of its identity. The location of drop-in centres for community projects in the street embeds the community role physically in the place and encourages local footfall.

Community-led projects are delivering highly visible outcomes that add to the local distinctiveness of the area. Bristol is now famous on the world stage for its ‘Upfest’ international graffiti competition. This started in North Street and is managed by a local shop owner.

3. Taking a pragmatic and opportunistic approach by adapting to current funding themes

North St has embraced funding opportunities as they arise. It is a strong ‘can do’ approach which enables local people to optimise available funding. For example they have used their ‘Portas Pilot’ to demonstrate what can be achieved with an uplift of finances and as a stepping stone towards creating their recently launched BID.

The regeneration of the ‘Tobacco Factory’ with a Shakespeare Theatre on the first floor provided a focus for the area and kick-started its reputation across the city as a ‘go to’ creative place. This private sector-led project has spawned other investment in day and evening creative venues, which in turn appear to have lead directly to an uplift in the local housing market as the district has become a desirable place to live for young professionals.

North Street is very much a street in transition. It is one of three streets serving the densely populated area of South Bristol, stretching from close to the city centre to the periphery at the western end of North Street. The other streets are West Street and East Street. All of these have tight terraced streets running at right angles to them creating strong density that can still support a range of uses and facilities.

All three main streets originally consisted of ‘active frontage’ with retail along their entire lengths but the City Council has abandoned hope of retaining such a high volume of the type of small retail/business units that would traditionally have thrived in such locations. There are now sections of new residential frontage. These demonstrate a variety of attempts to rationalise the need for privacy with the highly public location, some more successful than others.

‘Daily needs’ shopping is clustered at certain nodes relating to density and ‘walkable’ access, as expected. Like many high streets there are a significant number of charity shops and empty units.
North Street specifically is interesting, not so much for its architecture, though it does have some interesting landmark buildings, but for its active community. Along much of its length it reveals all of the above features, but at its westernmost end a significant change has happened. Some fifteen years ago one of the former WD & HO Wills (now Imperial Tobacco) buildings was rescued from demolition by a local architect – now Mayor of Bristol, George Ferguson – following the decline of the tobacco industry that previously dominated this part of Bristol. The building was re-opened under the name the ‘Tobacco Factory’ with a Shakespeare Theatre on the first floor. Even without a significant investment in the interior it quickly acquired a widespread reputation. The remainder of the building was gradually converted with private money and now includes restaurants, office space, workshops for creative industries and some residential units. A Sunday Market was established in the car park selling mainly ethical and local goods and occasional street markets (‘Fairs’) are organised with the street temporarily closed to traffic.

Gradually the area has become a destination for people from across the city. This effect has spawned, in the immediate area, new businesses catering for a similar market (eg. a stand-up comedy venue, a Spanish (music venue) restaurant, cafes) and has created an uplift in the local housing market; it has become ‘a desirable place to live’. Following the success of the Tobacco Factory, a similar sized industrial building across the street has re-opened as a brewery and theatre and a third such mixed-use refurbishment/conversion is planned in another nearby former tobacco building.

This western end of North Street also has a strong local shopping offer of mainly independent shops including butchers, bakers and greengrocers. There is evidence of a balanced day and night time economy. One of the big challenges for North Street is to spread the vitality and shopping offer along its one mile length. This is not expected to be easy as the physical characteristics and nature of the various neighbourhoods along the street are quite different. The shopfronts and streetscape public realm layout is quite different and that makes it more challenging to create a pedestrian friendly space, though the 20mph zone planned for the majority of the inner area of the city may offer new opportunities. However it is noticeable that the 20mph speed limit is not upheld in North Street, particularly in the eastern end where a lower density of tree planting and pedestrians detracts from good practice.

The intense level of voluntary effort, from businesses and residents invested in the various organisations with an interest in the future of the area suggests that it should have a bright future. The location of drop-in centres for community projects is an important part of embedding the community role of this street and encouraging local footfall.

These are largely initiated and run by women keen to generate social capital and include ‘Bubbahub’ a café/playspace directed at the young parents and their children; and ‘Paper Village’, a craft materials shop (wool, paints, etc.) that offers training courses for people of all ages in knitting and needlework, and community workshops. The initiative has also been behind a project to decorate street furniture and trees across the city with knitted sleeves. Also a voluntary initiative named ‘Play Out’ has been campaigning for and offering practical help and support to communities wishing to establish outdoor playtime for their children in their own streets. This initiative has recently received government support to roll it out across the UK.
The ‘UpFest’ is a particularly interesting initiative. It was established by a local artist with a keen interest in public art (of a not entirely accepted kind) and turned into a local festival that now attracts wide interest and has spawned a growing business. This has been achieved with virtually no public subsidy. In recent years Upfest has taken on the decoration of security shutters to brighten up the street at night. They were recently engaged by the Town Team to create the ‘Beautiful Bugs of Bedminster’ (sculpted insects fixed to buildings) combining Upfest with the Government funded and locally sponsored initiative to regenerate the high streets.

The active community group that has initiated local regeneration grew out of an idea originally prompted by the closure of the tobacco industry locally, in the late 1980s. Community space and activities that had been provided previously by the somewhat philanthropic tobacco company had been lost. When a Victorian primary school building became redundant, local activists, supported by their local councilors who held senior positions as Chair of Housing and Chair of Planning, acquired it for a nominal sum from the City Council. They developed it as a community centre and converted part of the site to housing for elderly residents.

The recent successful bid for a ‘Portas’ Government grant has boosted businesses networking to improve the streets. The traders have subsequently elected to establish a Business Improvement District (BID). The BID area of interest covers all three high streets, which share many of the same problems and will benefit from collective solutions. The North Street Traders Association has been set up to represent traders, which together with the BID works with Greater Bedminster Community Partnership that represents local residents and all local interest groups. This is all evidence of great local support for the street, which is reflected in the liveliness of the street scene.

Whereas the condition of the public realm does not match the aspirations of this enterprising community, it is to be hoped that their determination and resourcefulness will bring about more physical improvements in the coming years.