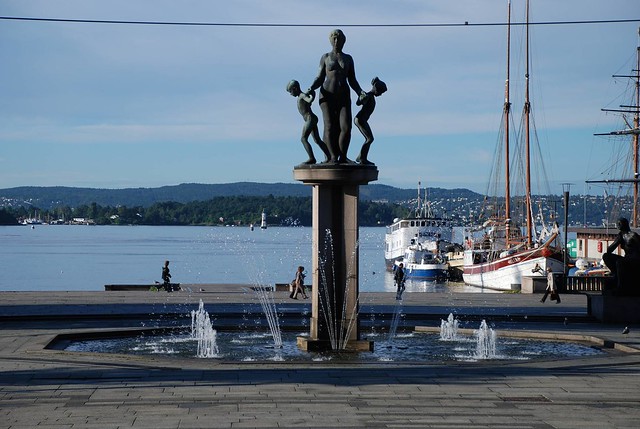 Oslo has a clear and forward-looking vision for the city, the region, and within the national framework, reflected in a Municipal Masterplan (2008) that guides the decisions of council and plays a leading role in the planning and development process, particularly in respect to the needs of the city to remain within the physical limits set by the surrounding hills and forest that act as an effective green belt;

The City Council of Oslo takes the lead in planning and implementing public realm improvements/developments, but seeks to actively engage with various stakeholders as well as affected communities through widespread consultation and negotiation;

With a strong maritime character due to its location on the fjord, combined with the lush forests and hillsides surrounding the city, Oslo provides a unique blend of urban and natural that is rooted in a respect for the environment, evident in the low density urban fabric that is supported by a considerable amount of open space, lush vegetation, and green corridors (based around the rivers and streams), as well as the islands of the fjord – they have dubbed the city ‘the blue and the green and the city in between’;

The major transformation of Oslo’s waterfront into an attractive, high-quality, higher-density, mixed-use development is illustrative of the efforts that the city has put into land reuse and regeneration, reducing the need for new space for development, while minimizing the impact on the environment;

Taking advantage of the revenue brought in from the ring toll within the city centre, Oslo is able to make major investments and improvements in their public transport system, comprising of suburban trains, trams, buses, and an increasing focus on cycling and walking as sustainable alternatives, to promote a long-term sustainable future.

The City of Oslo plays a key role both nationally and regionally and is a significant focus for growth in a highly dynamic economy. There is a broad consensus that this growth should be directed to the existing urban area and that it should take place to the highest standards of social and environmental sustainability. This is reflected in a planning framework that guides the decisions of the City Council which plays a leading role in the planning and development process. It is apparent that the growth of the city is the subject of lively debate. For example, the regeneration of the city’s waterfront has become a contentious issue where differences of opinion persist. While the City Council takes the lead and ultimately has the power to take decisions, these are only reached after prolonged discussion.

The City actively encourages individuals to have a stake in their communities through home ownership and works to ensure that the needs of the less advantaged are taken into account in the planning and implementation of its plans and programmes.

Oslo has a strong identity which derives primarily from its location at the head of its fjord which contains a range of islands and insets which are used for pleasure cruising. The use of the water, including ferries and cruise liner traffic give the city a strong maritime character. However the city is also fortunate in being surrounded by hills and forests which provide residents with easy access to nature and the countryside. This is reflected in the green character of many of the city’s residential districts. However with a growing multi cultural population and the creation of higher density mixed use neighbourhoods the residents of Oslo are enjoying a more urban way of life. Despite this, there remains a deep respect for nature and the environment.

Oslo is undergoing a major transformation, most notably through the regeneration of the waterfront where former port and industrial land is being reconnected with the city centre through the creation of new public realm. This has been enabled by the construction of the cross harbour tunnel and the downgrading of urban highways. The new opera house is widely recognised as an iconic building but the ‘barcode’ business district, comprising high rise slab blocks, has been a source of controversy. This has involved a passionate debate between those concerned with the heritage of the city and those who are looking for a more modern image.

By virtue of economic success, open attitude and the attractiveness of its setting, Oslo has become a highly attractive place to live, work and visit. Major changes have taken place, and are still underway, with the aim of making the city even more attractive both to visitors and the city’s rapidly growing population. The city offers a range of living environment’s from high quality waterfront neighbourhoods to low density residential suburbs. However the less desirable areas are by international standards attractive places to live.

Oslo is a boom city which is enjoys high levels and growth and employment. How far these conditions relate to the urban policies being pursued by the City and how far they derive from the strength of Norway’s resource based economy is impossible to determine. It is clear though that the city is using the resources at its disposal to create an environment in which commercial activity can take thrive. This includes the creation of a new city centre business district for international companies as well as attractive mixed use neighbourhoods. With a strong tradition of SMEs and self employment the city also provides a wide range of opportunities for people to participate in the labour market and works with less advantaged communities to support people into work.

The plans and programmes of the city have been successful in stimulating private sector investment. Examples include the regeneration of the waterfront, the redevelopment of the former city hospital as a sustainable inner city residential neighbourhood (Pilestredet Park) and the transformation of Nydalen. Such is the strength of the city’s economy that there is a high success rate in translating plans into reality.

Oslo has an open and tolerant society which embraces diversity and a wide range of lifestyles. This reflects Norway’s social model, which despite the shocking events of the summer, remains at the heart of the way in which the city operates. While there is some degree of social segregation, Oslo is by most standards an egalitarian city. Special efforts are made to help immigrant communities, helping them integrate into wider society with a particular focus on children.

Environmentally the city seeks to work in harmony with its surrounding fjord, hills and forest. Oslo’s natural assets are subject to protection and efforts are being made to develop the city’s green infrastructure using the river corridors which link green spaces and neighbourhoods.
Virtually all new development is taking place on previously used land. This includes former port land which provides the focus for major waterfront regeneration and former industrial areas such as Nydalen and Ensjo which are in the process of being developed as new mixed use neighbourhoods. High environmental standards are being achieved in new development areas, reflecting the city’s commitment to sustainable development.

Oslo is taking advantage of the resources provided by is ring toll charge to invest in improvements to its public transport system. This is well provided for in terms of suburban trains, trams and buses. These are taking an increasing share of the demand for transport arising from the city’s economic and demographic growth. In addition, the city is promoting cycling and walking as sustainable alternatives taking advantage of green corridors and routes being developed across the city. However Oslo has not developed this aspect as far as other Scandinavian cities. This perhaps reflects the limitations imposed by topography and climate. Significant investment has been made and continues in talking the legacy of 1960’s and 70’s urban road schemes. Many of the city centre and waterfront roads have been put in tunnels creating the opportunity for dramatic changes in the public realm.

This is helping to turn Oslo from the ugly duckling of Nordic capitals into a functioning, high quality city.