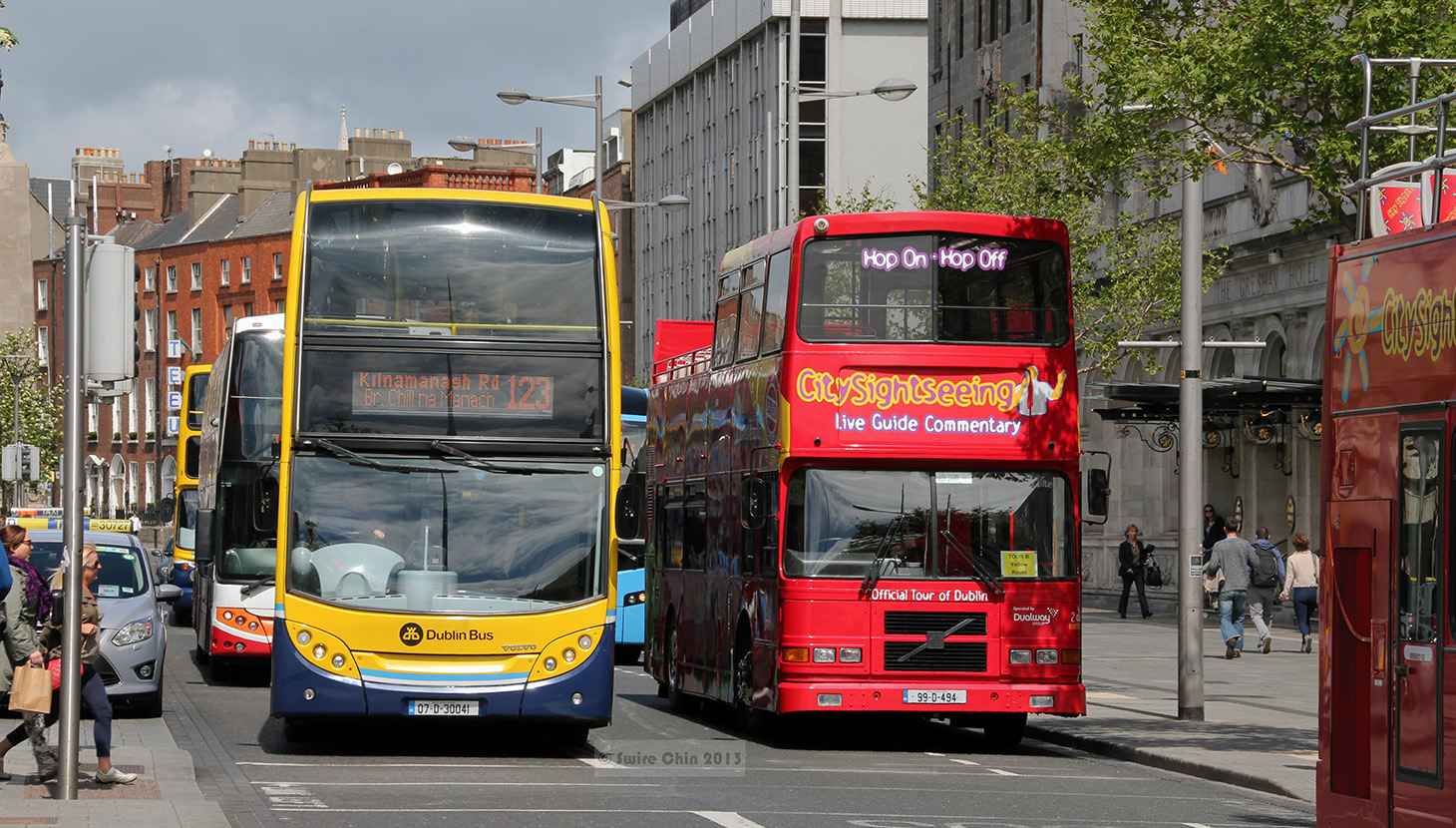 Unlike Buchanan Street and Regent Street/Portland Place, Dublin’s O’Connell Street is a grand boulevard. One of the most impressive main streets in Europe, it is 500 meters long and up to 49 metres wide, with statues of Irish historical figures lined up on the central median.

For more than 150 years, until it was blown up by the IRA in 1966, the centerpiece of O’Connell Street was Nelson Pillar, a huge Doric column that rose to a height of 120 feet (36 meters). In its place today stands the Dublin Spire, a 120-metre stainless steel needle by Ian Ritchie.

The spire, more contemptuously known as “The Spike” or “The Stiletto in the Ghetto”, is a symbol of the rejuvenation of the street in recent years, after decades of being down at heel, with wider pavements on each side and a central plaza in front of the General Post Office.

It was in front of the GPO, on Easter Monday 1916, that Padraig Pearse proclaimed the Irish Republic. The rebellion he led was crushed by the Crown forces after a week of fierce fighting, during which the GPO was shelled from a British gunboat in the River Liffey.

Not only did the new Irish Government restore the GPO, but most of the street was rebuilt in grand neo-classical style in the 1920s under the direction of, the then, City Architect Horace Tennyson O’Rourke. Notable buildings include Clery’s department store and the Gresham Hotel.

The heyday of O’Connell Street was in the 1950s, with places of entertainment such as Metropole and Clery’s Ballroom as well as the Capitol, Carlton and Savoy cinemas, Cafolla and the Palm Grove ice cream parlours, and the social life that centred on the Gresham Hotel.

The destruction of Nelson Pillar ushered in a long period of decline as Dublin’s centre of gravity and social life moved south of the river. The Metropole and Capitol closed as did the ice cream parlours, and the street was taken over by amusement arcades and burger joints.

Various efforts were made to find a suitable replacement for The Pillar, as everyone called it, but it was not until 1998 when Dublin City Council produced an integrated area plan for O’Connell Street that its fortunes began to change with a radical re-ordering of the public domain.

An international design competition for the Pillar site ushered in the new era. It attracted over 200 entries, ranging from an enormous tattered Tricolour seemingly shot through by machinegun-fire to a “Love Elevator” featuring the romantic musings of Irish poets.

Ian Ritchie’s secular spire was hugely controversial, generating heated debate in the letters pages of the Irish Times. However, a large crowd gathered in O’Connell Street to watch it being capped in 2003 and it quickly became a symbol of the city – used as the “l” in Dublin.

Pleached lime trees were planted to form a square in front of the GPO, using high-quality granite and limestone paving. The footpaths on each side of the street were doubled in width, and new trees planted to replace the old London planes that used to dominate the street.

Though the needs of cyclists were inexcusably neglected, pedestrians could barely believe the generosity of space being given to them. Much of the traffic now consists of double-deck buses and the street is also traversed by the Luas trams running from Tallaght to Connolly Station.

There is a particularly heavy footfall at the Spire, mainly shoppers crossing between North Earl Street and Henry Street, one of Dublin’s principal shopping areas. But a magnet is needed to draw them north of this east-west axis and bring more life to Upper O’Connell Street.

The most likely magnet is a shopping centre scheme for the Carlton cinema site and adjoining properties. This critical site was acquired by the City Council by compulsory purchase amidst seemingly endless legal wrangles following the failure of earlier plans to redevelop it.

The latest plan – drawn up by architects BKD, Donnelly Turpin and McGarry Ni Eanaigh — would create two new streets to link O’Connell Street with both Moore Street and Henry Street, to the west and south respectively, and would include a cascading high-rise hotel.

Another major shopping precinct is due to be installed along Prince’s Street, on the southern side of the GPO, when Arnott’s department store extends into the former Independent Newspapers offices and printing works. A 1916 museum is also planned for the GPO.

Meanwhile, the former Ambassador cinema – built in the mid 18th century as part of the Rotunda maternity hospital on Parnell Square – is to be converted into a new central library for the city, replacing a makeshift library located in the ILAC shopping centre on Moore Street.

It will form part of a wider vision of turning Parnell Square into a new cultural zone, which also includes the Gate Theatre and the recently extended Hugh Lane Dublin City Gallery. The Garden of Remembrance, commemorating Ireland’s freedom struggle, is also being opened up.

Plans for a metro line linking Dublin Airport with St Stephen’s Green have been amended to include an underground station on the east side of Parnell Square, and it seem likely that this, together with the other planned developments, will finally lift Upper O’Connell Street.