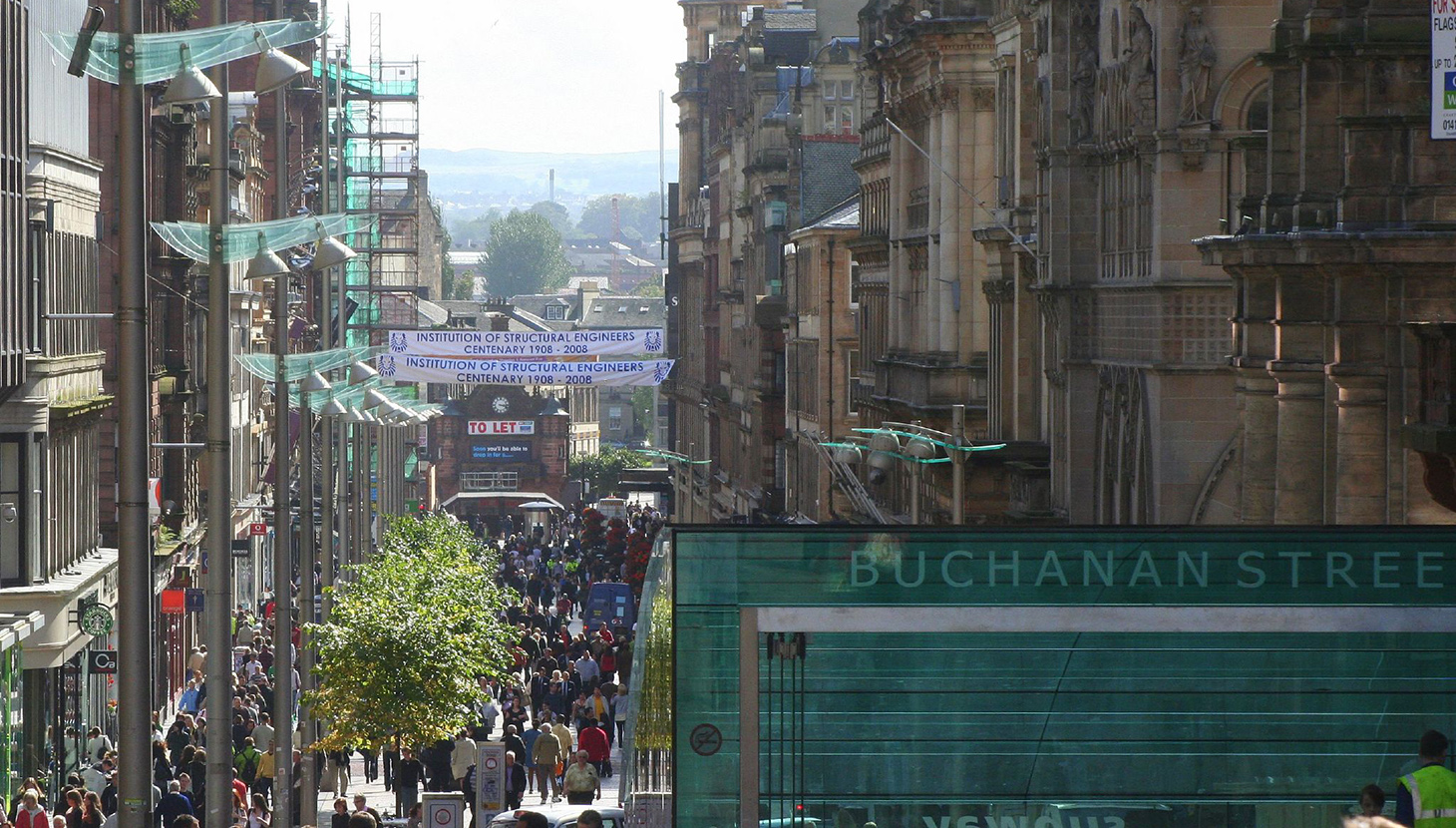 Buchanan Street in Glasgow is “the spine of the city”, in the words of Brian Evans, (Academician and partner in Glasgow-based Gillespies landscape architects) and “the first important thing is not to break it”.

As part of Glasgow’s famous grid, Buchanan Street, (which runs north-south from the Royal Concert Hall to St Enoch’s Square) is the “hinge” between the city’s first and second new towns. Pedestrianised in 1978, the upgrading of its public realm was completed in 2000.

Much of the city’s recent transformation derives from the “Glasgow can do it” slogan devised by the City Council and Scottish Development Agency – then headed by Academician Stuart Gulliver – after they got together to form Glasgow Action in the late 1980s.

Glasgow city centre was crying out for attention and needed to be made more attractive to business, inward investment and as a place to live. It could only benefit from an effort to “benchmark” the city against European competitors, such as Amsterdam.

Buchanan Street, 1km long and just over 20 metres wide, was identified as Glasgow’s “front door”, rather than the more formal civic space of George Square. But a lot of work needed to be done to improve its public realm and public life.

Consultants MBM, from Barcelona, and Gillespies looked at where people were coming from and going to, with a view to overcoming issues of access and circulation – based on an understanding of the topography of the city and the way people used its streets.

Some of the projects that derived from this “communication and consultation” exercise include the net of celestial light over Royal Exchange Square – the “Christmas duvet”, as some call it – and the radical departure of throwing blue light on Buchanan Street.

New street lamps, based on the golden section, were installed all the way along the street, with cafes on the east side catching the afternoon and evening sun. Provision was also made for canopied enclosures, such as Rogano’s, so people could eat outdoors.

The refurbishment scheme also included reconfiguring the city’s underground, with new canopies and station entrances to make the experience of using it more like air travel – before all of the hassles necessitated by heightened security requirements at airports.

Buchanan Street is covered by Glasgow City Council’s Safer City Centre initiative, which involves working with the police, health board and business community. Its aim, according to city centre task force co-ordinator Willie Caie, is to “make sure people enjoy themselves”.

Some 200 businesses work together in partnership with dedicated patrols, community police and radio links from shops to the CCTV control centre, which monitors 90 cameras in the city centre as well as two CCTV vehicles. It was recently extended to include nightclubs.

With 530 licensed premises in Glasgow city centre, there are lots of people on the street day and night, particularly at weekends. The capacity of nightclubs alone is 50 000. Bus and taxi marshals have been deployed, and upgraded lighting installed in the “night zone”.

On Buchanan Street, as elsewhere in the city centre, new triple-tiered planters with attractive floral displays are part of a beautification programme to support Glasgow’s bid for the 2014 Commonwealth Games. It also benefits from the Clean Glasgow initiative.

Hugh McKergow, the council’s head of cleansing operations, described the street as “the jewel in Glasgow’s public realm, but it requires to be cleaned to keep it sparkling”. Special low pressure, high temperature washing treatment is used on its Caithness stone and granite. The machine is “practically noiseless” because its diesel engine is insulated. Chewing gum is mechanically removed as part of a £400, 000 citywide programme. Eight to ten tonnes of waste are “lifted” every day, mostly from shops, after the 10am deadline for deliveries.

Stainless steel litter bins, originally provided as part of the public realm improvements, had to be replaces by more robust cast iron ones because their doors fell off and they were “not easy to empty”, McKergow told us. New litterbins, in a better design, are now coming in.

Rather surprisingly for a street that does so much business, there is an ugly derelict site at its northern end, opposite the stone-faced Buchanan Galleries – a 600, 000 sq ft shopping centre, which was designed in the early 1990s and is due to be renovated and extended.

Tom Murray, of BDP, said their Buchanan Quarter Development Framework would aim to ameliorate the “very inward-looking shopping centre” (aren’t they all?) and make the front of the Royal Concert Hall, which reads almost like an adjunct to the centre, “more visually open”.

At the southern end of Buchanan Street, architects Cooper Cromar are re-modelling St Enoch’s Square shopping centre by creating a new “entrance box” on the corner and a new stone-faced elevation to the square, which will have cafes spilling out onto a re-paved square.

With so much retail space, the ‘Lonely Planet’ guide described Glasgow as a “Shopaholic’s paradise”. David Ross, of Glasgow Chamber of Commerce, says retail is worth £4.5 billion per annum to the city’s economy and is part of Glasgow’s success as a “city brand”.