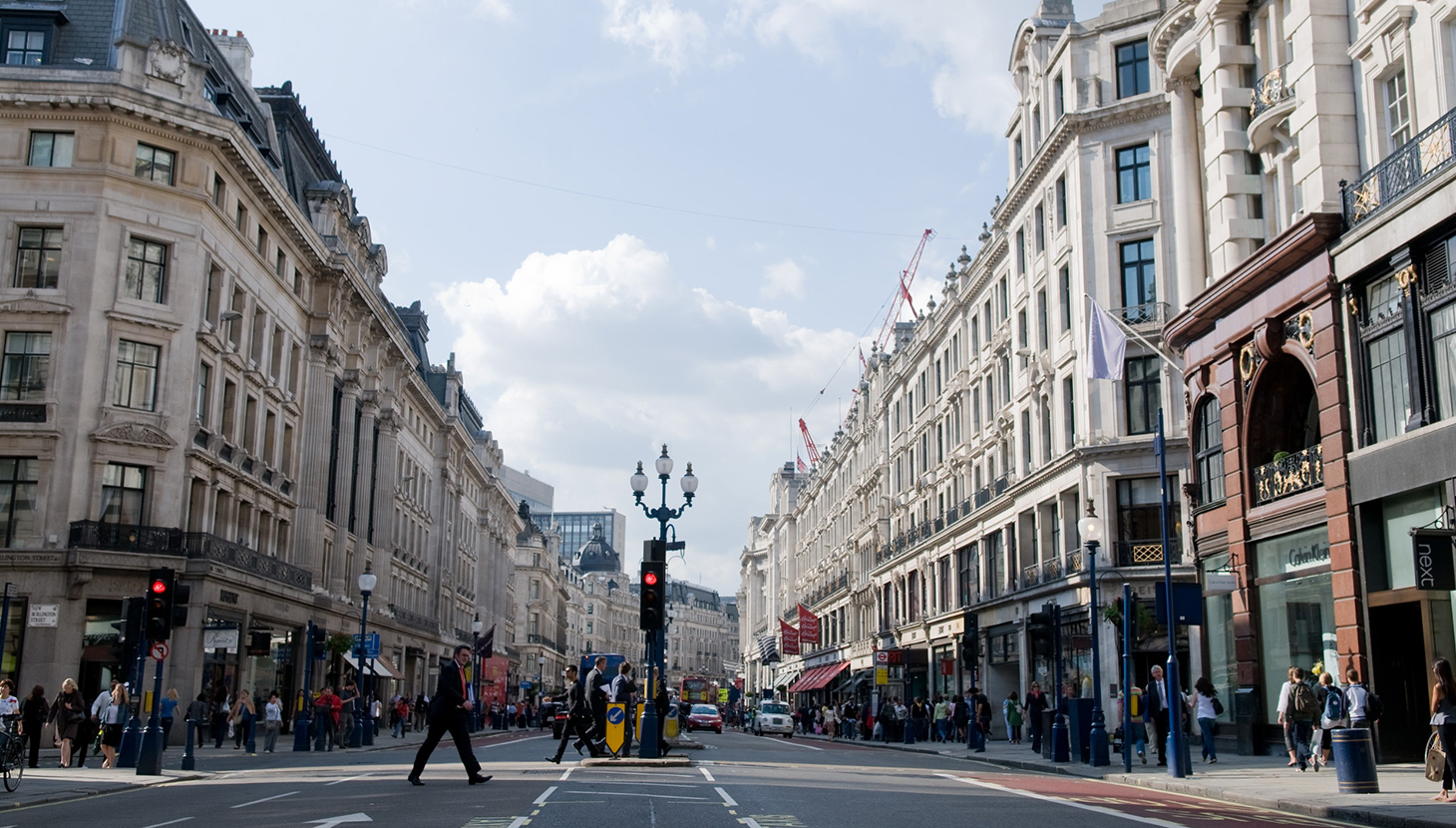 It’s the famous curve that defines Regent Street, as designed by John Nash. But not many people know that most of the buildings are post-Edwardian, rather than Regency, following an extensive rebuilding in the 1920s. The only work by Nash that survives is All Souls Church.

Originally designed as a shopping and commercial street, it was developed in the 19th century and redeveloped in the 20th century, on head leases. The Crown Estate merely laid down specifications for the facades, and these could cover up anything. It’s a stage set.

All Souls stands at the head of the street with the BBC’s new extension behind it. The other ‘event’ is Piccadilly Circus, where Regent Street kinks to run south to Waterloo Place and from where there is a superb view of the Houses of Parliament at Westminster.

Between Regent Park and St James’s Park, Portland Place and Regent Street run for a distance of 3km. Portland Place, designed by Robert Adam, still has most of its original buildings as well as the Langham Hotel (1856), which is said to be Europe’s first real ‘grand hotel’.

The Crown Estate began buying land in this part of London in 1670 and has freehold title to all of the properties on Regent Street and much of the surrounding area. This gave it “all the responsibility, but no power”, said David Shaw, its head of strategy and development. “With the head leases beginning to expire, we decided that the key thing was to get control, so that we could drive the whole process ourselves. We’ve done 10 schemes so far as part of a £500 million construction program. It’s a once-in-a-lifetime opportunity.”

The Crown Estate has also been taking a very pro-active approach to improvements in the public realm – a “team effort” that involves other stakeholders in the area such as the BBC, the City of Westminster, the New West End Company and the Regent Street Association.

The New West End Company runs the biggest BID (business improvement district) in Britain, covering Regent Street, Bond Street and Oxford Street, with a budget of £6million – half of it raised from the business community and half from the Mayor of London. “One or our successes has been to get so many public and private organizations on the same wavelength”, said Shaw, the company’s deputy chairman. “you can invest as much as you like in buildings, but unless you do something about the space between them it’s a waste of time.”

Ultimately, they are working towards realizing Sir Terry Farrell’s vision of creating a walkable boulevard, or ‘Nash Ramblas’. In the meantime one of the objectives is to get rid of the ‘cattle grid’ railings that surround Piccadilly Circus to keep pedestrians in their place.

At the lower end of Regent Street (that straight stretch running down to Waterloo Place) the aim is to transform what Shaw describes as a “pretty poor car park” into a “place for people”. There is already an annual ‘VIP Day’ – VIP meaning Very Important Pedestrian.

There’s a festival every autumn; last year, it had a Spanish theme and this year it’s Indian Places for eating such as Heddon Street are also being encourages, with traffic banned from it at lunchtime to allow outdoor tables to spill into the street, as in Barcelona or Paris.

Regent Street’s slogan, ‘Where time is always well spent’ relates mainly to shopping. In the past, the retail offer wasn’t very good, but it has been uplifted by flagship stores such as Aquascutum, Burbuerry, Hamleys and Jaeger, as well as a very busy Apple store.

With 45 new retailers brought in since 2002, there is a better retail mix, which makes the street more attractive. The four benchmarks used by The Crown Estate in selecting retailers are “quality, heritage, style and success” – and some aspirants have been rejected.

“We turn down people quite regularly”, Shaw said. “As with shopping centres, someone has to decide. We’re not a mass market big pedestrian footfall street, though of course the pay off for developing it would be higher rents, so its partly a commercial strategy”.

One of The Crown Estate’s more important schemes involves the former Regent Palace Hotel on Glasshouse Street, off Piccadilly Circus. With the exception of its corner pavilions, it is to be demolished to make way for a mixed use residential, office and retail development.

It is in these side streets, as architect Peter Heath explained, that you can see “the interface between the grand conception and the narrow grain”, often with the effect of turning them into mere service areas. So one of the objectives here is to “keep them clear of clutter”.

Glasshouse Street is to be re-paved in a big diamond pattern of granite setts and York stone, designed by Jeremy Dixon. However, the Regent Palace hotel use will be replaced by a new five-star hotel in the Café Royal building, which is now often used for auctions.

At the upper end of Regent Street, on Portland Place, the BBC is investing heavily in transforming the world’s first purpose-built Broadcasting House into digital a broadcasting centre. “It’s about re-investing the past for the future”, according to the BBC’s Robert Seatter.

The first phase of a new building, designed by Sir Richard MacCormac, has already risen up behind All Souls, Which is the only intact Nash Church in London. “One of the key aspirations is to create new public spaces, so there will be a World Piazza here by 2012”, Seatter said.