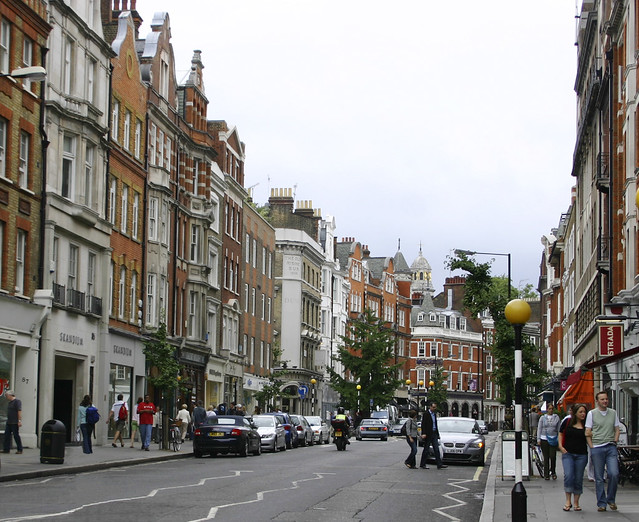 Walking along Marylebone High Street today it would be easy to imagine that this vibrant, bustling place has just grown this way organically. After all, this is a particularly nice part of London so it should have a particularly nice high street. But this reading of the street would be wrong. 12 years ago it was a shabby and neglected place, with many empty shop fronts and very little going on. The only thing Marylebone High Street had in abundance was charity shops. Some 10 years ago the Howard de Walden Estate, which owns much of the street, employed Andrew Ashenden as its new chief executive, and asked him to turn the street around. The story of how he did that, with the backing of the Estate’s owners, the four daughters of the late Lord Howard de Walden, is an instructive one. And it has produced a really great street.

Andrew had a vision of making Marylebone High Street into the centre of an urban village that the whole community would use and enjoy. Central to his thinking was to avoid the street being overrun by fashion chains and supermarkets but instead to base the street’s regeneration on attracting small local shops and services. Instead of a clone town high street there would be many and varied small shops providing for the community’s daily needs. Instead of immediate profit maximisation the Estate allowed a long term, sustainable regeneration process to emerge. This more enlightened and benevolent approach has been a resounding success in social and economic terms. Today that might seem a logical way to proceed but at the time in comparison with the way other great estates and London high streets were being managed it was extremely radical and innovatory. Andrew says his concept was to return Marylebone High Street to being a quintessential English high street. He established two anchor land uses – Conran’s Orrery to the north – by way of adaptive reuse in a derelict stables – and Waitrose to the southern end of the street. While Waitrose didn’t offer the most money Andrew liked its style. He then went out and ‘touted’ for the shops he wanted – those which he thought would contribute best to the social life of the street and the community. Some were attracted by peppercorn rents to come to particular sites. A particular focus was put on food shopping, consciously making Marylebone High Street a ‘foodie’ centre, and the estate also sponsors a farmer’s market which has made Sunday one it its busiest shopping days. Annual events run by the estate also contribute to community life – reinforcing the sense that Marylebone is a small village in a large urban space.

The street’s robust building typology, a fine grain of flats over shops, helps to reinforce its human scale, with a good level of enclosure helping make it into an outdoor room. It’s at once superbly connected into surrounding London through the legible and permeable Marylebone grid yet retains that local village feeling of being hidden away a little off the beaten track.

The MJHS area is a joy to walk around, with small scale surprises for the pedestrian provided by its active frontages, rich detailing and intricate scale at street level. Marylebone High Street might seem no more than a very pleasant place for affluent visitors but that would be to sell it very short indeed.

The area is considerably more diverse in class, income, age and ethnicity that attempts to stereotype its population would allow. In fact, the approach taken by Howard de Walden has emphasised the street’s inclusive social role and its sustainability. In economic terms it’s a success having helped the Estate markedly increase the value of their portfolio, in environmental terms its support for the small scale, the local and the organic is notable, and in social terms the street is a place all kinds of people want to be. From a dilapidated and dispirited past the high street has been developed into a thriving village centre for community life.

Marylebone High Street offers lessons in each of the assessment areas: Its governance has been outstanding – vision and leadership from the Howard de Walden Estate have made the difference between failure and success. Local character and distinctiveness – Marylebone High Street provides a unique sense of place that has been nurtured by careful and sensitive development practices It is an extremely user friendly place – with one of the lowest crime rates in London, where people feel safe, and clearly enjoy living, working, visiting, socialising and shopping. It has achieved a very high level of commercial success and viability – by ignoring the supposed logic of the market and instead shaping demand by a more subtle, long term approach to economic viability.

The street demonstrates a high degree of environmental and social sustainability – working with its historic building typologies and spaces to avoid the sustainability problems of clone town high streets and creating a convivial, inclusive place in the process. Marylebone High Street exhibits an excellent level of functionality – its permeable, legible and well connected, rewarding walking and cycling as the most pleasurable way to enjoy the experience of being in this ‘slow city’ kind of place.