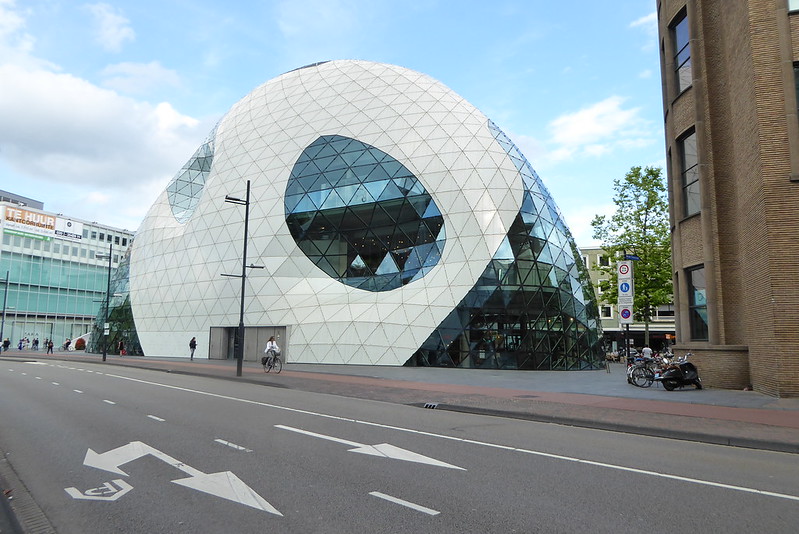 1. Reinventing former industrial cities
Eindhoven is an excellent example of how former industrial cities can reinvent themselves positively when their main parent/benefactor company has gone; and do so competitively and in a remarkably quick timescale if they are pragmatically ambitious. Many other cities in the UK, Europe and the US have struggled to do this.

2. The power of consistent, committed & visionary leadership
Eindhoven is a great example of how consistent, committed and visionary leadership, combined with pragmatism and determination, can achieve remarkable results in a relatively short space of time, when embedded through all layers including staff, citizens and businesses (the ‘Triple Helix’/ ’Multi-Helix’ approach). The unity, team-work and enabling culture this created was very apparent and inspiring.

3. Exploiting the potential of high-value knowledge sectors
Eindhoven is an exemplar of the immense power & value of openly sharing, harnessing & capturing the synergies created by high-value knowledge in academia, industry and citizens; and how this can then be applied for both commercial (macro) and societal (micro) benefit.

4. Creating high quality yet attainable living environments
Eindhoven has worked hard to reinvent its former image as a grey, boring industrial city by creating a range of high-quality yet affordable living environments – especially created housing of all typologies and for all tenures and socio-economic levels, through combined creative re-use, upgraded stock and new-build.

5. Confidence in non-traditional city evolution
Eindhoven has placed great emphasis on experimentation and testing/piloting new ideas without spending huge amounts of time & energy trying to justify that they will work – radically different to the rigorous ‘forward planning’ approach in the UK and other European countries.

Eindhoven is the 5th largest city in The Netherlands, with a population in 2016 of 224,755, in a metropolitan region with a population of 753,426. It was given city rights in 1232, but for centuries was a relatively poor & humble agricultural centre where cooperation and self-sufficiency was essential for survival due to multiple sieges & occupations up to 18th Century.The industrial revolution in the 19th Century saw establishment of textiles and tobacco industries in the city, plus supporting canal and road-links to other major Dutch & Belgian cities. Yet its population was still only around 10,000.

The establishment of the Philips company in 1891 transformed the city. It grew quickly and built a series of huge factories across the city; in 1928 it was joined by the new car & truck manufacturer DAF. Philips had a strong tradition of patronage of its workers: it developed extensive housing for its workers which was far superior to other housing at the time, and provided free employee social and sports clubs, parks, health facilities, schools, theatres, etc. Expansion of the city was pursued in line with Ebenezer Howard’s ‘Garden City’ principles, with ‘green fingers’ stretching into the city. Just before the outbreak of the Second World War the population reached just over 103,000. The city was occupied by German forces during the Second World War, badly bombed by Allied forces and further damaged by the battle to liberate the city in Sept 1944, so lost almost all of its few remaining historic buildings.

By the 1950s population was over 200,000. At their peak Philips and DAF provided over 60% of direct employment and over 30% of indirect employment in the city, but this made it vulnerable during the global industrial restructuring of the 1970s and 1980s, leading to contraction and job losses. In 1993 DAF went bankrupt; this was closely followed in 1997 by the shock news that Philips was moving its headquarters to Amsterdam and relocating almost all manufacturing overseas. Almost half of the city’s jobs instantly disappeared. Philips retained a small R&D presence, but left a pool of several thousand of highly-skilled engineers and researchers at a loose end – which turned out to be a key asset for the city’s rejuvenation.

The city Mayor and the leaders of the main companies and Technical University came together to propose what became known as the ‘Triple Helix’ approach, with the aim was to reinvent the city and simultaneously tackle its ageing infrastructure & technology. All 21 municipalities in the region joined and contributed to a Regional Stimulation Fund, which was matched by EU funds. The city was mature enough to retain a good collaborative working relationship with Philips – a factor which bore fruit much later on, as collaborative spin-outs such as ASML are now financially as big as Philips was in the country in its heyday. The ‘Triple Helix’ recognised the latent commercial potential of the city’s University of Technology and Design Academy in product design and associated technologies: multiple partnership programmes were established to help commercialise its R&D, with a particular emphasis on joint product development platforms; business incubators (such as High Tech Campus Eindhoven); and exceptionally high levels of inter-industry cooperation. Many initiatives were not led by the municipality, but by the business community (eg. Brainport Eindhoven) – a factor which the city feels now has been key to its success.

Nowadays a third of all Dutch R&D research investment is made in Eindhoven and it accounts for one-third of The Netherlands’ exports. A quarter of jobs are in technology, ICT and biomedical technology. The city’s highly-regarded Design Academy (a specialist technical HEI) had led to it being recognised as a global design capital. ‘Dutch Design Week’ now draws 275,000 visitors to 80 venues annually from all over the world. The city is also exploiting its technical innovation strengths more directly too eg. experimenting with locally-developed clean technologies to decontaminate former industrial sites such as Strijp S.

The current Mayor feels it is imperative to constantly review & update strategy because of the fast pace and disruptive power of technological development; he is also focusedon ‘doing things, not just talking about them’, and staff being given the freedom to experiment. It is now countering traditional ‘top-down’ municipal models, and wants to be a servant to society to help citizens develop their own spaces & services and create their own solutions – as expressed in ‘the Eindhoven Formula’:-

The municipality is the second (after Helsinki) to use social designers extensively across Departments and on neighbourhood-focused initiatives. It looks outwardly too in its efforts to enhance the quality of living environment, and is currently collaborating with many cities globally plus companies such as Google and Ikea. Communal action at a micro-level is encouraged too: eg.students are offered discounted social tenancies in return for mentoring local schoolchildren.

In less than 20 years the city has transformed itself into a vibrant city of open technologically-driven innovation and positive collaboration. It has worked hard to reverse perceptions of it being dull, functional and industrial compared to some of its competitors or nearby cities with attractive historic fabric eg. Den Bosch. It has developed a range of high quality value-for-money living environments for all demographic segments, often in public-private partnerships. It promotes the advantages of it being a medium-sized city where ‘Nature is just a short bike ride away’, with a cost of living far less than other Dutch or European cities. Blue and green infrastructure has been enhanced or extended, and immovable 1950s/60s infrastructure has been softened by creative lighting or public art (eg. the Monty Python ‘Silly Walk’ underpass, which has since become a tourist attraction). Citizens are encouraged to curate enlivening of shared city space, eg the 25 ‘Happiness Spaces’ across the city. The cultural offer has been enhanced by festivals such as GLOW and Dutch Design week, and modern expansions of existing facilities eg. Van Abbemuseum.

As a result of this population growth has been rapid, at around 10%/pa. The city centre population 10x greater than a decade ago. 32% of residents were born outside of the Netherlands, from 153 nations. Newcomers also include Eindhoveners returning to the newly-vibrant city. Many incomers want to stay and have families in the city, which the city have anticipated and are expanding/upgrading both Dutch and international school-age education provision.

Eindhoven is not without its problems however. Whilst its recent rejuvenation has in many ways been remarkable, it still needs to work smarter to compete for globally-mobile talent with cities like Berlin and London. Rapid population growth has put a strain upon housing and education (both supply and quality of provision) and on local & regional transportation networks (notably railways, which the city find hard to influence due to them being nationalised & centrally-run). Rapid immigration-driven population growth also makes it hard to maintain cohesive communities, and it has been hard to overcome locally-engrained tenets re: defensible space & privacy. Creating and sustaining work opportunities for the less-skilled citizens is also a challenge: at 12% unemployment rates are over double national rates (5.8%), and long-term rates have stubbornly remained around 5.2% even though the city has created over 30,000 jobs in the past 15 years. Unemployment rates are particularly high in the over-50s age group and the under-20s(with the latter having their own a ‘Youth Employment’ ambassador since 2013). Crime was a particular problem throughout the 2000s, with the city until 2014 often having the highest rate of crime in The Netherlands (it is now 6th-highest).