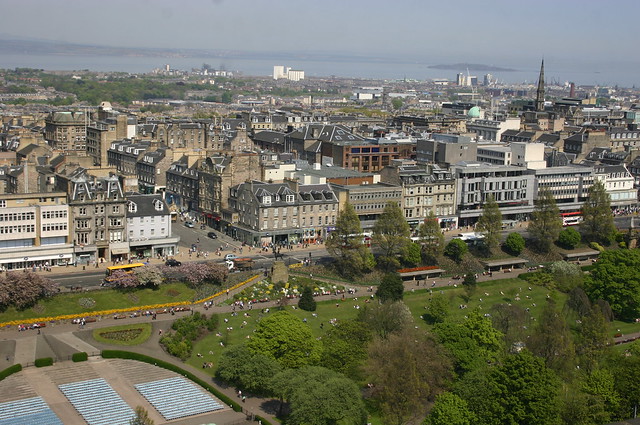 Edinburgh is a strong candidate for the Academy’s City Award.
The assessment panel were provided with strong evidence of the progressive thinking which is being applied to both protecting and enhancing the distinctive character of the city’s urban environment and accommodating the existing and future needs of the city’s residents, businesses and visitors. The ‘wheel of urbanism’ diagram below summarises the Panel’s assessment of the performance of Edinburgh against the principles of the Academy.

Edinburgh City Council is working hard to promote long term strategic thinking. As capital of Scotland, there is a range of stakeholders with an active interest in planning, design, implementation and maintenance.

The City Council has taken the bold step of appointing Terry Farrell to act as design champion for the city. Through his involvement and that of the Council’s urban design unit considerable attention is being paid to the evolution of key parts of the city. In this respect the City Council is seeking to guide rather than respond to the development pressures facing the city as it seeks to accommodate employment and residential growth.

The local character and distinctiveness of Edinburgh is outstanding. The city has a stunning sense of place, identity and cultural resonance.

Edinburgh benefits from its association with Scottish urban culture. As the nation’s capital city it possesses iconic buildings and an urban form based upon high-density living that reflects the distinctive historical characteristics of the city. Today this tradition is continued through the strength of the city’s cultural and educational institutions and the power of the place to attract people from outside. The events associated with Edinburgh – Hogmanay and the Festival serve to reinforce this combination of local tradition on a world stage. This is a City with a real sense of drama and performance that is rooted in a distinct and enduring local culture.

The city has more than its fair share of dramatic landscape and distinctive and well-planned streets and buildings. The stone built tenement emerged in Edinburgh and introduced high-density urban living to the UK. It also embraced the planned urban extension – the New Town which is the largest collection of Georgian buildings in the UK and is reflected in the city’s designation as a World Heritage Site. However alongside high-density living are superlative green spaces of varying characteristics. This makes Edinburgh a green city that is now discovering its waterfront to add a further dimension to what must be one of the most distinctive cities in Europe.

With such a rich tradition urban fabric the city faces an enormous challenge in seeking to both protect its heritage and accommodate pressures for growth and development. The rapid westward expansion of the city in recent years is now being counter balanced by the development of modern city centre office floorspace to accommodate the requirements of the financial services sectors. Elsewhere attempts are being made to create new and attractive residential environments along the waterfront.

Edinburgh is a highly successful city where people want to live, work, and visit.

The city continues to attract and retain people of all ages. The strength of Edinburgh’s higher education institutions and of its public and private sector economy attracts and retains young people to the city. It remains a great place to bring up a family and the elderly do not appear to desert the city which is a testimony to the availability of a good range of services including public transport.

Edinburgh is a great city to walk in. Its urban core is compact and easy to read and its streets are lively and usable. This is a reflection of the high-density urban living of tenements and Georgian urban form which supports a wide variety of uses.

The level of activity generated by Edinburgh’s urban form and density promotes a high level of activity in its streets and public places. This reinforces self surveillance and communal living epitomised by the tenement stair.

Edinburgh enjoys enormous richness in the parks and open spaces it offers to residents and visitors alike.

Edinburgh’s economic prosperity is founded on its role as a centre of government, financial and business services and tourism and leisure. The growth of major new business parks such as Edinburgh Park and the HQ of the Royal Bank of Scotland at Gogarburn on the western fringes of the city has responded to the needs of modern business as has the Exchange District clustered around Lothian Road.

The City is acutely aware of the differential of opportunity that exists across the city with disadvantage being concentrated in the peripheral estates of Pilton/Muirhouse, Craigmillar and Wester Hailes. Active programmes are in place to try to tackle the fundamental and deep-seated obstacles to employment and opportunity in these areas with varying degrees of success. This is not helped by the physical, social and economic segregation that is a feature of the way in which the city has developed and operates.

The City recognises the commercial and investment benefits which can flow from proactive urban policies and programmes. Increasing the city is trying to take the lead with the creation of a positive design framework to guide rather than follow private sector investment.

The environmental performance of the City appears better than its social sustainabilty. Despite developing city forms which contained strong elements of social mix and cohesion the subsequent development of Edinburgh led to significant social segregation which has tended to reinforce disadvantage in terms of access to social/cultural and economic opportunity.

A strong feature of historic Edinburgh is its response to the local topography – and its use of local building materials. In this respect it is very much at one with its setting and local environment.

The emergence of new development areas to accommodate both employment and household growth has been a strong feature of the city in recent years. However it has maintained its coherence and scale through the application of Green Belt policies. This has promoted the redevelopment and reuse of land and buildings, however it has also resulted in the development of less sustainable patterns of transport with the growth of in commuting from surrounding areas e.g. Fife and West Lothian.

While Edinburgh has an extremely successful system of bus transportation and pursues policies aimed at limiting the use of the car, there is less evidence that the city is at the forefront of policies to promote renewable energy and waste recycling.

Edinburgh is a city that works well with a clear hierarchy of urban functions tied together by an effective public transportation system.

Notwithstanding the challenge of its topography the urban core of Edinburgh provides a clear and legible network of streets and public spaces that reinforce a distinctive mix of functions and uses. Outside the city centre the strong radial pattern of routes link a hierarchy of district and local centres serving clear urban neighbourhoods.