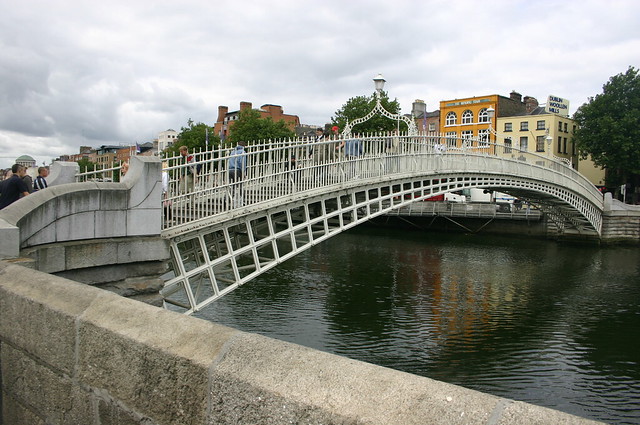 Dublin is a strong candidate for the Academy’s City Award.

The Assessment Panel were provided with strong evidence of the forward looking approach which is being developed by the City to creating a sustainable 21st Century European city. From a difficult starting point good progress is being made in accommodating the demands of a dynamic economy whilst maintaining and the distinctive character of Dublin as a place to live, work and visit. The ‘wheel of urbanism’ diagram below summarises the Panel’s assessment of the performance of Dublin against the principles of the Academy.

A strong vision for Dublin is being promoted based on the city being developed on the European model. Grand projects are being pursued and significant densification of the city is being promoted. This is being led by a strong City Council. However there are a wide variety of other players involved e.g City Development Board, the Docklands Development Authority, and Government itself. The challenge is to ensure a joined up approach across all of these agencies.

In particular areas, especially those suffering from deprivation, task forces have been established to drive forward regeneration. Consultation and community engagement sits at the heart of these initiatives. In the Docklands, planning powers sit with the Development Authority and development is appears more market than community led despite efforts to engage local people.

The people of Dublin are interested in and on occasions vociferous in debating local issues affecting the built environment. As with any decision making process one can question the extent to which the community has influence. Indeed there needs to be a balance between civic leadership and community power.

The uniqueness of Dublin stems from its location on the River Liffey, and its urban core which contains strong and recognisable elements – the Georgian City, the Temple Bar, the Castle and Grafton Street. By comparison the city’s suburbs are of indifferent quality and the new development springing up in the Docklands has failed to establish a particularly distinctive Dublin character.

There is no doubting the influence of Irish culture on social structures. Whether it finds physical expression in Dublin is perhaps more debatable. This may in part be a reflection of the roots of Dublin as a British rather than an Irish city. However the animation provided by residents who celebrate living in the City makes Dublin a vibrant place.

Dubliners use their city as a place to meet, eat and greet. People are at the heart of the city and the city’s parks and public spaces are well used. However Dublin is a messy city and would benefit from greater care and respect for the built environment.

There is a significant contrast between the approach adopted by the public sector which adopts a high and distinctive standard of design in new public buildings and spaces and the private sector who have tended to produce commercial and residential buildings which are not particularly sensitive to their local context.

Dublin has in recent decades established itself as a place where people want to live and work, visit and enjoy. This has produced enormous pressures for growth which represent a real challenge for the city.

Pressures for growth in Dublin and the availability and cost of housing has led to a significant outward movement of population beyond the city boundaries into the Greater Dublin area. Efforts are now underway to maintain and grow the city’s population through intensification and the introduction of apartment living for families. Delivering this poses a considerable challenge given traditional housing preferences.

While Dublin has a number of pedestrianised areas e.g. Grafton and Henry Street and has improved the environment alongside the Liffey and in O’Connell Street, much of the city remains dominated by road traffic. As a result the quality of the street and public environment is patchy.

The city’s culture has evolved over the decades from one dominated by the pub to a more European-style café society. There are attractive clusters of activity both in the city centre and district centres which promote civilised behaviour but as with many cities there can still be a threatening edge created by alcoholic excess.

The phenomenal success of the Irish economy in recent decades has been heavily dependent on success of Dublin . There has been substantial public and private sector investment directed towards improvement of the urban environment. While some of this has been of indifferent quality, greater attention is being paid to upping standards of design to create a 21st Century European city.

The development of the Dublin economy has involved the attraction of international business investment and the creation and development of indigenous firms. The city can accommodate companies of all size and at differing stages of development. While this has perhaps been less to do with the quality of the urban environment it has added huge dynamism and vitality to the city.

As with many cities the challenge is to ensure that employment and economic opportunities are open to all citizens. The City Development Board has put in place a Social and Economic Strategy to try to achieve this and there are active programmes aimed at assisting the most disadvantaged communities in a city that demonstrates large divides.

Dublin is trying to raise its game through investment in the improvement of key public spaces e.g. St Stephens Green and streets e.g O’Connell Street. Elsewhere the city is seeking to mend the urban fabric where it has been damaged and is providing a clear lead to the public sector in setting demanding standards of design. There is some evidence that developers and investors are responding to this agenda although this is by no means universal.

The City is making substantial efforts at promoting sustainability -environmentally and socially. Considerable progress is being made although the City has come from a long way back.

The city has suffered historically from social division – between areas of public and private housing and through the creation of large peripheral schemes such as Ballymun. This has served to reinforce disadvantage. Considerable efforts are now being made to address this through housing and estate regeneration programmes supported by social and economic interventions. Early signs are encouraging but long-term outcomes remain uncertain.

The River Liffey both divides and unifies the city. The redevelopment of the Docklands and the introduction of new river crossings have drawn people back to the riverside. Man made (e.g. brick) rather than natural materials predominate but the presence of strong open spaces allow the Dubliner to connect with the natural environment.

Dublin has proved itself to be an adaptive city. Its historic core remains largely intact and the city has been spared from the worst ravages of highway engineering. Major new uses have been accommodated through the reuse of brownfield land. However the city has experienced major outward growth of both housing and employment. However Dubliners still look to the hear of the city for many of their needs.

The city faces considerable challenges in moving from car domination to the fully integrated public transport system. Considerable progress has been made but more needs to be done to roll back reliance on the car. Elsewhere the City has introduced charging for waste collection and is actively promoting recycling. The active promotion of renewable energy sources appears less well developed.

Dublin is still a city of streets which provide a coherent and interconnected grid. The problem is that the streets are for the most part dominated by road traffic that reduces their quality and utility for other activities. The city centre remains the key central place for most high order functions. Elsewhere district centres fulfil more local needs although these are of variable quality and accessibility.

Dublin is actively promoting walking and cycling and has invested heavily in mass transit and bus services. However Dubliners remain strongly attached to their cars and the city environment is dominated by road traffic. This reduces the attractiveness of the city as a place to walk (except in pedestrianised or improved areas) and cycle. Thus while much progress has been made there is a lot more to do in transport terms.

The city centre is the dominant focus for civic and cultural activities and contains around one third of the retail floorspace. Elsewhere a necklace of district centres serve the residential communities that make up the city. These are of variable in quality and functionality often reflecting the social make up their catchment.