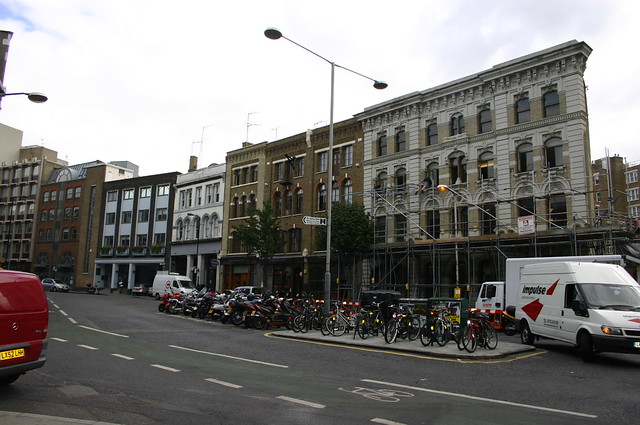 The clearest expression of a collective vision for Clerkenwell is to be found in the UDP which seeks to “preserve and enhance the special character of the area”. There is no dedicated body or agency for Clerkenwell with any special responsibilities, but the UDP aims to achieve this objective reflecting, at least in part, the interests of others e.g. Clerkenwell Green Association’s aim to promote fine craft and design skills in the area. There is evidence that enhancements to the public realm involve inclusive processes e.g., proposals are explained and comments invited upon them, by information boards on site.

There is strong evidence that the culture of local people (residents and businesses) is expressed in physical and social structures: a wide range of residential accommodation exists in the area (flats/houses) with a wide range of tenures. One local businessman applauded the “stock of misfit buildings” as essential to the life and character of the area. Socially, many interest groups exist (Business Junction, Clerkenwell Green Association, etc) and events are held regularly e.g. the Clerkenwell Bienalle. Public Art is in evidence including temporary installations such as “Oxygen” at Clerkenwell Green.

Clerkenwell has a strong sense of place that is reinforced by local authority policy and the activities of local interest groups. The area builds on its significant heritage and developments, including some public realm improvements, are influenced by this context, which has proven particularly attractive to design professionals (e.g. Clerkenwell Workshops). The Clerkenwell area has several areas of distinctive character, from the predominantly business areas to the south, to the quieter residential areas to the north. Both display distinctive qualities and contribute to the overall character of the area. Exmouth Market provides a fulcrum connecting the two areas.

With its wide range of housing type and tenure, Clerkenwell attracts people of all ages for living and for work. The area is highly accessible (within the sector bounded by Farringdon Road, Crosswell Road, Cowcross Street and Pentonville Road) and some parts of the neighbourhood are particularly vibrant with active frontages, notably Cowcross Street, Clerkenwell Green and Exmouth Market.
The urban environment for the most part supports natural surveillance. This is limited in certain areas by constraints posed by historic buildings – part of the character of the area – although some are of a “warehouse” nature with limited public frontages and a more forbidding character in the hours of darkness. However, this is counterbalanced by the civic pride and investment in the area that encourages civilised and responsible behaviour.
Located on the edge of the City of London, public parks are limited, but a wide range of parks and spaces lie within easy walking distance including the Inns of Court. Clerkenwell Green has recently been refurbished and lies to the south of Exmouth Market. The area has a substantial number of mature trees, especially in gardens and churchyards.

Commercial activity is successfully encouraged and there are several examples of recently completed projects e.g. Clarkenwell Workshop. There is no evidence of a pro-active programme to create employment. Rather, planning policy seeks to foster a range of employment opportunities. Local businessmen suggest that the economic success of the area has occurred in spite of local authority policies from the late 1970s through the 1990s. But the success is now fostered and embraced in policy. The growth of the design industries is promoted actively by non-governmental agencies such as the Clerkenwell Green Association.
Planning policies aimed at protecting the character of the area are cited as reasons by local businesses for investing in the area. The image and quality of space is seen as particularly important to the creative industries. This sense of identity is also important to the service industries – restaurants, etc. – that seek to provide an image appropriate to their clientele.

It proved difficult to investigate environmental and social sustainability, but there is some evidence of a re-cycling policy. There is however, evidence of an active “cultural” life that makes use of public space and displays pride in the character and history of the place.
Clerkenwell has a clear and inter-connected street network with local areas (Clerkenwell Green and Exmouth Market) which act as foci for social interaction. Clerkenwell is well integrated into London’s transport system with ready access to buses and tube systems along all surrounding streets. Within the neighbourhood, the area is very accessible on foot. but the lack of traffic management arrangements promoted by the local authority means that traffic often moves at a speed that is greater than desirable within a walkable neighbourhood.