Written by Louise Dredge of The Glass-House Community Led Design and member of the YUs. 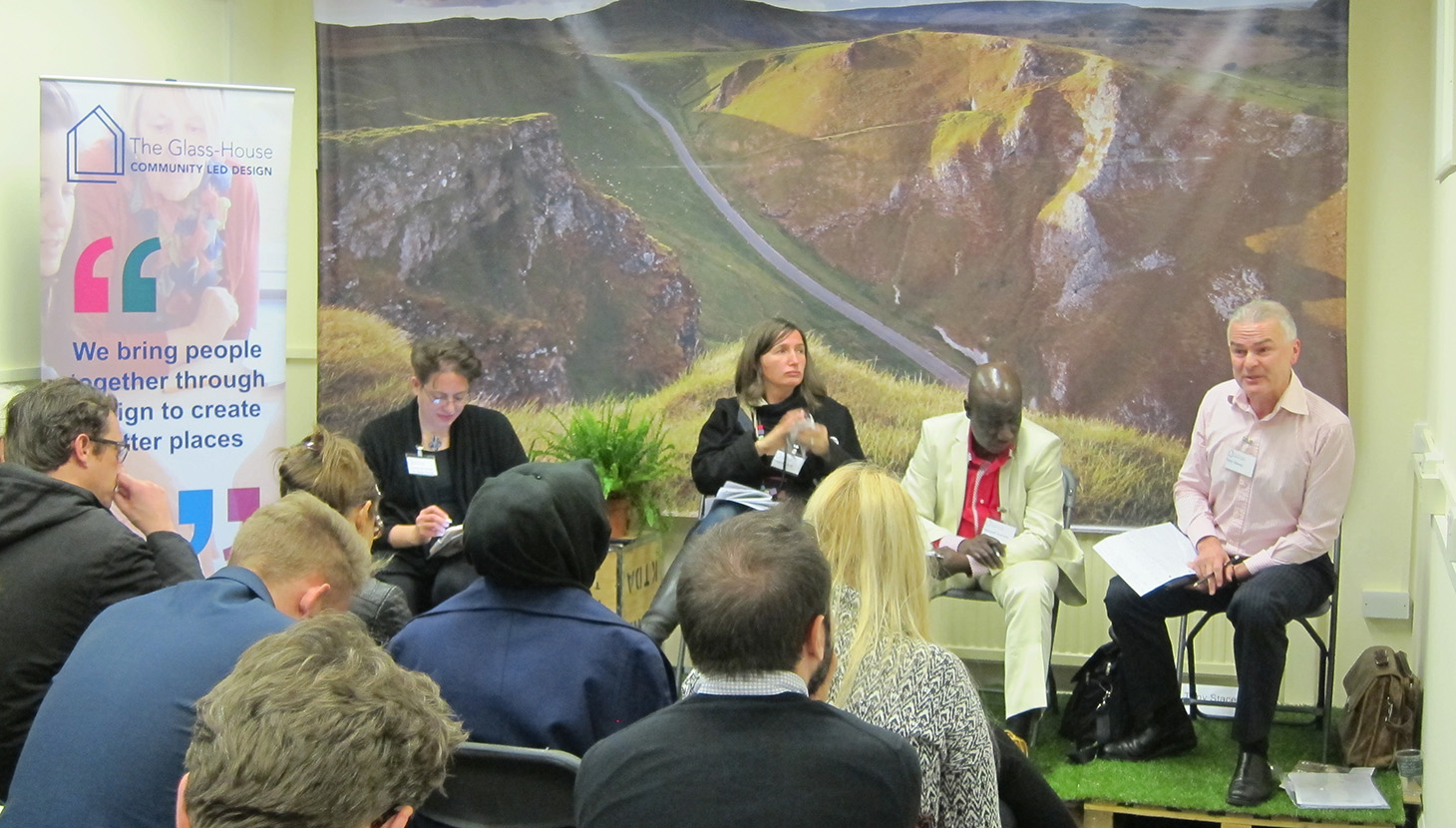 On Wednesday 19th November, we were honoured to be the inaugural event in one of Sheffield’s newest cultural and creative assets – The Roco Creative Co-op. This innovative project led by Andrea Burns and Chris Hill will transform a row of empty Georgian houses into a new hub for the creative industries in Sheffield, hosting work spaces, exhibitions, events, a café and other facilities for Sheffield’s creative citizens.

We were there to discuss the challenging question – do the right people have power in place? Who should have power when it comes to how we make and shape our places?

Our first speaker was architect, educator and researcher Cristina Cerulli, who works at Sheffield University and is Director of social enterprise Studio Polpo. Cristina spoke passionately about the lack of awareness of the different ways in which people can take action in place and called for a civic governance curriculum which would help to empower people to participate in shaping their places. Cristina cited Gloria Steinem in her five-minute provocation: “Power can be taken, but not given. The process of the taking is empowerment in itself.”

Maxwell Ayamba, an environmental journalist and Project Manager at SHEBEEN (Sheffield Black and Ethnic Minority Environmental Network) shared a critique of the government’s Big Society policy, arguing that the necessary conditions for its success were not part of the support that the government provided through the 2011 Localism Act. Charities supporting community initiatives have been forced to close as funding disappears, while local services are being curtailed or cut completely, leaving communities with fewer resources to support their active participation in place. Maxwell was also critical of the fact that the power mechanisms provided through the Localism Act rely on people volunteering their time and resources to affect change in place – how can people be expected to do this when they are struggling to make ends meet?

Tony Stacey, Chief Executive of South Yorkshire Housing Association and Chair of Placeshapers (a network of 100+ community-focused housing associations) argued persuasively that what places need is fit-for-purpose local organisations that will make things right for people in those places. He cautioned against a trend for merging large place-based organisations, which can lose sight of what makes different places unique and special, and he compelled other service providers to invest in personalisation of their services that supports people and enhances their health and wellbeing. Tony also advocated for the value of stories, of people talking, sharing and making together. Reports won’t change things but the voices of people will.

Our Sheffield audience introduced many more questions to the debate.

Where are local government? One audience member felt that little could be achieved without the ear of local councillors who hold most of the power when it comes to decision-making about the shape of our places. ‘We need to get it right at the top’, he asserted. However, Justine Gaubert of Silent Cities shared the work of Theaster Gates, a Chicago-based artist whose place-based engagement with the public demonstrated that local government can support others to creatively engage local people in placemaking, and don’t always have to be leading and facilitating these processes themselves.

What motivates us to participate? Crisis can be a strong motivator and mobiliser of people taking power in place, as was the case with local community Burngreave who have come together to save their local library from closure: ‘If you care about something you will run the mile.’ Another audience member felt that discussions like our debate can help bring people together in places and encourage them to do things together. When people feel invested in a place they are more motivated to engage with placemaking, unlike transient communities where people are often less likely and able to participate. A voice from the audience reminded us that we all individualistic in our nature but that in the right situation, where people share a common goal or concern, the power of community is immense.

Our speakers were invited by Chair Sophia de Sousa (The Glass-House Chief Executive) to leave us with a closing thought. These were:

We need to work within the system to support it and to change it. (Cristina)
Everyone has skills and abilities that can be unearthed and enabled to share power in place (Maxwell)
We need to seize new opportunities as power is devolved to regions and cities and create spaces for young people and children to contribute ideas, knowledge and action. (Tony)
“The ability to lead can come from anywhere.”

To a More Ambitious Place, The Glass-House Debate Series 2014/15 continues, with debates in Bristol and London in early 2015.