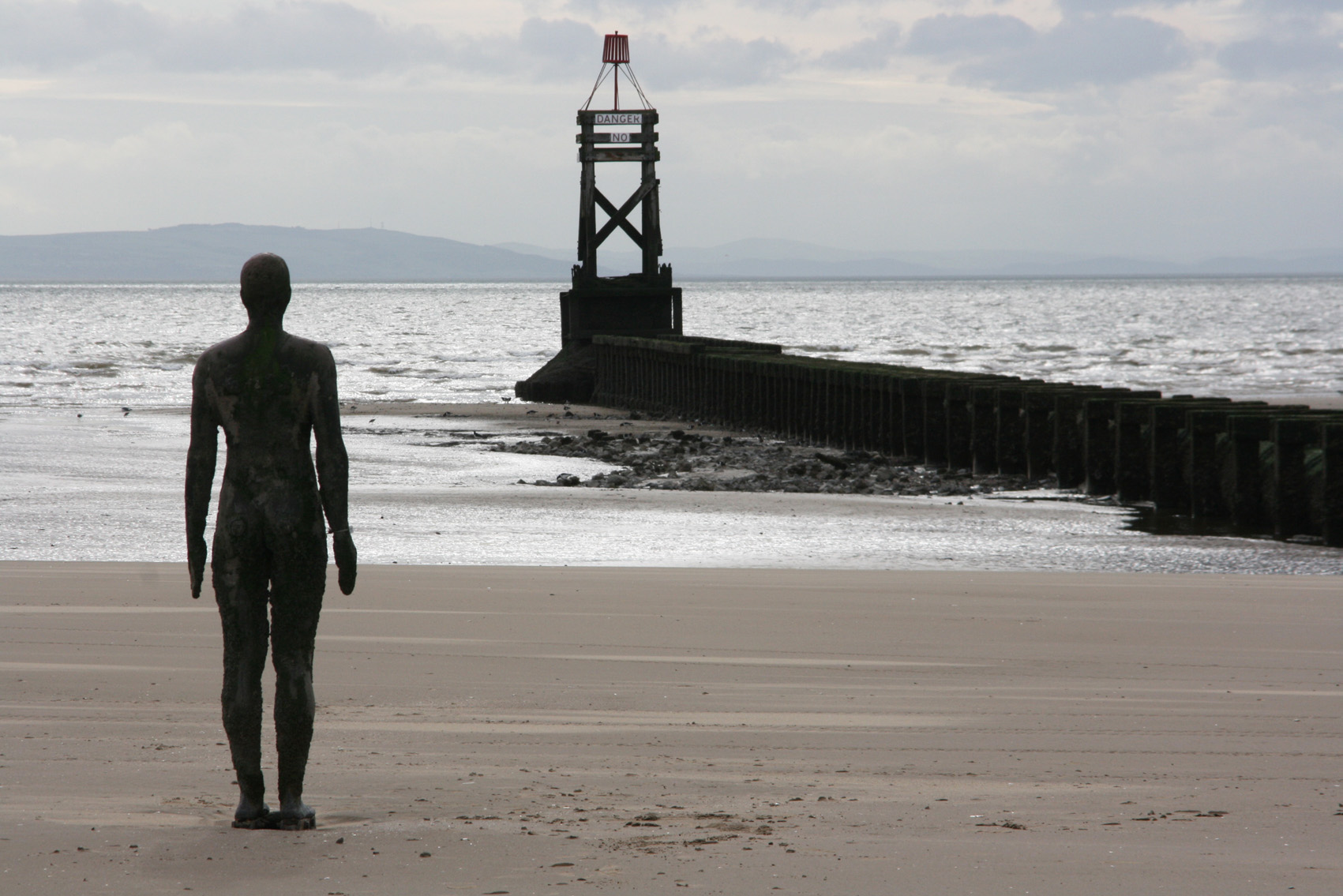 The extraordinary thing about Another Place is that it is not the sort of project that would ever have come out of consultation or the workings of a partnership. Art doesn’t work like that. If the partnerships of Sefton had been asked to approve the installation of the piece in advance then the various interests, the bird lobby, the ecologists, the wind surfers etc… would have said no.

The work is the result of two pieces of inspiration. The first by Anthony Gormly in creating the work and the second in the decision to site it in Sefton. The piece which consists of 100 life size figures cast in iron had been created as a touring work. Before coming to Sefton it had been displayed in Scandinavia, Germany and Belgium. However the work came to life in the harsh light of Sefton where the industrial presence of the dockyard cranes and offshore wind turbines meet the austere presence of the windswept Sefton coastline. The figures are placed along a half mile stretch of beach stretching from the high to the low tide marke. Some are so far out that they are submerged for much of the time and are already encrusted with barnacles. The rising tide consumes most of the figures to be revealed again once it goes out.

Another Place so clearly worked in Sefton that from the moment of its installation it seemed inconceivable that it should ever go anywhere else. That is not to say that keeping it was easy. The battle to make the piece permanent was hard fought and the battleground was the planning system. Many of the groups who were uneasy about the temporary installation became outright hostile to the idea of making the piece permanent. There were very real concerns about navigational safety, about its effect on bird breeding grounds, about the ecological impact of more people being attracted to the beach and the safety implications of them being encouraged onto the mud flats. The initial temporary planning application to extend the life of the piece was in fact refused. It was only the outcry against this decision that caused a permanent consent to eventually be granted. This consent is wrapped in conditions and safeguards but it was undoubtedly the right decision.

The result is an extraordinary ‘place’. It is all the more extraordinary because, while the people of Liverpool loved Crosby beach it was hardly somewhere that people elsewhere would have visited. Another Place has promoted it from nowhere onto the cover of Northwest tourism brochures. It has turned a relatively nondescript piece of semi-industrial coastline into a place that people travel from all over the world to see. The amazing thing is that, while it is true people come to see the work, what they experience is the place – which is why the name Another Place is so appropriate. The work allows people to look at the beach in another way, not as a poor cousin of the sandy beaches further up the coat at Southport and Blackpool but as a hauntingly beautiful place in its own right.