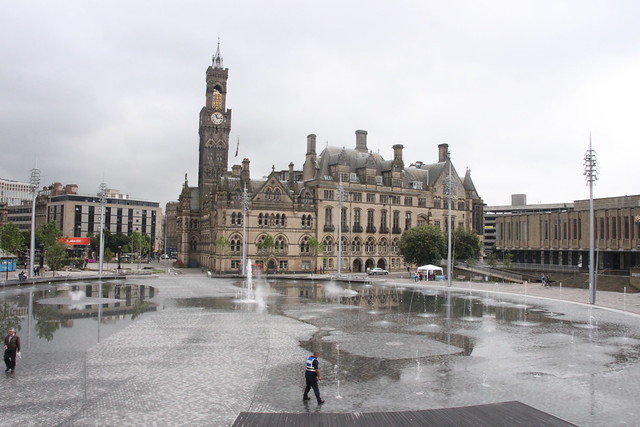 The City’s team have shown extraordinary tenacity to navigate through the snakes and ladders of funding and refused to abandon hope when grants were not forthcoming. The project was difficult to deliver in the good times of the noughties so beware anyone embarking on such a project in the current economic climate

The Park has a wide array of users throughout the week – the elderly, families, office workers, teenagers, students and tourists. The Pool’s infinite array of water effects is a delight to watch especially the sequences that detect and follow passers by

The City has a hands-off approach and the site team only intervene if behavior risks damage to users or the facilities. The programme of events in the Park is evolving as its potential is appreciated and it is on course to achieve the City’s ambition of Bradford people becoming ‘tourists in their own city’

It is not cheap to bring about change on this scale. However the £24 million headline figure is misleading as it includes major infrastructure rearrangement of roads and utilities

The original idea for a huge lake around the City Hall was the spark that caught the City’s imagination. It is counter intuitive to demolish city centre buildings to build a park but it has created a new soft centre that has transformed civic morale and attracted investment into the city centre

The city park in Bradford is an extraordinary place. The academy members who arrived for the assessment visit did so with no great expectations. Many places after all have installed water features in recent years and the technology is such that they are all very impressive. But Bradford City Park – or ‘Bradpool’ as local people have started to call it – is different. It is urban theatre on a grand scale and like the neighbouring Alhambra Theatre, the attraction is not so much the stage set, impressive as it is, but the actors.

So successful has been the pool that Primark regularly sells out of socks and towels at the weekend. On the overcast Monday morning of the Academy visit it gradually filled with people as the pool filled with water over a five hour cycle. And these were all the people of Bradford, youths on bikes, elderly people, women in burkas, students, families – a happy, relaxed mix of people rarely seen in British cities (other perhaps than on a beach) and certainly not in Bradford. It’s a place that makes you think that Bradford is going to be OK and makes you believe that the physical environment of a place really can be transformative.

Bradford is Britain’s great, lost provincial city. Bigger than Sheffield, Newcastle and Bristol and once richer than all of its peers, it has fallen on hard time in recent years. This is partly the result of bad luck, partly bad timing and, it must be admitted partly self-inflicted. Despite all of the money and effort expended on the city, most recently by the Urban Regeneration Company, precious little has been achieved even through the years of economic boom. With the worst possible timing, Westfield demolished part of the retail core, dug a big hole in the ground and were then forced to stop work on the new shopping centre as the credit crunch decimated the retail sector. Elsewhere flagship projects like the Chanel Urban Village were shelved while the redevelopment of the former Odeon became embroiled in a protracted campaign by heritage groups. This soured relationships so badly that there were even protesters at the opening of the City Park as the rest of the city celebrated.

Meanwhile the jewel in the crown, the Mirror Pool – as City Park was originally called – failed to secure funding from the Big Lottery. To have built City Park in the face of all of this adversity is an act of sheer bloody-minded will power. It became an all or nothing issue, if Bradford could do this one thing then anything would become possible!

The story starts in 2003 when the URC Commissioned Will Alsop to produce a masterplan for Bradford City Centre. The central idea of the masterplan was that Bradford no longer had sufficient demand to build on all of its vacant sites and so should turn them over to a linear park running through the city centre. At the heart of this new park stood City Hall in a natural bowl. The Alsop team suggested that this bowl be flooded to create a pool, which would wrap around the City Hall. The impact of the Alsop masterplan is still the subject of some debate. This was summed up by Daniel Cunningham wrote in Estates Gazette in 2005; ‘When Bradford’s urban regeneration company put Will Alsop’s masterplan on display at New York’s Museum of Modern Art in February, some back in Yorkshire thought a building full of whimsical works of imagination was the best place for it. Alsop’s vision for the former wool town, complete with a “business forest”, man-made lake and plenty of space to think and meet, left many local agents scratching their heads, even if it did grab the attention of Manhattan’s art lovers’.

However the ambition and imagination of the plan, unconstrained as it was by practicality and economic viability, gave birth to an idea that, even in a much reduced state has an originality and power that shines through today (even if Alsop himself worries that the concept has been too compromised). The pool in the original plan would have required the demolition of the city’s main Police Station and Magistrates Court. As luck would have it the police were planning to reduce their presence on the site but there was no way that the court could be moved. The eventual design for the park therefore covered less than half of the area envisaged in the original plan.

The process of transforming the original vision into today’s reality included a Neighbourhood Development Framework developed by ARUPs and eventually a design competition that was won by Gillespies. The plan was developed and became the subject to an application to the Big Lottery Fund. However conflict and debate continued to dog the proposals and when the planning application was submitted to committee it was very nearly refused (requiring the casting vote of the chair). Subsequent to this came the news that the Lottery funds had not been secured.

It was that evening, in one of the function rooms of the Victoria Hotel that had been booked to celebrate the announcement of Lottery funding, that the council and Yorkshire Forward committed themselves, come-what-may to delivering the pool/park. It was about this time that a new broom started sweeping through the city, instigated through the appointment of Tony Reeves as the new Chief Executive and a new set of senior officers, including Barra MacRuarie as Strategic Director of Culture and Regeneration. As Barra told us during the academy visit, at his job interview he said that his aim would be to allow Bradford people to become tourists in their own city. To this end he committed himself to delivering City Park, setting aside two hours every Thursday Evening to meet with the project manager Shelagh O’Neill. As he told us, when you get to the end of a project the problems disappear, but problems there were throughout the development and construction of the scheme.

The result might be expected to be a slightly compromised version of the original vision, as Will Alsop feared – but it isn’t, its brilliant! As Shelagh told us, when the sun comes out, as it occasionally does in Bradford, something magic happens. And on que, just as the presentations to the Academy finished the sun came out and the atmosphere changed as the space filled with happy relaxed people. As we were told Bradford people are still learning how to use the space, exploring its possibilities and (there is no other word for it) playing. This is helped greatly by a hands-off style of management. Before it opened there was a great deal of debate about issues like alcohol, skateboards and bikes and anti-social behaviour. The brave decision was to say that the management would only intervene to prevent behaviour that risked damaging the space or harming its users. We watched kids circling in the water on BMX bikes and at lunch time people in the surrounding bars were drinking alcohol. The mix of people however means that no one group dominates the space and so far at least happy balance is being maintained.

The next step is to programme the space. This started in spectacular fashion with the opening event that was reminiscent of the best days of the Bradford Festival. This September has hosted the World Curry Festival and there are developing plans for it to be programmed throughout the year. At present the budget and management capacity to do this is limited and the council are aware that they need to build activity up slowly. However it is a resource for Bradford that the city will learn how to use.

The opening of City Park hopefully heralds a new confidence in the city. The successful completion of new offices for Provident Insurance on an adjacent site has secured 1,000 jobs in the city centre. Provident have made clear that they would have moved out of the centre had they not been convinced that the City Park would happen. The city has also won its bid to be UNESCO City of Film and is exploring the idea of a City Centre Growth Zone (as opposed to an enterprise zone) using rates relief to regenerate the city centre and… the next priority to kick start the Westfield scheme. City Park is therefore much more than another fancy city centre water feature it is potentially the point at which Bradford’s fortunes started to change.