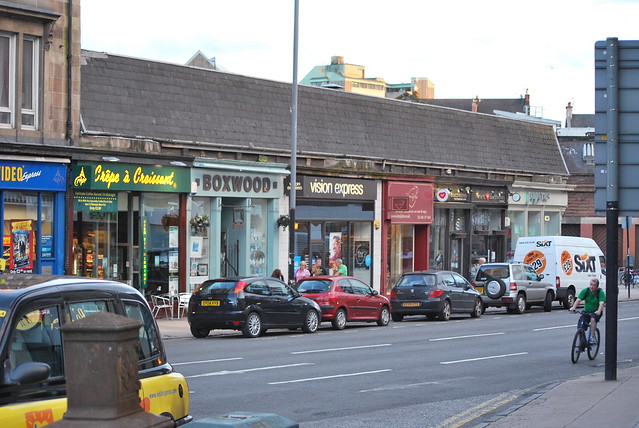 1. The management of Byres Road is largely directed by the community, particularly through the Friends of West Glasgow association, who are informed and monitor the happenings of Byres Road, with the local council seen as unable to implement and enforce desired measures

2. Perhaps better suited to the neighbourhood award category, the adjoining streets have a strong sense of identity and place, and contribute to the success of Byres Road, despite the main street’s lack of exceptional townscape value/quality due to its predominately Victorian architectural style

3. Byres Road acts as the high street for a rather large catchment area, attracting a wide range of users who tend to stay for a reasonable amount of time – acting as a 24-hour street with activity during the day and night, Byres Road provides a self-surveillance urban environment that promotes civilized and responsible behaviour from its users

5. Small improvements to the public realm (leveling the pavements and replacing all the broken elements) can greatly enhance the appearance of Byres Road, which is where the missing link between planning policy and implementation can be found, and can only have a positive impact on businesses

Byres Road is located in west Glasgow. It is one of the main streets of this area of Glasgow and is a through route and commercial street. Although it serves primarily the residents of nearby streets, it has a fairly wide catchment area, attracting students of the University of Glasgow as well as people from areas further afield, due to its active nightlife, independent and niche retailers and cultural activities, particularly the West End Festival.

Historically, Byres Road has its origins as a lane connecting the small village of Partick to the south. Development took place fairly late, in the mid-19th century. Today, it plays the essential function of a high street, with a variety of shops and local facilities, good public transportation thanks to the underground and several bus services. It is characterised by continuously active frontage at ground floor and on top floors. The public realm is permeable, pedestrian-friendly and inviting. There is a feeling of security and people use the street during both day-time and night-time, visit its shops and cafés and enjoy lingering on Byres Road, making it a meeting point for various users. It has to be recognised that the public realm suffers from a lack of maintenance. It is nonetheless functional and does not detract from the character or attractiveness of Byres Road. Basic maintenance works to the pavement and simplifying signage would be enough to improve it significantly.

In terms of architecture and townscape, Byres Road is not the strongest contender. The proportions of the street in relation to the buildings do not provide the strongest sense of enclosure. In addition, the building stock on Byres Road is varied in terms of age and architectural styles and therefore weakens its townscape and sense of place. It may not fall within the right category, acting more as a neighbourhood than a single street, in spite of its history and retail offer, it is weaker than Cockburn Street or Steep Hill. However, as a neighbourhood it becomes a much stronger nomination. The back alleys, side residential streets and nearby uses all feed in to make it a very balanced and desirable neighbourhood to live in. The proximity of the University and the Botanic Gardens as well as the fantastic tenements and private squares on each side also add to its character and its attractiveness. Finally, the role and energy of the Friends of Glasgow cannot be over-emphasised. They are a dynamic group passionate about their street and neighbourhood and collaborate in an exemplary way with each other and with local authorities to maintain and improve the character and heritage of their high street.