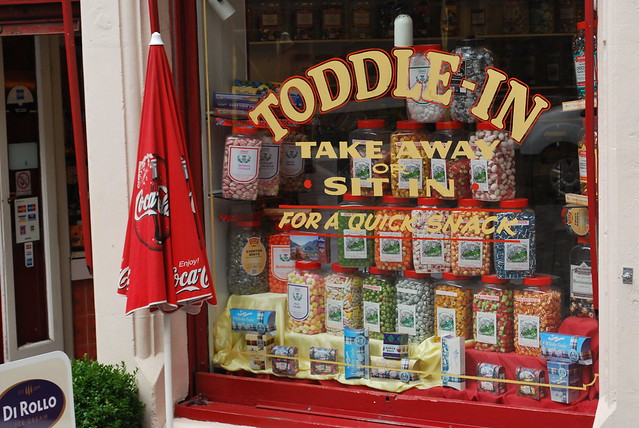 2. The creation of the City Centre Neighbourhood Partnership has been integral to setting objectives outlined in a Community Plan, and delegating it to various action groups for implementation

3. Preserving the historic fabric and maintaining the vitality and character of the street has been at the forefront of regeneration efforts, which has served to ensure the diversity of businesses, including cafes, galleries, independent shops, and restaurants

4. Unique in its shape and its response to topography and architecture, Cockburn Street is a testimony to the talent of urban planners in Edinburgh;
With quality public spaces, wide sidewalks, and good pedestrian connections, Cockburn Street encourages pedestrian traffic and remains active throughout the day

Cockburn Street is located in the Old Town of Edinburgh. It connects Waverley Station and Prince’s Street Gardens to the Royal Mile and in this sense constitutes a strategic link between the Old Town and the New Town. It is both a residential and commercial street, with tenements over the shops at ground floor level.

It is a picturesque street with a unique townscape. Tall narrow buildings, which are very particular to Scotland and Edinburgh, frame the street and give it a strong sense of enclosure as well as continuous active frontage. It is also a serpentine street characterised by its sinuous path sloping up towards the Royal Mile. Whilst the response of urban form to topography is a distinctive feature of the Old Town of Edinburgh in general, it is well exemplified in Cockburn Street. Indeed, this street demonstrates the ingenuity of the renowned architects Peddie and Kinnear who have laid it out. The old fabric has been carved out to make way for the street. The gradient and length of the street have been carefully designed to provide a very comfortable gradient to walk up to the Royal Mile as well as an appropriate length for a connecting road between two major areas of the city.

The adaptability and resilience of the plan of the Old Town to respond to major changes (opening of Waverley Station and the need to connect it to the Royal Mile) also needs to be emphasised. The carving of the street did not compromise the functionality or viability of the original plan and uses.

In addition to performing the function of a strategic through road within the centre of Edinburgh, Cockburn Street is a place in its own right. After a period of decline, a regeneration programme was undertaken to revitalise the street and its shops. Led by the Council with the input and investment of heritage and local groups, it tackled many aspects of the public realm. The buildings, all historic and of high heritage significance, were entirely restored. At street level, the shop fronts were redesigned and emphasis was put on making the street pedestrian friendly. The pavements were widened on both sides to allow people to linger and café culture to develop. Car traffic was reduced by making the street a one-way street. Public art is also encouraged and used in a playful way and to celebrate the street and its activities.

Finally, there is a good sense of community on Cockburn Street. Shopkeepers are proud to be part of a street which has a special place within Edinburgh. They are equally proud to be part of a community of independent retailers, who have developed good relations and help each other out. There appears to be an excellent relationship and collaboration with Edinburgh Council. Here too, councillors and retailers seemed to know each other fairly well.