Session Two of the Academy’s annual conference in Bristol, Debating the Dimension of Greenness, was chaired by Academician John Lord,  Founder, yellowbook Ltd. who explained how the Academy Congress functions as a means of both exploring a particular theme and learning about and from a specific place – Bristol – of which he summed up in three words: innovative, creative and unorthodox. He introduced the first speaker Peter Lord from Aardman Animations, world famous for their Claymation work with Wallace and Gromit.

Aardman is an SME that creates and markets animated films. As a financial business, it stands on five legs: feature films, TV commercials, TV series, licensed series they create, and a digital department.

Peter talked of how he came to Bristol in 1976 as part of an uncalculated life journey that boiled down to good timing and lucky breaks – beginning with nepotism. When he first arrived, Peter noted that there were only three people working in animation: two from the BBC (Colin Thomas and Bill Mather) and himself. They gave Peter £600 to make a short film – and he posited that without this film, Aardman would never have won an Oscar, nor had an advertising career, and plenty more.

Peter chose to come back to Bristol as he was born there, so he was familiar with it. Love was another factor in the equation as Dave’s (his business partner) girlfriend was studying here. Finally, the BBC was a tenuous business link as their entire industry circle were three of the four people they knew at the broadcasting corporation. Plus, it was a frightening prospect to go broke trying to make it work in London, as they had never dreamt of borrowing money.

If the game plan had been to build a company that specialized in model animation, advertising and the Oscars, they simply wouldn’t have come to Bristol. It was, however, a combination of a few different factors that did lead them here and allow them to pursue their goal: to make films and start their careers.

In 1996, Peter split the company in half between feature films and mainstream films. Although Aardman was only the two of them for about six years, they now have a team of over 100. These people came from a variety of places: some they recruited conventionally, some they found at university open days, even their head of production began as a cleaner! Peter notes that the greatest asset they have is the people – they are the reason he is here. As the team grew, so did their contacts and their business.

Peter noted that their studio began in an old grubby shed, but they made it work. They offered something new and surprising – artistic integrity and inspiring ideas – and clients enjoyed the experience of Bristol, Clifton and the surrounding area.

Peter concluded that animators are filmmakers and performers, but they present their work in a private and non-showy way – if they are ambitious, they are ambitious in practice, not in person; much like Bristol.

John Lord rounded up Peter’s talk, stating that city economies are ecosystems of invention and opportunity. 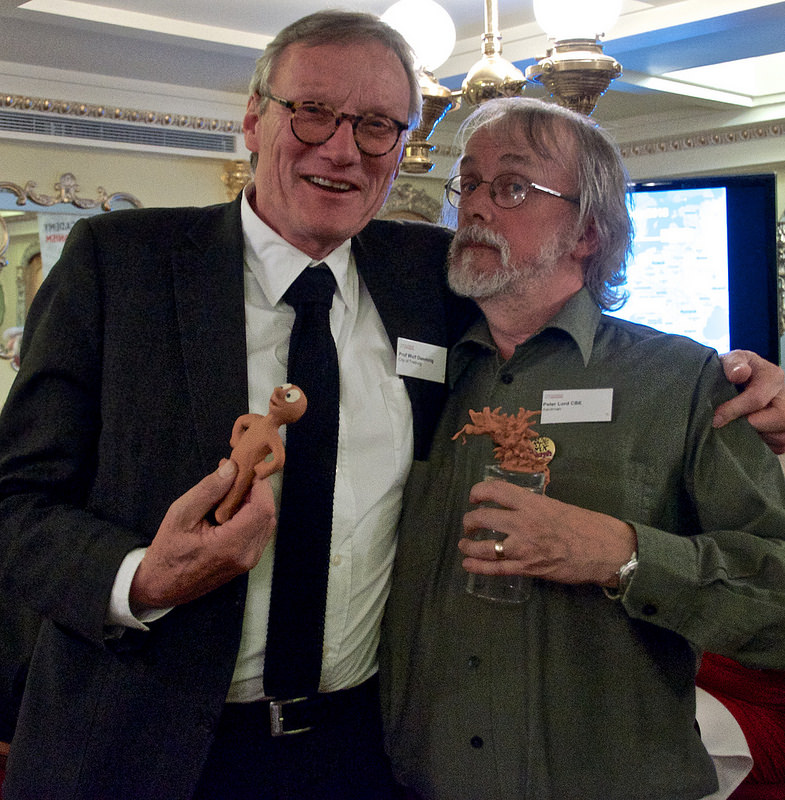 Prof Herbert Girardet presented his subject of creating generative cities, linking in to his recent working with John Pontin in Bristol. Describing cities as input-output systems that must adapt, Prof Girardet noted that whilst we have only lived as industrialised people for the past 150 years, this has cause staggering changes. One of the major changes being the upsurge in people living in urban areas – now at 50%, and by 2030 this will reach 60%.

Prof Girardet implored that we need to think beyond the edge of the city: to the skies and the seas and to think about how to better ‘green’ the regions. To create a new economy, one that would be focused on decreasing energy use, fossil fuels and to creating long lasting products – so to reduce on costs for the often ineffective processes of reuse and recycling.

He compared the cities of Barcelona and Atlanta, which are similar in population but have drastically different footprints. Atlanta has massive urban sprawl whereas Barcelona has denser apartment buildings. The reality is that even living in the dense places, there is still extraordinary energy use per person. That being said, the ecological footprint of cities is what makes the existence of our cities possible.

Prof Girardet did a study of London’s ecological footprint. He found that 125 times London’s surface area is needed to provide for the needs of Londoners, and this huge number doesn’t even include food waste or pet ownership. He noted that we take energy from burning rainforests, grain from Brazil, mining across the world and more.

Dubai is a classic example of recent urban growth with a serious lack of resources available. So, what do people do? They have tried to use water beneath the desert but the reality is that food more often comes from further afield with huge quantities of waste being dumped to rot in the desert. The critical issue is to think beyond the edge of a city.

Prof Girardet has examined such things as London sewage, where all the nutrients from feeding people, animals and food is being dumped, but in Berlin, these same nutrients were deposited in farms on the city fringe. He also looked at air pollution – which is considered a key problem of cities around the planet and has huge implications for health. Also, the increasing carbon burning has a major effect on the earth’s atmosphere, accelerating the melting of the world’s ice, and ultimately effects the cities and the farmlands that feed them.

Looking specifically at Adelaide, which has been working on greening the city, Prof Girardet discussed the growth in solar energy production that is being used to run the buses. This example shows what can be done and how we can create a new economy out of decreasing energy use of fossil fuels through creating long-lasting products.

He brought up the example of Bristol where they are using dehydrated sewage sludge produces by Wessex Water. However, in Adelaide they have gone one step further by taking wastewater from the city and using it on the farmland that provides food for the city and is sold at markets in town. Now, the city of Adelaide is using 30% renewable electricity and has 20,000 hectares of hinterland that is used to produce food for the city.

He noted that there are renewable energy opportunities in England, such as the huge windfarm off the coast of Kent, which London is using to provide 30% of domestic electricity. There are now solar farms on farms themselves, allowing farmers to make additional income on top of growing crops or livestock.

He concluded by stressing how it is of critical importance to communicate and teach these things in schools to today’s youth. He closed by noting that we need efficient renewable systems, to regenerate soils with organic matter, restore watersheds, rebuild a human attachment to nature, and build a green economy.

Marcus began by restating that in 2010, 50% of the world’s population was urban. He noted that the UN recently published ‘Hidden Cities’, which identified the three biggest threats to the world’s population: infectious diseases, traffic accidents and violence, and lifestyle diseases such as heart attacks.

In Bristol they have created SHINE, a unique network of health care professionals and built environment specialists working together. Three points of which the network is attempting to address are that: the places we create determine our health, we can’t afford lifestyle diseases, and our work impacts people’s health.

He noted that the issue of equity, that used to run through built environment work, now runs through public health work. Marcus raised the fact that nearly 400 cyclists are killed or seriously injured in the UK every week (two of which are killed), but noted that this statistic is not made readily available through the press. Another stat he brought up was that only 1% of people in social housing use the green space on their doorstep. This begs the questions: what does it say about the green space? Certainly, quality is a big issue. We have created cities ripe for non-communicable diseases: lifestyle diseases. The main point Marcus was making was that we all need to feel a level of responsibility in our professional lives – how can our work affect the health of our people and places?

Setting the Bristol context, Marcus noted that there are 1,500 deaths a year due to physical inactivity, 10 deaths from road accidents, and 188 deaths attributed to air pollution. Of course, the causality for road accidents is much easier to establish, but things such as respiratory disabilities occur more frequently in children and old people living in deprived areas. It is clear that the health problems have potential links to the built environment. Every public authority has a public health director whose job is to look at these public health issues; however at present, our health policy is targeted to address individuals. We can’t just build ‘fit cities’ but we currently build the risk factors into towns and cities: we have supersized coffins for the obese, we have supersized car seats for obese children, we have lavish office and retail parks that are 90% car-dependent. Do we leave it all to the market?

Marcus shared the WHO definition of health: “Health is a state of complete physical, mental and social wellbeing and merely the absence of disease and infirmity.” The Academy of Urbanism’s mission is full of these big picture themes, and has that awareness

However, is it just good design? We need support from public health, as they can provide advocacy, evidence, equity, economics. We need to see more partnerships built between the environment sector and the public health area, a topic that will be explored more in ‘Cities of Health’ conference in October 2015 in Bristol, part of Green Capital year.