In summer 2016, Kevin Murray AoU witnessed the changing scene in Chattanooga, the former industrial city in eastern Tennessee. Impressed by the distinctiveness of the place and its current transformation, he met with local people to understand the underlying story more fully. Here, Macon Toledano of the Lyndhurst Foundation and Ryan Sandwick of the Chattanooga Design Studio explain some of the economic, cultural and civic factors behind its resurgence and the role played by urban design.

Industry, as a way of life, is deeply rooted in Chattanooga and is perhaps the defining image by which the city has come to know itself and be known by others. Once celebrated as the ‘Dynamo of Dixie’, Chattanooga’s economy traditionally bore more likeness to Northern industrial cities than to the predominantly agricultural American South. As a city that takes great pride in its self-determination, Chattanooga’s particular brand of industry has always inferred not only a great place to manufacture and distribute, but also to invent, create, innovate and reinvent. It is this particular openness to the possibilities of invention that has been carried forward as a legacy from Chattanooga’s industrial past, to manifest itself in its current revitalisation.

Industry left a strong physical imprint on Chattanooga. In a city historically inclined to demolition as a path forward, industrial structures often weathered the wrecking ball better than traditional residential and commercial buildings. The greatest realisation of adaptive industrial reuse is surely the 1890 Walnut Street Bridge, which was converted from a defunct highway to pedestrian use in 1991. As well as being a ubiquitous, industrial era icon by which the city is widely recognised, the bridge has become the preeminent pedestrian destination and vantage point in Chattanooga. The once vibrant Chattanooga ‘Choo-Choo’ train station is undergoing a similar reinterpretation as the core of an emerging entertainment district. 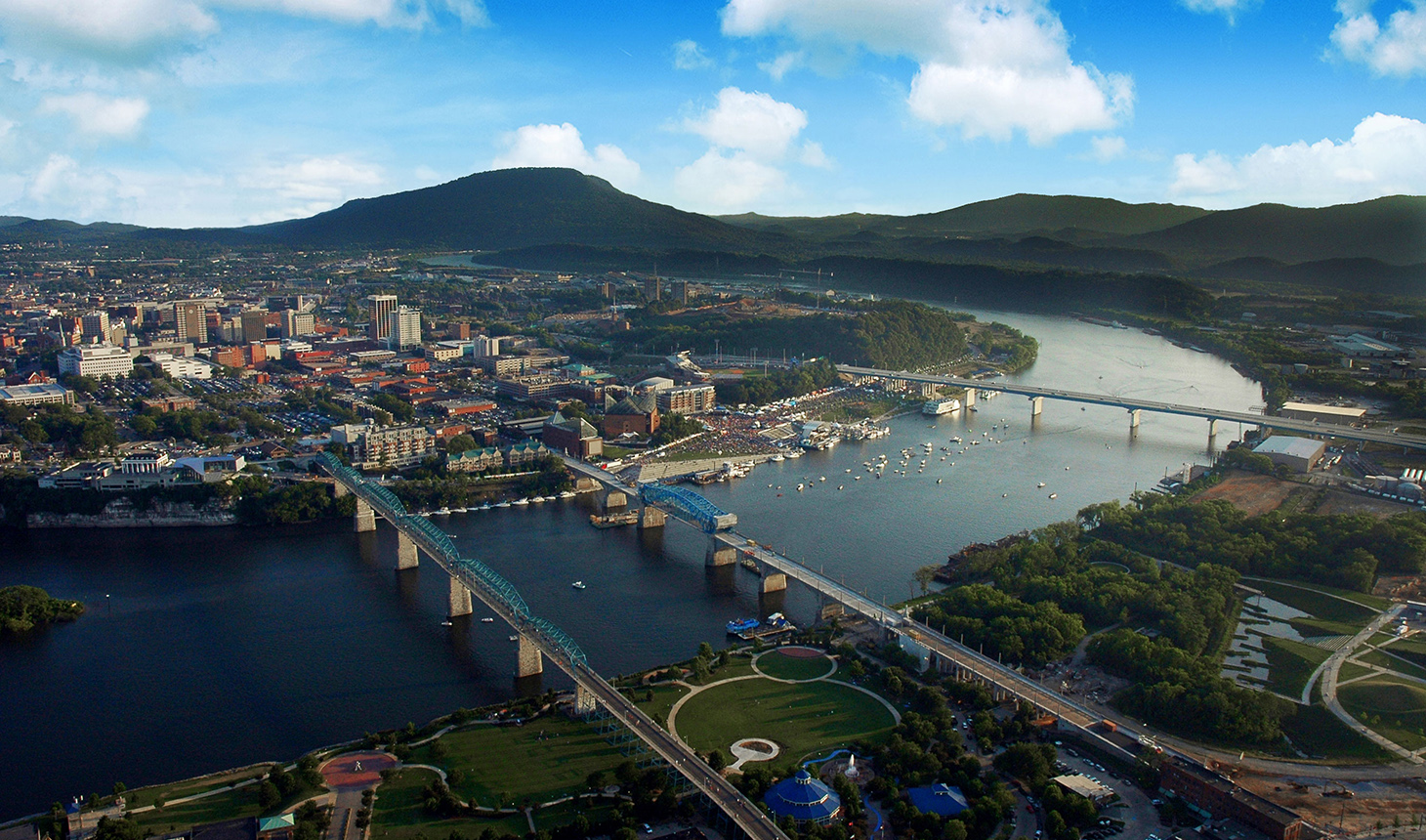 Many of the more formal design traditions that characterise other Southern US cities are conspicuously absent from the local palette. With the absence of any dominant vernacular heritage, there is no particular aesthetic that is more authentic to the city image than industry itself.  The counterpoint between new and historic industrial buildings has become part of the city’s evolving identity. New uses often clash with discordant industrial neighbours: a stranded chicken processing plant or a drug manufacturing plant surrounded by encroaching residential and mixed-use development.

The landscape and townscape of Chattanooga today is as much a result of its meteoric rise to industrial prosperity as it is of its later decline. Unfettered industrial development and its subsequent decay as an economic engine ravaged Chattanooga, leaving a legacy of physical, environmental and social degradation. By 1969, national news anchor Walter Cronkite declared that Chattanooga was “the dirtiest city in America”. In 1971, the last passenger trains ceased service to Chattanooga, ending the city’s reign as a great American rail hub. The trolley systems had long been demolished and, with the decline of industry, those with the means abandoned the city for cleaner, higher ground. Suburban sprawl dominated between the 1950s and 1970s, and the downtown was largely abandoned to America’s poorly conceived Urban Renewal movement. The demolition of entire urban neighbourhoods, often replaced with nothing more than surface parking lots, was exacerbated by new highway projects that ripped through three sides of the downtown. 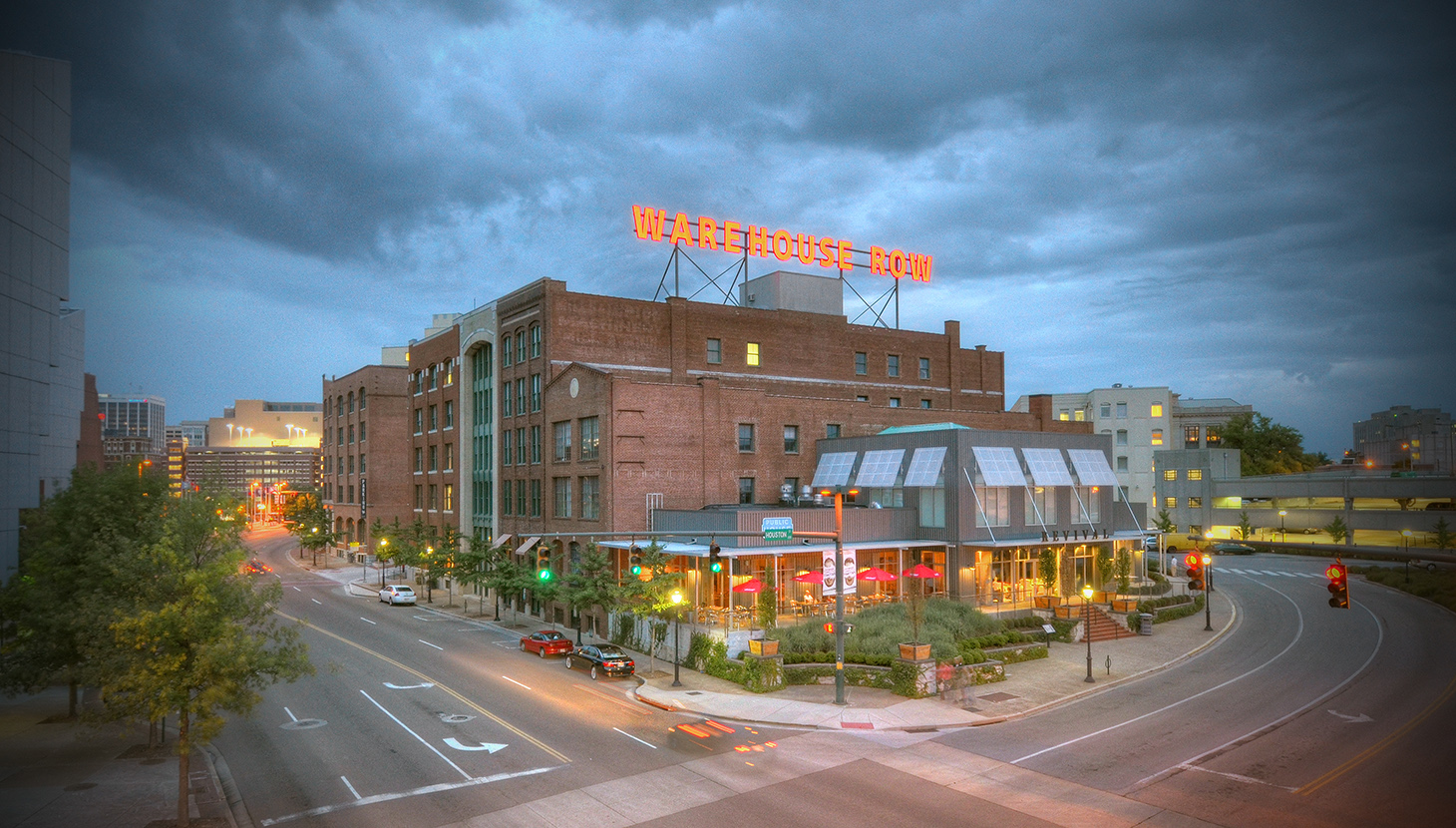 This was a bleak picture for a city that once stood at the forefront of American innovation and enterprise. To some citizens, it was not remotely an acceptable self-image; they were determined to re-establish a sense of place and a civic vitality that would restore confidence in the city and make Chattanooga desirable to future generations. As leaders, they made no pretence of having all the answers. In fact, no one knew what the revitalisation of Chattanooga should look like. What they did have was a strong legacy of innovation and an openness to the possibilities of reinvention. They turned for help to leading urban thinkers and, more importantly, with their guidance, to the broader community. From the late 1970s there ensued a ground-breaking effort to involve the citizens of Chattanooga in defining the vision for the future of the city, a broadly-defined strategy that Chattanoogans ultimately adopted as ‘the Chattanooga Way’.

Early participants stressed the need to identify and exploit the city’s key assets, to create a place that truly served the needs of local citizens. As Ann Coulter, the former head of Chattanooga’s Regional Planning Agency, has stated, “We learned early into our revitalisation efforts that the most important things were being authentic – not trying to be someplace else – and to do whatever we did with the highest quality. And now, almost two generations later, that is still our recipe for success.” Chattanooga eventually became one of the best known post-industrial revitalisation stories in America. 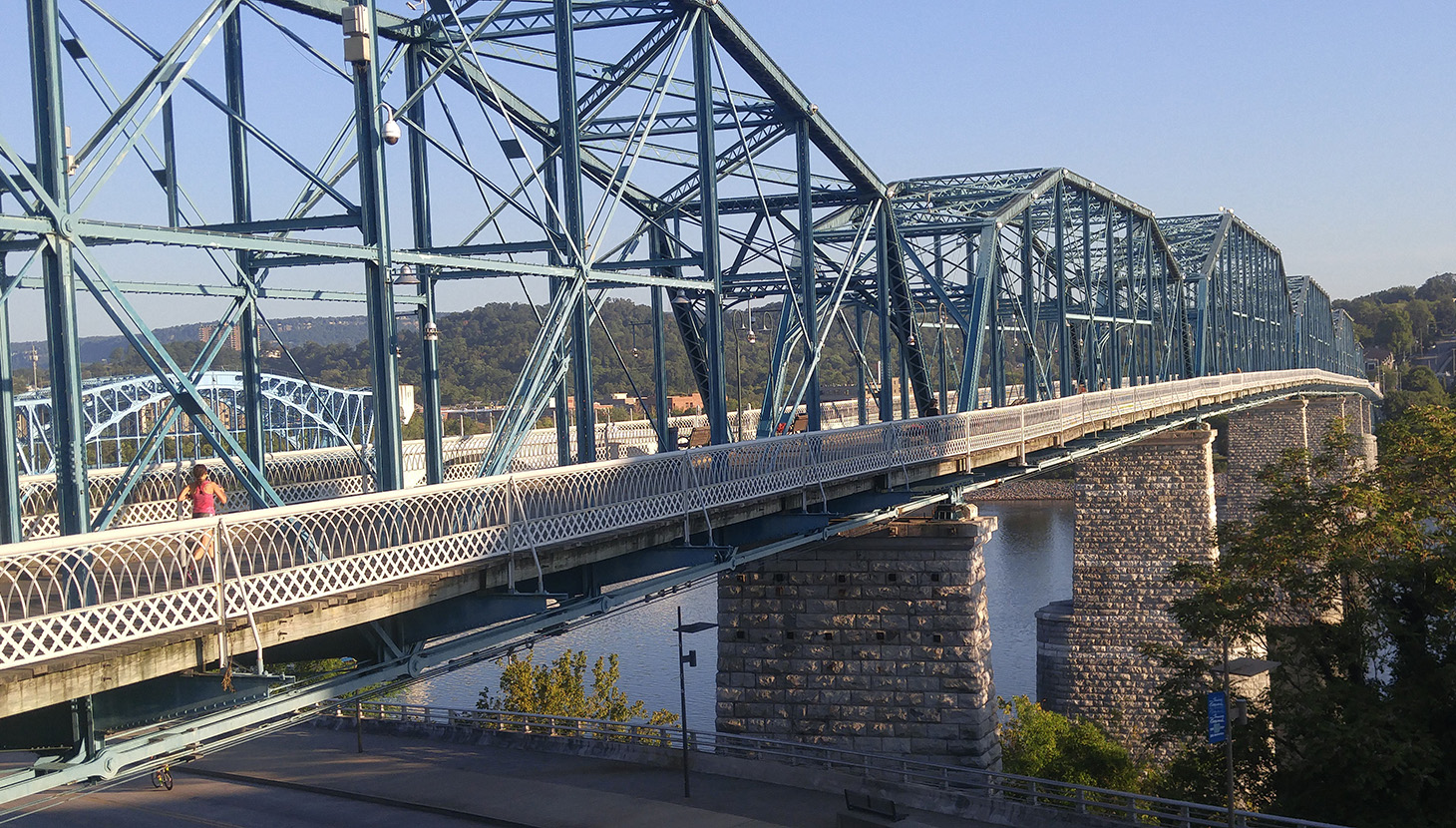 While the iterative community-driven visioning process – combined with strong leadership, expertise and local philanthropy – provided the principal framework for this effort, the outcome was a clear directive to reinvigorate public spaces and civic life in the city. Three key strategies stand out:

In each of these three dimensions, Chattanooga’s strategy was revolutionary for its time, reflecting the same spirit of innovation and ingenuity that characterised the city during the days of the industrial era. Long before cities began grappling with how to reinvent themselves, the citizens of Chattanooga collectively recognised the value of bringing public life back to the downtown core.

These efforts were embodied in the creation of Miller Park in 1976, designed to be the civic heart of the waning business district, and subsequently in 1988, in the development of Miller Plaza as an offshoot of the work of the Design Center. As interest in the form of the city and its public spaces developed, the Chattanooga Urban Design Center was established in 1981 under the leadership of Stroud Watson, a professor of architecture at the University of Tennessee. Stroud brought students to Chattanooga for transient studios, using downtown as a laboratory for innovative urban experiments. Many of the downtown’s most iconic places, such as the Aquarium, emanated from these student projects. The studio would grow to become the city’s conscience on matters of urban design. 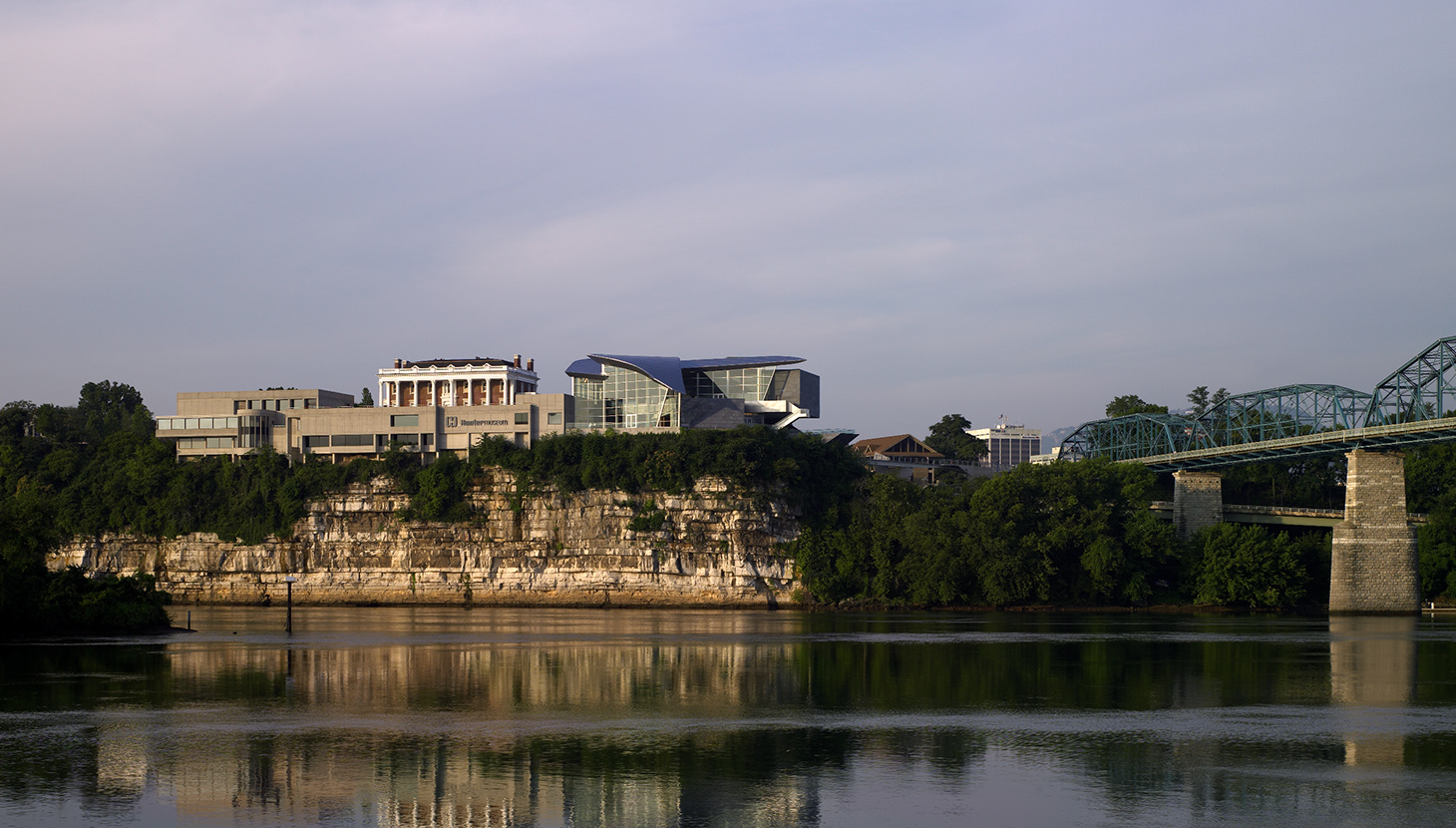 In the early 80s, the Moccasin Bend Task Force enlisted citizens to explore the potential of a national park along the river. The Task Force not only prioritised conservation over development, but seized this opportunity to expand the scope from Moccasin Bend, a distinctive meander loop, to include the entire river’s edge, leading in turn to the development of the Tennessee Riverpark Master Plan. Most remarkable about the Riverpark and the early planning efforts was the consistent level of citizen involvement and the unusually long-term vision embodied in the plans.

In 1989, the first leg of the Tennessee Riverpark opened, finally allowing access to the river’s edge for public enjoyment and initiating the trend towards open space infrastructure across the city. As a centre of civic life, the riverfront attained a new level when the Tennessee Aquarium and Plaza opened in 1992. The reconnection to the river was reinforced by further investment in the public realm of the blocks surrounding the Aquarium, establishing an entire riverfront district with the Aquarium and its plaza as the centrepiece. 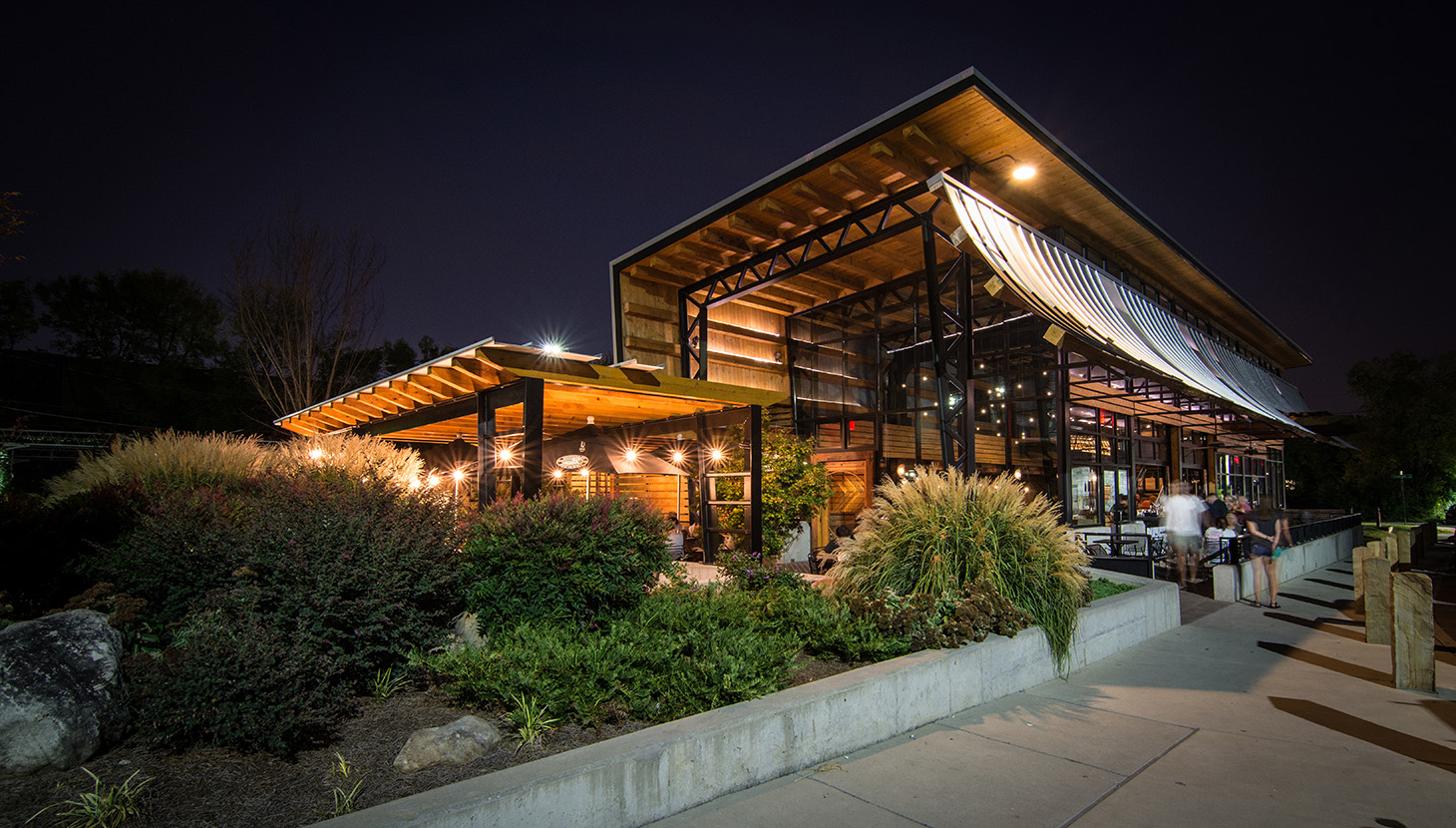 The Flying Squirrel. a popular Southside destination in an in an industrial neighbourhood

While early emphasis on the public realm laid the ground work, it has long been recognised that the key to a vibrant downtown lay in the residents. River City Company, a non-profit development company, kick-started the housing revival in 1993 with RiverSet Apartments, the first market-rate housing in the downtown since the 1920s. Reflecting the growing appreciation of walkable urbanism, over 1,200 new downtown units were built in the early 2000s. To further enhance the appeal of urban life to families and downtown employees, the city government joined forces with philanthropic and private partners to build two downtown magnet schools, the first urban schools in a generation. Right now there are more than 2,000 residential units under construction in the downtown area, gradually generating a market for the essential mixed-uses and services necessary for a dynamic downtown.

The urban revitalisation effort cannot be separated from the environmental restoration movement. Green infrastructure and open spaces have become a trademark of life in Chattanooga; almost as if John Nolen’s 1911 plan for a Chattanooga park system, while not realised in form, somehow foretold the city’s destiny. Chattanooga has become a national destination for outdoor activity, with a growing network of trails, pathways, and waterways to match any.  It is not surprising, but perhaps ironic, that the once ‘dirtiest city in America’ is currently home to the USA Cycling Championships, Ironman, Half Ironman, various trail running and biking events, America’s largest rowing event, a world-class rock climbing scene and has twice been recognised by Outdoor Magazine as the ‘Best Town Ever’! If the return to the river-city and restoration of the environment are two of the legs upon which Chattanooga’s reinvention stands, then certainly technology is a third. Invention and long-term vision have been hallmarks of the effort to re-think the city and build community confidence. In 2010 the city’s municipal utility company, the Electric Power Board (EPB), set out to build the smartest energy management grid in America. The same fibre optic network used for the smart grid simultaneously made gigabit broadband widely accessible for the first time in any American city.

Soon Chattanooga was ‘Gig City’ and, with the recent release of 10-gigabits to the public, the full potential of such high-speed internet is only just beginning to unfold. The appeal to young entrepreneurs is strong if not obvious, and the reincarnation of downtown as the Innovation District represents the melding of technological potential with the more established focus on place-making and activity programming. Driven by the possibilities of the innovative economy, the first mid-sized city to have an Innovation District has just now become the first to launch an electric car ride-sharing programme.

At its nadir, Chattanooga had nowhere to look when it began its regeneration, other than to itself. It was the positive legacy of industry – of invention, enterprise and creativity – to which Chattanooga adhered as a guide for a ‘New Age of Industrialism’. The processes that the city pioneered, such as asset inventories and community visioning, have become standard best practices in cities around the world. Building upon these methods, Chattanooga has not only reimagined itself but, more importantly, gained from that new self-image the confidence to move forward with a commitment to pro-active, creative reinvention.

Chattanoogans must periodically remind themselves that the evolving notion of the ‘Chattanooga Way’ entails casting the net of community participation widely, in order to find a truly sustainable pathway into the future. Despite the many remaining challenges, each phase in the reinvention of Chattanooga reinforces the image of the city as a place of possibility.