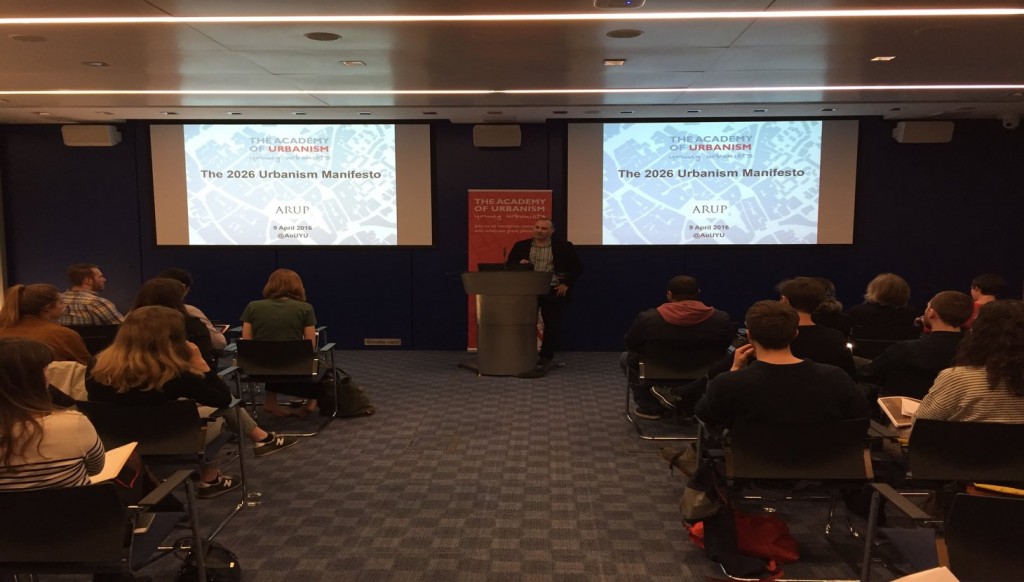 “Our cities are facing rapid growth and rapid change. If the UN is anything to believe, we are looking at a future where two-thirds of the world’s population will live in urban areas by the year 2050.

The past decade has witnessed many changes to planning, design and urbanism, particularly with the advent and growth of digital products and services. The next ten are set to bring even greater changes as our technology, behaviours and attitudes change even more dramatically.

I spent this past Saturday at the Urbanism Manifesto 2026 event, organised by the Academy of Urbanism Young Urbanists and hosted by Arup, in which we considered some recent changes and innovations, and discussed how this might shape the fabric of urbanism in the future. We debated and talked about positive changes to our cities, as well as negative affects of such fast-paced development.

During the event, we were treated to quick-fire presentations of five minutes each on a range of different topics. Once these were finished, we split in to three separate groups to discuss and debate the pros and cons of changes in three different fields: housing and transport, digital/smart cities and disruptive technologies, and funding and devolution.

The panel of speakers began with Brian Deegan, Principal Technical Planner for TfL with a talk revolving around cycling design standards within London and the future of the cycling network. He discussed the five step analysis of network planning that TfL have employed.

The first step TfL undertook was to review existing conditions and look at the cycling infrastructure we already have. Next, they conducted a mesh density analysis, meaning they assessed how packed the network area is. In theory, a cyclist should not have to go more than 400 metres before they come across another route. The mesh density analysis allows TfL to see where London is lacking in route connections.

The third step was the classification audit in which TfL classified all the roads by what level of cycling a user would need to use each. From this they determined that 80% of the roads are good to cycle on for a reasonably experienced cyclist. After the audit they conducted a porosity analysis, meaning they looked at the routes to see how easy it is to get through areas without coming across obstacles or barriers. Finally, they created the Cycling Level of Service assessment, which attempts to quantify what ride quality actually means to riders.

The next speaker was Kirsty Austin, Treasurer for Friends of Peckham Coal Line. The project she represents is an ambitious one which will see the redevelopment of a section of the Peckham Coal Line into an elevated park, stretching from Peckham Rye station to Queens Road Peckham. The project was originally funded on Spacehive, piggy-backing on the Mayor of London’s crowd-funding projects for London. Austin took to the podium to give her lessons on crowd funding for public projects.

In her opinion, crowd-funding is a a great way of engaging people and organisations, as it is democratic and gives citizens the opportunity to invest in their own communities. It also serves as a catalyst for innovation, with lots of people stepping forward to offer their support as soon as word begins to grow, which gives legitimacy to the project. Crowd-funding can also increase the pace and momentum of a project, as observed in this one. What may have taken three or four years with traditional funding methods has been catapulted forward due to public support.

Austin told the audience that the key ingredient for success of this campaign was the coupling of on and offline activities. The organisation ran plenty of grass roots community events as well as having a strong online presence.

Our third presentation of the afternoon was from Anastasia Vikhornova, Design Researcher at Future Cities Catapult who spoke to us about blockchain technology and it’s potential for the future of our cities. She explained to us that blockchain technology is not purely financial; that it is peer to peer technology which will allow a decentralised network of computers to record individual actions in a distributed manner. Use of the blockchain will ensure security of data, efficiency by removing intermediate people, transparency, and scalability.

One example Vikhornova gave as a use for the blockchain was centred around environmental efficiency; using peer to peer interactions to create an off-grid energy market. For example, if a person had a solar panel installed on her rooftop, she could trade directly with her neighbours via the blockchain without any kind of intermediary, as in the example of this Transactive Grid in New York.

Other examples were given for the future of blockchain in cities, such as vehicle emission tracking, data participation from citizens, and monitoring business taxes according to BIM data on the blockchain. The uses for this technology seem to be never ending, and hopefully can help us move towards a more fair and equal society.

Next up was Claire Bennie, Consultant at Claire Bennie Ltd., who spoke to us about housing policy and what she has learned from mainland Europe. European cities are experiencing population growth just like London, however the way their cities approach housing policy differs greatly.

European cities have power vested in the centre of each city. They have money, and the power to borrow money; they control land ownership and land assembly, and they plan the transport networks and control the division of mega-plots. They have the ability to tell developers how much the land is worth so that they can try and recoup all of their investment through plot sales. Most impressively, they achieve 50% affordable housing.

Bennie explained to us that European cities are much better at communicating what they are doing with their land to the public. She witnessed visitors centres that explain all of the schemes, sign posts, websites and other information giving the facts and data on the developments and instructions on how to walk around them. In other words, they are engaged with their communities.

The short presentation was wrapped up by commenting that London needs much more public participation and understanding about planning, and that citizens need to know who owns what land and where. People don’t know who to complain to or how to feedback on their communities, so engagement barely exists. Lastly, she commented that the Mayor of London needs to have more borrowing power, better leadership and more communication about how the city is changing. In short, greater transparency on planning and real estate decisions for the city and it’s people.

The fifth speaker was Zach Wilcox, Senior Consultant of City Economic at Arup, who presented to the group on devolution and asked the question, “will ‘local’ actually mean ‘better?’”

Wilcox discussed the main drivers behind devolution in the UK, namely austerity from a drop in central government funding, regionalism, localism (driven by austerity), and incentives for growth.

He discussed the idea of scale – what is appropriate and who is accountable? It isn’t appropriate to put all the authority in to major cities; regional input and local control is also important. However, there is a limit to localism as well. Wilcox gave the example of a neighbourhood in Atlanta with such devolved power that it became its own city and, owing to the fact that it was very affluent area, proceeded to try and claim it was not responsible for lower income families located outside the region. Situations like this illustrate the danger of too much localism.

His general point at the end of his presentation was the devolution is a great tool, but we have to be careful to define it so that it isn’t taken too far.

The final speaker of the afternoon was Chris Green, a Designer with Arup, fresh from his exhibit at the Design Museum, to speak about drones and the future of our urban skies.

Drones are becoming more and more sophisticated as we see new changes and innovations in energy, communication and autonomous technology. Green proposes that we harness this new technology to make use of our cities’ rooftops and create urban farms up in our skies.

Private gardens within London currently take up 1/5 of all green space, and there is plenty of rooftop space which is not being used at all. Drones could provide an autonomous technology which could grow, care for, and harvest urban crops.

Green proposed an idea of dividing our airspace in to new levels above the city; for example a lower level for farming airspace, transportation above that, and delivery space as an upper layer, creating what is essentially endless air channels.

Once we have more sophisticated drones, they will serve as a catalyst for the creation of new systems, new products and new services being offered, resulting in new opportunities for urban land use.

The last part of the afternoon was the division of the audience in to three break-out groups, each tasked with debating the pros and cons of three different topics with regard to the next decade: housing and transport, digital/smart cities and disruptive technologies, and funding and devolution.

The main points fed back to the group as a whole afterwards were as follows:

At the moment our housing practice is resulting in vast inequalities in cities. Ownership in London is primarily in the hands of developers, as public land becomes private, and not returned back to communities. The use of technology can help us map land in London and inform citizens as to who owns it.

Communication should also be improved; it seems to be so easy to discuss and distribute information on cycling (for example) but not housing. Social media and popular video websites such as YouTube could be used to disseminate information on housing inequality.

Lastly, top down and bottom up policies should not contradict themselves and the whole process should be more democratic. Our responsibility as citizens should not end once we’ve voted to elect our representation, but rather we should have the opportunity to be actively engaged in policy-making.

What makes sense in smart cities and developing technologies does not necessarily make sense with regards to what works for people. Technology is useful but not without remembering the human element.

One major challenge of digital technology and innovation is the different speeds and scales of governance. Technology develops fast and ready, and is tested live. New ideas are thrown out to see what works, but it doesn’t gel well with our policy-making practices at a governmental level, which tends to be slow and careful.

The group considered that it is important that standards are set about how these technologies are developed, but questioned who sets these standards?

As technology develops there will be a lot of change in uses, and we need to be ready and constantly looking ahead so we can be ready to act within a short time scale.

The key with successful devolution is that it must be fit for purpose. We have to be clear on what problems we are trying to solve and what makes sense, taking in to consideration scale and methods of funding. Practices like crowd-funding can be brilliant for public projects in the sense that they lend ownership to communities, but in some areas where people are focussed on paying their rent, would they be interested in funding public projects?

The question of identity was also highlighted, for example with the north of England. Do people in the north have a strong sense of belonging to the ‘northern powerhouse,’ or do they identify more with their local communities?

All in all, the presentations and break-out debates gave plenty of information to be considered, and resulted in more questions than answers, but the afternoon was nonetheless highly interesting and enjoyable!”

This article was originally published on Curious Urbanist. Read the original article