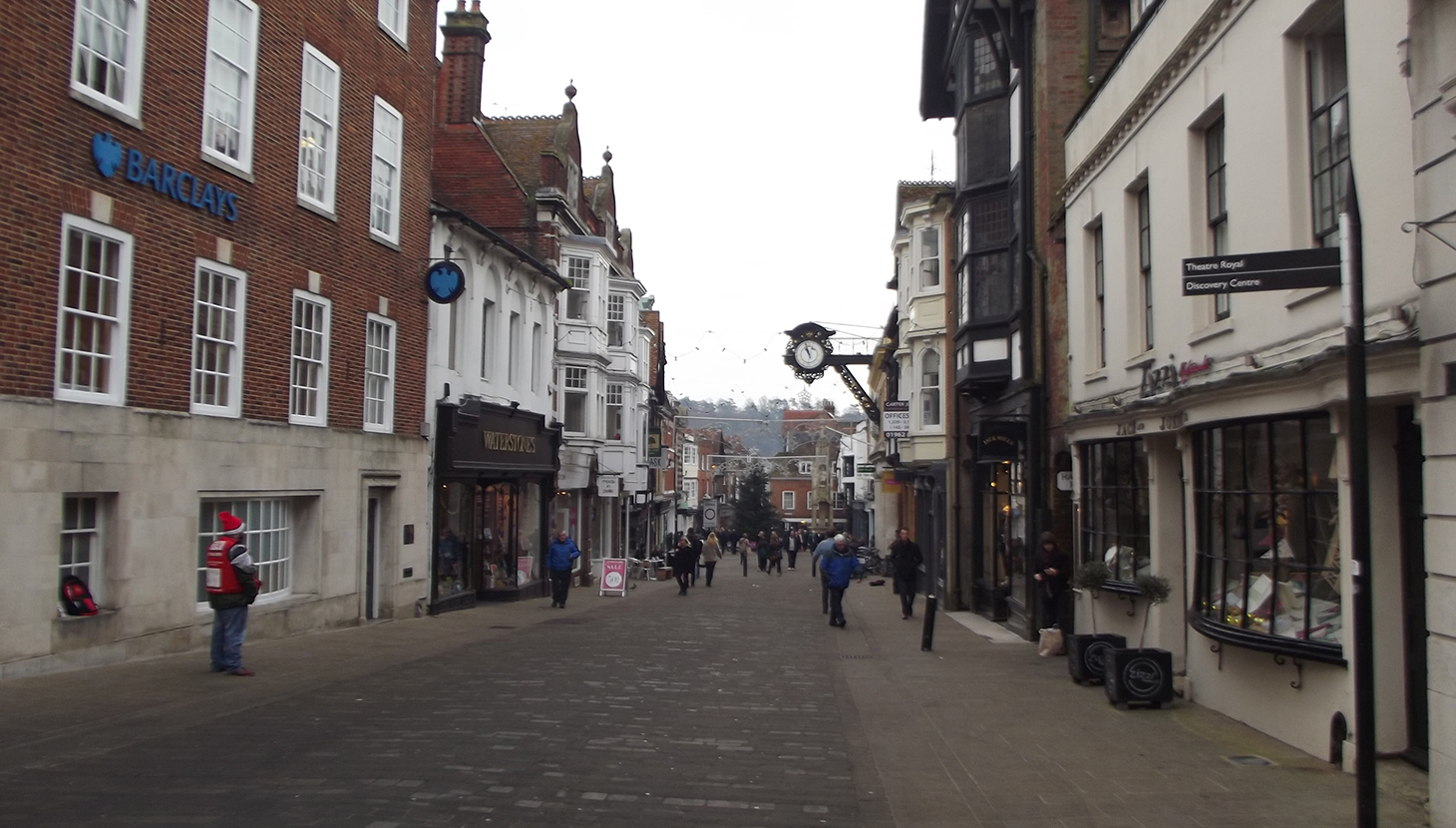 Overall, Winchester benefits from strong governance. Unsurprising, perhaps, as the City is home to two local authorities and an intelligent and articulate community. The City does have areas of relative deprivation and a small ethnic community. Partnering between the City Council and Winchester Area Community Action (one of a number of partnerships) seeks to “reach out to (our) minority and excluded groups to make the town a more inclusive place…..”. The City Council appears to recognise the need to include all groups in the wealth and advantages which the City offers.

There is clear evidence of a collective vision set out in “Winchester – Towards our Future”, drawn up by the Town Forum. The City Council encourages the community associations to draw up neighbourhood plans, and further encourage participation through partnerships with local networks and amenity groups. The local architects panel contributes to deliberations on planning applications.

The City adopts an inclusive approach to the issues it faces. The process of regeneration of the town is being carefully managed and a range of initiatives, involving community participation are evident – local architectural practices are engaged in masterplanning exercises around the town. Major consultation exercises have been undertaking with the community in respect of the regeneration project at Silver Hill. The City Council has a wide-ranging approach to local stakeholder and community engagement. It encourages and supports the creation of bodies to ensure that all stakeholder and community can participate in decision-making related to the future of the City.

Winchester is a town whose history and shape has been shaped by the great institutions of church, law and military. The largely domestic architecture is set in counterpoint to an impressive cathedral in a modest setting that gives Winchester a distinctive sense of place, identify and acts for a focus for the local life of the City.

The whole town acts as a performance space with festivals, street theatre and ice rink inspired Christmas celebrations. The physical structure of the town – streets, public buildings and green spaces, are full of art produced by the local community. Art features in many new buildings and the ruins of the Nunnaminster – in the Abbey Gardens – is to be transformed by the artist Alex Hoare into a new installation reflecting on “a woman’s place” where past meets present.

Winchester displays a strong sense of place, expressed at the human scale with a very clear expression of civic pride. The university is becoming increasingly important and the town caters for a significant number of visits on an annual basis. A state of the district assessment carried out in 2004 concluded that the district’s strengths were its natural environment, the quality of local services and growth in industrial and commercial floorspace. Census records reveal that families tend to live in the City for generations and that it is a friendly place with a strong sense of communities.

New developments in Winchester are strongly influenced by the medieval landscape, with narrow streets opening out into the large spaces around the cathedral – Hyde Abbey and the college. New buildings (of which there are a limited number) are carefully integrated into the local environment whilst seeking to meet modern requirements. Services and creative industries in particular are prevalent and unemployment is at a very low level (less than 1%).

As evidenced by the town’s strong economic base and the large number of visitors that are attracted to the town every year, Winchester is an attractive place for people to work and visit. With its substantial network of medieval streets and buildings and low crime rates Winchester is a safe place to visit and enjoy. Through the university, Winchester attracts young people whilst some 16,000 workers commute in daily to the jobs offered in the City, primarily in public administration, the service sector, defense administration, education and tourism. Initiatives such as the Winnall Rock School helps youngsters to acquire music and life skills whilst the theatre has engaged in outreach projects to young children.

A strong characteristic of central Winchester is the network of streets fronted by shops, pubs and restaurants. The town centre was (allegedly) the first in the country to be pedestrianised and, due to a large part to the number of visitors to the City provide an intensity of use round the clock. The active street frontages and the high number of residential properties within and close to the town centre support self-surveillance. This is underpinned by schemes such as Pubwatch and Shopwatch implemented through the City centre partnership to help local businesses tackle petty crime. The City also benefits from an extensive CCTV network. The urban environment is attractive to locals and visitors alike and provides an appropriate framework for civilised and responsible behaviour.

The town supports a number of open spaces, in particular those around the Cathedral Close which provide opportunity for relaxation within the City itself. However these tend to be of a formal nature and experience high visitor pressure.

Winchester is home to a growing number of service and creative industries, and benefits from a low level of unemployed (less that 1%). There is clear evidence of significant investment in the urban environment, ranging from paving schemes, to planting schemes and public art. Commercial activity and prosperity is positively promoted. Economy and tourism is part of the leaders portfolio. There are two project aimed at supporting the towns economic wellbeing – the Winchester Business Improvement District and the opening of a new Business Centre to support local enterprise. Business are recognised and promoted through Business Excellence Awards.

There are proactive programmes encouraging economic opportunity, including awards for food businesses which are provided through tourism marketing. “Winchester – Towards our Future” is a visioning document aiming to provide knowledge and creative industries, supported by the universities. A framework for providing the early evening economy, with its diverse range of opportunities.

There is limited evidence of local partnerships in respect of visitor welcome and orientation boards, the majority of funding appears to be public sector.

Environmental sustainability is pursued through a range of initiatives including a climate change action plan, a biodiversity action plan, an air quality management plan and the Council’s sustainability strategy. The programmes introduced by the Council seek to provide social inclusion (e.g. reaching out to minority groups); cultural needs as met through a range of activities and economic growth is encouraged across a wide range of needs.

The urban form of the town has been heavily determined by local topography and geology. The River Itchen flows north-south between two opposing hills, and Winchester was founded in the site of a ford across the river. Urban development now is determined by the historic street pattern that has evolved in response to this context.

Winchester seeks to “recycle” its buildings by giving them new purposes and uses, particularly through planning and conservation policies, which aim to manage the city’s historic environment. Certain initiatives have been introduced such as introducing environmentally friendly basis, which will reduce their carbon footprint. Composting and grey water initiatives have been introduced.

Given the compact nature of the City, and the historic streetscape, the challenge is to cope with the daily influx of commuters and visitors. A range of measures are in place – park and ride, with buses to key destination (railway station, shopping centre etc), shopper and visitor car parks, and a cycle-network. This range of initiatives is underpinned by the provision of information including i-kiosks enabling the call-up of local information.

The City is based upon an historic grid layout, with uses subtly but clearly defined – shopping, civic, religious and leisure. The closely laid out streets, civic spaces and pedestrianised areas all support social interactions.

Transport choices range from the “Hoppa” bus services from the Park and Ride to key destinations, to dial-a-ride community buses which collects those who need help from home. The County Council runs a “bikerbout” scheme offering free bicycle loan from three destinations in the City.

There are generally clearly defined boundaries between this range of uses. Whilst initiatives have been introduced to improve movement for non-car users, the divisive effect of the current one-way system on the central shopping area is noted.