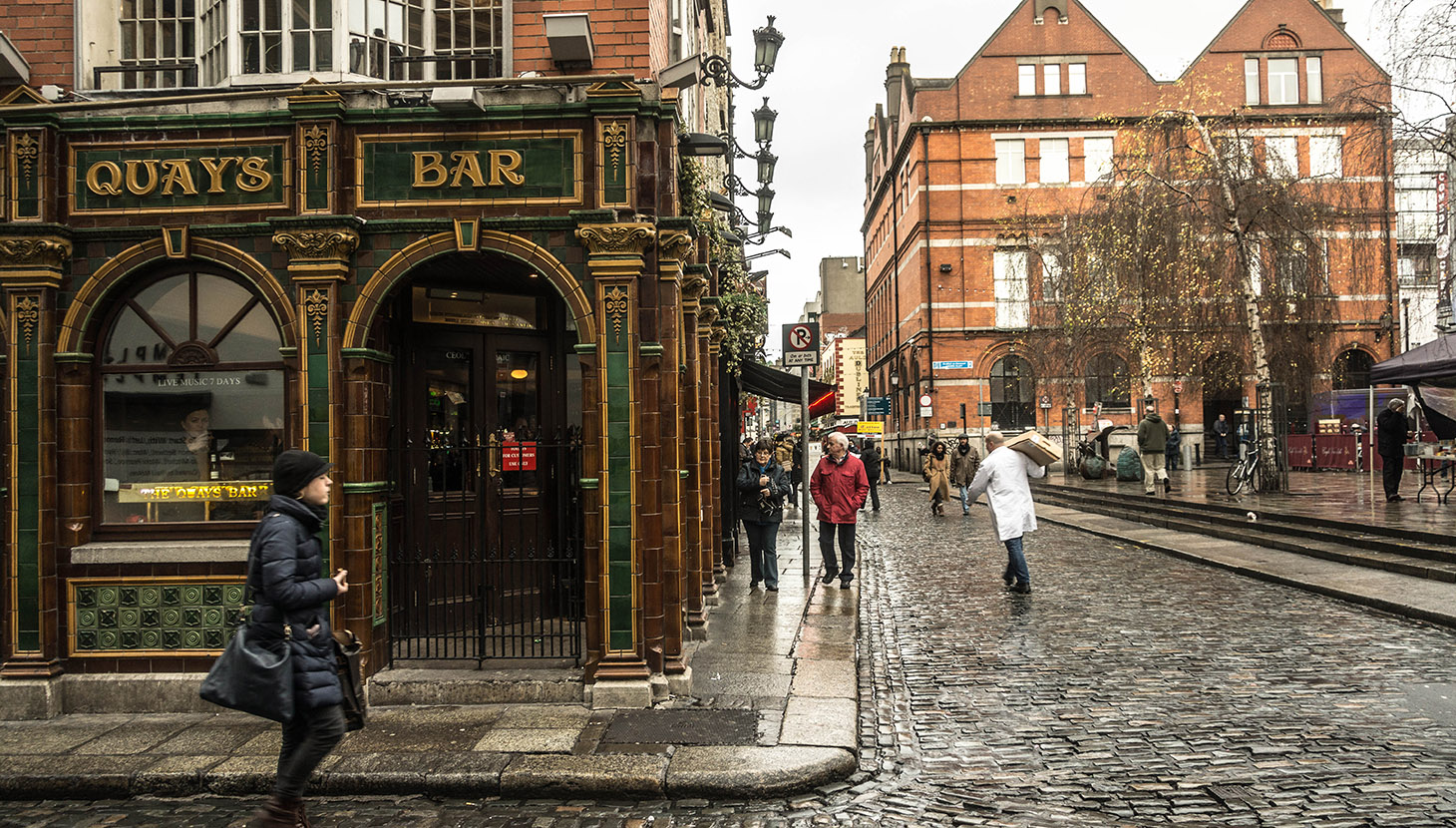 There is supposed to be a natural cycle of decline and renewal that takes place in cities. Neighbourhoods fall into decline, get colonised by artists, become fashionable in a counter-culture sort of way – causing values to rise and attracting developers and established companies. Over time this investment gathers pace, more and more people are attracted to the area, squeezing out the artists that started the process and sanitising the excitement that attracted them in the first place. This process can be see at work in cities across the world, Covent Garden is perhaps the most extreme UK example. A truly great neighbourhood would be one that managed to capture the power of this process without being spoilt by it. Temple Bar in Dublin comes close to this.

Temple Bar named after Sir William Temple, whose house once stood on the site, has been part of historic Dublin for centuries. It includes a number of historic buildings such as Ireland’s oldest theatre built in 1622 but it is not the most beautiful or historic part of the city. In the late 1980s it was designated for clearance to create a bus station and the bus company started buying up properties. Many of the purchased buildings were let on short leases to cultural organisations and from this core of people something interesting started to emerge. The area became a base of artists and independent shops and these new residents started a campaign to save the area from demolition. The culmination of this came in 1991 when the government reprieved the area and designated it as Dublin’s cultural quarter. The properties acquired by the bus company were transferred to Temple Bar Estates, a regeneration organisation that therefore has considerable assets and financial muscle.

One of the first things that the government did was to organise an international design competition. This was won by a consortium of local practices calling themselves Group 91 who came together for the competition. Their masterplan is a wonderful combination of careful urbanism and contemporary design. The main elements of the plan were the new Temple Bar Square, a new curving street to increase permeability and a series of schemes in the interior of the area’s urban blocks. The latter included a number of new housing schemes and, the most prominent of the projects, Meeting House Square with its outdoor cinema and public stage.

The masterplan was based on increasing the public realm of the neighbourhood and if this space was to work it needed to be enclosed and animated by new buildings. The masterplan has therefore led to a major programme of investment in 12 cultural institutions, all but three of which have taken root in the area. Today Temple Bar is home to the Irish Photographic Archive, Galley and Photography School, The Irish Film Institute, The Project Arts Centre, The Gaity School of Acting, The Ark Children’s Theatre and the Contemporary Music Centre. Each of these institutions is housed in a new or refurbished building many designed by the original practices that made up Group 91. These buildings are without exception contemporary, winning 25 national and international architectural awards. They illustrate that good modern architecture can enhance a historic urban area. Today Temple Bar is home to 50 cultural and arts organisations together with 2,000 residents and the Temple Bar Cultural Trust (the successor to Temple Bar Estates) runs almost 400 free cultural events a year attended by more that 600,000 people.

There is, and always has been, another side to Temple Bar – the bars and clubs that have been part of the area for centuries. These bars have participated fully in the area’s renaisance and attract hundreds of thousands of people to the area. Indeed to the visitor the Temple Bar experience includes the pubs, the galleries, the buskers on the streets, the public art, the specialist shops and the free events. However it is always a difficult act to keep all of these elements in balance and, for a number of years, the bars have threatened to take over. Dublin, and Temple Bar in particular, became party capital of Europe in the late 1990s attracting stag nights and hen parties from across the UK and beyond. In recent years moves have been made in cooperation with the bar owners to discourage this trade which has in any case spread to cities like Prague and Amsterdam. However the Academy witnessed the tensions first hand on our visit in May 2007 as the police were forced to move-on illegal buskers playing drums and attracting a large crowd directly next to residential property.

In many respects these are the problems of success. Many run-down urban quarters would love to suffer from too much vitality! However it does illustrate that the process of regeneration, once started, is not easily controlled. Temple Bar is a small area, covering just 13 hectares and yet has developed three very successful roles, cultural quarter, residential neighbourhood and leisure destination. As a result it bustles with life and crackles with tension just in the way that cities should. In this respect it has similarities to Soho, another of the nominations although it is sobering to think that all this has been achieved in just 15 years. Whether the three roles of Temple Bar are sustainable in the long-run remains to be seen. There is certainly a need for greater collaboration and urban management to resolve the inevitable tensions. However the tensions will never be removed, indeed if they were the neighbourhood would lose much of what makes Temple Bar a great neighbourhood.