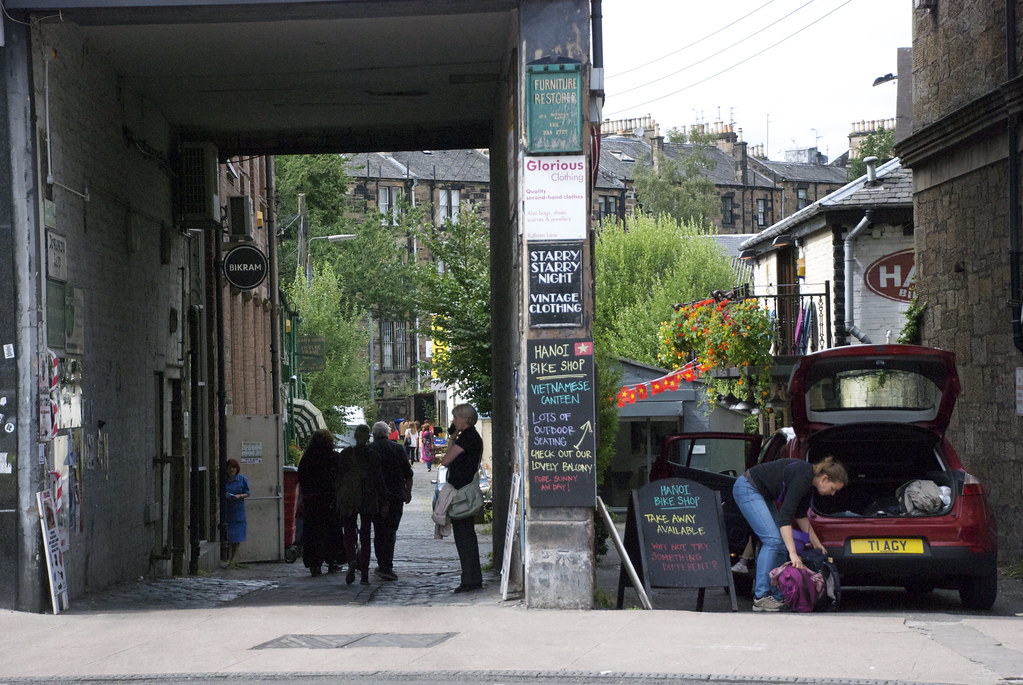 1. The tenement as a flexible housing unit

In the West End tenements mean substantial buildings containing self-contained flats of different sizes, with some having street level front doors. It is a model that is not usually found outside Scotland and has lessons for new high density housing development elsewhere as tenement stair living is undoubtedly a very successful way to encourage community living and a greater social cohesion. The density level, assisted by the large number of tenements in the area, also supports a number of thriving businesses.

It works particularly well when there are a high proportion of articulate and educated residents in the area. It is impressive the way in which the networks of resident and community associations work together, perhaps due to the fact that they are fairly homogenous. There is a strong civic presence that is being promoted from the bottom up. Arguably, the West End is a big tenement, as the mix of a typical tenement stair (and the need to work together) is reflected in the make-up of the area.

In the West End there is an extensive conversion of buildings formerly used for anti-social industrial uses being converted into artist and music studios and other creative industry start-ups who choose the West End as home. Although these areas are often transitory and are part of the gentrification cycle, the ownership and management of the area will ensure this does not happen. The West End Festival has built up over a number of years as a nationally significant street and alternative festival event, and could form part of learning about the longer term impact of cultural investment in cities.

4. The central role of educational in local economy

The West End is home to the main campus of the University of Glasgow, which is a useful case study in the impact of opening up a campus to make it more permeable for the community. There is a good provision of, and investment in, schools and nurseries within the area, which is a key to retaining the post-student age group and attracting new residents to the area. It shows how to integrate educational and residential uses in social as well as physical terms.

5. What is a neighbourhood?

Neighbourhoods do not exist outside the context of the city they are located in, and need to be viewed in that context. It could be argued that it is too big to be a coherent neighbourhood, as it covers such a large area. However, the people generally identify with the wider area, whilst focussing their efforts on their local area. It is a potential case study in what forms and sustains a neighbourhood. The area is a good example of a mixed-use neighbourhood, and an excellent model for family urban living.

The West End is a very large area of Glasgow with a population of around 24,500 within which there are a number of smaller communities, sharing Byres Road as their ‘high street’. It could be argued that it is too big to be a coherent neighbourhood, however, local people identify with the wider West End, whilst focusing their efforts on their immediate area. It is a good example of a mixed-use neighbourhood and an excellent model for family urban living.

Within the area there are various ‘stewards’, including Glasgow City Council; the University of Glasgow; over 12 residents associations, community councils and friends groups; the West End Festival; the Byres Road businesses; plus individuals and organisations that all take a special interest in the future of the area.

The dominant type of housing is the tenement, comprising self-contained flats of different sizes, some with street level front doors, but not to be confused with the infamous Glasgow slum tenements. It is a model that is not usually found outside Scotland and, undoubtedly, a very successful way to encourage community living and greater social cohesion as well as offering opportunities to change the style or size of housing you want within the same building. The resulting density level helps support a number of thriving businesses. Another notable feature is the good provision of, and investment in, schools and nurseries.

The main campus of the University of Glasgow is in the centre of the neighbourhood and many University academics, staff and students live cheek by jowl. The high number of students appears to be less of an issue than it is in many other cities and large numbers of young people stay after graduation whilst older people remain in the area, often moving to alternative properties.

The tenement serves as a metaphor for the West End as the social and community mix of a typical tenement stair is reflected in the overall make-up of the area. Community leadership and partnership is a feature of development and change in the West End, and there is evidence of a strong civic responsibility that is being promoted from the bottom up. The well-educated members of the community groups play an active role in monitoring Council policy and taking initiatives within their area.

Local cultural initiatives are central to drawing the neighbourhood together and there are a number of artist and music studios, some of which have been starter units for successful Scottish artists. Often these areas disappear in the gentrification cycle, but in the West End the ownership and management will ensure this does not happen and many creative businesses choose the area to live and work. The West End Festival, promoted by local volunteers and professional venues, and managed by a professional director, has built up over a number of years as a nationally significant street and alternative festival event. It is an exemplar of the positive longer-term impact of cultural investment in cities.

Despite its scale, the West End is undeniably a thriving and sustainable neighbourhood.